Christopher Gold – When the Buzzards Leave the Bones

On the surface, Christopher Gold does not look like your typical folk singer.... 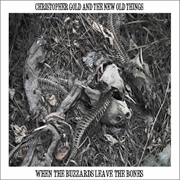 On the surface, Christopher Gold does not look like your typical folk singer. “I played in a punk band for about five or six years called ‘The Dirty Rotten So & So’s’,” Gold told QRO, after being asked how he settled on playing folk music. “I still love punk and metal and hip-hop and things like that, and it’s important to me because I learned so much, especially from punk rock, but folk/Americana/bluegrass is what feels the most natural and honest to me.” Once you get past the tattoos and into the heart and soul of this Wisconsin native, you’ll find a husband, a father, and a community service advocate. His newest album, When The Buzzards Leave The Bones, speaks on all of the things he loves most, with perfectly crafted tunes that will grab your attention and hold onto it until you find yourself back at track one.

When asked what the album is about, “The title is a reference to kind of looking around after something bad happens and seeing what you can make out of whatever is left. That’s why there are so many references to floods and broken bones and all that, but it’s still a relatively happy record.” This is beautifully displayed in the opening track, “Breakwaters”, a song about wanting to be there for someone who’s there for you. Pair the heartfelt lyrics with Gold’s raspy vocals, impressive guitar picking, and the tone is set for the entire record.

While it’s hard to pick out the standout tunes on an overall incredibly written record, there are a few pieces that struck gold (pun intended). The slow songs on most albums tend to be the ones that get looked over, but it would not be in your best interest to skip “Hold On”. There is something so special about Gold’s performance on this piece that makes it so enjoyable and emotional to listen to. “Worse For Wear” is a number about love, with an anatomical twist (“You could trace a roadmap / Of blood through vein from my heart to my hands / And back again / I will love you ‘til it’s gone”). Add in gorgeous harmonies (sung by his wife!) and violin, and this song will be stuck in your head for days. Gold continues to include his family in his music by writing the sweetest song on the record about his son, “Before You Were Born”.

Gold has shared stage with Richie Ramone, Justin Townes Earle, and Rodney Crowell, just to name a few, and is gaining momentum at a pace that will soon make him more than just a Wisconsin musician. Be sure to pick up When The Buzzards Leave The Bones at www.christophergold.com!