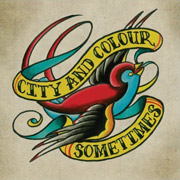 While Dallas Green has become best known as the lead singer/guitarist for punk rock act Alexisonfire, in his home north of the border, he’s been developing a growing reputation for his stripped, emo-folk work as City and Colour (the pseudonym’s a play on his real name, a city in Texas, and a colour – spelt the Anglo-Canadian way…).  This side of Green got exposure in the States last year with his second solo studio record, Bring Me Your Love.  And now Vagrant reissues his 2005 solo debut LP, Sometimes, for America.

Click here for photos of City and Colour at 2014 Fun Fun Fun Fest in Austin, TX in the QRO Concert Photo Gallery

Click here for photos of City and Colour at 2014 Riot Fest in Chicago, IL in the QRO Concert Photo Gallery

Click here for photos of City and Colour at Orpheum Theatre in Boston, MA on September 14th, 2013 in the QRO Concert Photo Galler

Click here for photos of City and Colour at 2012 Catalpa Festival in New York, NY in the QRO Concert Photo Galler

When one hears punk singer releasing a sad, stripped record, one immediately jumps to thoughts of emo, but while Green certainly is emotional on Sometimes, it’s a stripped-folk kind of emotion, coming in on the terrain of many an alt-singer/songwriter. He does plead too much, and some of his tracks go on, but this ain’t Dashboard Confessional or Saves the Day (or whoever it is that you think of when you think of emo). Green is sometimes better when he adds some energy, like with the penultimate “Casey’s Song”, but there’s also moments where the sad strum holds up well, just alongside his acoustic guitar, such as on “Hello, I’m In Delaware”.

“Delaware” is also the best song about the ‘first state’… by default, so it’s good that the track has finally made it The U.S. (though his “Sam Malone” was a bit of a dated reference, even in 2005).  While Bring Me Your Love went bigger, with more instrumentation for the bigger-is-better America, Sometimes is the stripped, simple, Canada.