It takes two experimental musicians to TANGO. That is, Truly Autotune Never Gets Old. Or does it?... 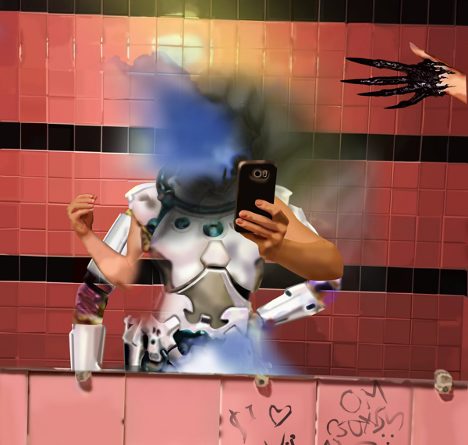 It takes two experimental musicians to TANGO. That is, Truly Autotune Never Gets Old. Or does it? Texas-based Claire Rousay and More Eaze resume their creative collaboration with 2022’s full length Never Stop Texting Me. As with any partnership you hope that the whole is more than the sum of its parts, but the aspirational pop balladry of most tracks (liberally iced over with layers of autotune and unmotivated samples) might leave some fans feeling shortchanged.

If you caught their previous joint project, the well-received an afternoon whine (2021, Ecstatic), you heard an effort that more centrally showcases the experimental genre work of each artist, dipping into noise, drone, and found sound. The release has about the same run time as the latest Never Stop Texting Me, but feels much shorter in many ways. Credit this trick-of-the-ear to the otherworldly moments in an afternoon whine, in which truly surprising juxtapositions of sonic texture gurgle up out of the morass of sound samples and instrumentation. The earlier collaboration will never be the party album that you blast out your car stereo on a hot summer night, but it’s full of intimate, memorable moments.

Never Stop Texting Me, on the other hand, aspires to be that crowd-pleasing, boombox album. It’s hunting for Kesha epiphanies. It’s not quite dancefloor material. The chiptune ethos is a bit too spastic for satisfying rhythmic flexing. Nonetheless most songs feel dominated by a desire to move your body. You’ll give a faint pump of the fist, for example, to the propulsive perkiness of verse and chorus elements in “kyle” and “iphone2”. While the autotuned vocals are often indecipherable, the emotional center of the lyrics is easy enough to pinpoint. Get up & get down! These songs are light pop fare, heavily syruped and seasoned in electronic ephemera, while still built atop a more conventional song substructure. There’s even a guitar solo in “hands”.

When the autotuned pop ditties veer toward the milquetoast in form and concept, Claire Rousay and More Eaze hit the panic button. Usually by way of tossing a mind bending found sound sample into the mix. Maybe it’s at the start of the track, like “missed”, which opens onto an electro-sleazed found sound sample of anonymous debris colliding into itself. Maybe it’s at the end of a track, like “camille”, which drops off a cliff into random sample-cum-piano noodling in the last 45 seconds. Maybe it’s both the start and end of the track, like the gritty dronecore intro and field recording of rainy puddles outro of “same”. The duo used a similar approach in an afternoon whine but the move feels less effective in the latest collaboration. Perhaps because the songs on this album want to find their destination as pure pop excess, but the musicians haven’t fully resolved whether they are going along for the ride.

There are transcendent moments in Never Stop Texting Me, but they are too few and the autotune is too relentless. We’ve already arrived at the autotune saturation point. We might even be beyond the post-ironic rehabilitation of autotune. Not even the ingenuity of reframing once-familiar sounds – a gift common to found sound artists – can save the auto-mono-tuny induced ear fatigue. The album feels like a transitional moment in the collaboration of Claire Rousay and More Eaze: from experimental/drone/found sound mashups, to the neon zenith of a reimagined hyper-pop for the 23rd century. But we have not yet arrived. Fans of the pair can consider this album a minor contribution to their growing body of impressive work.