QRO peers down its stethoscope for the second-greatest band from Liverpool, Clinic. ... 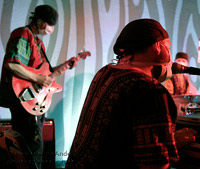 QRO peers down its stethoscope for the second-greatest band from Liverpool, Clinic.

Review of Do It!

Interview with Ade Blackburn in 2008

Live review at Doug Fir Lounge in Portland, OR on November 17th, 2010

Review as part of Le Guess Who? Festival at Tivoli Oudegracht in Utrecht, Netherlands on November 30th, 2012

Interview with Ade Blackburn in 2013

Review of Wheeltappers and Shunters

Clinic playing “Monkey On My Back” live at Bell House:

The Antlers – Green To Gold