<img src="http://www.qromag.com/wp-content/uploads/2010/11/clinicnov17.jpg" alt=" " />On a cool, rain-soaked night in Portland, Liverpool's Clinic seemed to be all about taking care of business. ... 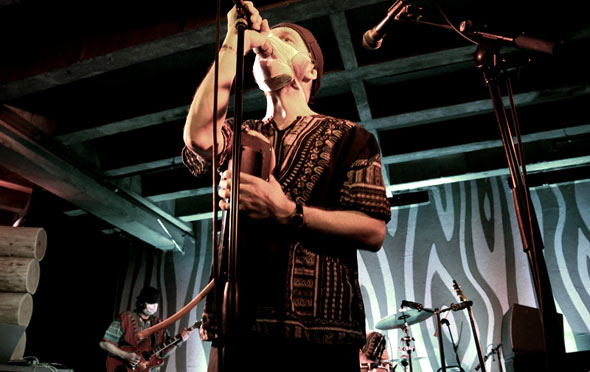 Everyone expects the members of Clinic to cover half of their faces with surgical masks, but it was another story when it came to the rest of the getup.  The quartet wore Hawaiian shirts, in support of their previous album, Do It! (QRO review), citing lighter and brighter tone than their usual dark and cryptic soundscape, as well as an homage to the Beach Boys.  Their sixth studio album, Bubblegum (QRO review), makes the biggest shift away from their homogenous style, trading in the lo-fi, discordant rhythm and chord, for more refined, and harmonious compositions.  They too, have caught a bit of the chamber pop fever – evident from the first single and album opener: "I’m Aware".  The new, ‘lush’ Clinic takes a bit of getting used to – especially live.  Fortunately, several numbers from their more abrasive, post-punk period kept the set from becoming a lounger.

The surgical masks are Clinic’s way of taking things not too seriously; but on a cool, rain-soaked Wednesday night on November 17th at Doug Fir Lounge in Portland, OR, the Liverpudlians seemed to be all about taking care of business – and not much else.  The quartet entered

the stage, as if they were clocking in for work, and played their set, like it was just another day in an assembly line of a motor company.  Though the more polished production of Bubblegum might have suggested attires in the formal category – like tuxedos – the Brits chose dashikis, paired with matching black scrub caps.  At least, the African shirts complemented the stage, dimly lit with psychedelic colors, even if it didn’t amplify the music.

New materials comprised the first half of the twenty-song set, while overall, early numbers from Clinic’s self-titled three-EP compilation, and Internal Wrangler (both 2000), dominated the session, with no representation from 2004’s Winchester Cathedral.  Kicking it off with the wa-wa guitar-laden title track of their latest album, "Bubblegum", Ade Blackburn (QRO interview) crooned through the opening of his white 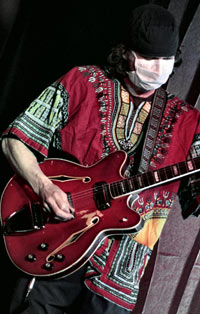 mask.  The audience tolerated the newer tunes, but they couldn’t wait to let loose on the ‘classic’ tracks.  Their wishes were finally 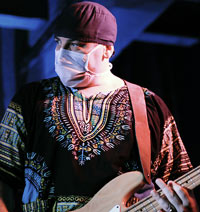 granted with the seventh song: "Monkey On Your Back" (2000), which had some people shake their bodies in frenzy, as the music escalated in its speed, and vocals became more menacing.  But the men in masks seemed indifferent.  Bassist Brian Campbell was the only one who looked comfortable.  Clinic’s music does have that unsettling aura… whether the product is an extension of the creators, or if the operators are merely the apparatus – is unclear. 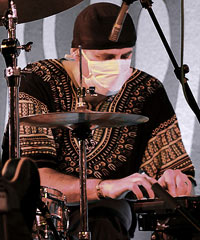 After awhile, not surprisingly, Clinic’s concert felt like one long composition – with little breaks in between.  Sufjan Steven’s twenty-five-minute number "Impossible Soul" (QRO album review) has more diversity within that one song than the hour-long set by the English group.  Except for drummer Carl Tunney, the band members all took turns at the keyboard.  Blackburn brought out their trademark instrument, melodica, for few tracks, and blew on a harmonica through his slotted mask for "Porno" (2000).  For the finale, the fans shouted out "no!" on "Walking With Thee" (2002), which helped to highlight the vocals that often seemed to get lost in the instrumentation.  The only words uttered in between the songs were from Blackburn, to occasionally thank the audience, or to introduce the songs.  Then the four musicians in matching outfits exited the stage, as if the alarm went off, signaling end of the work shift. 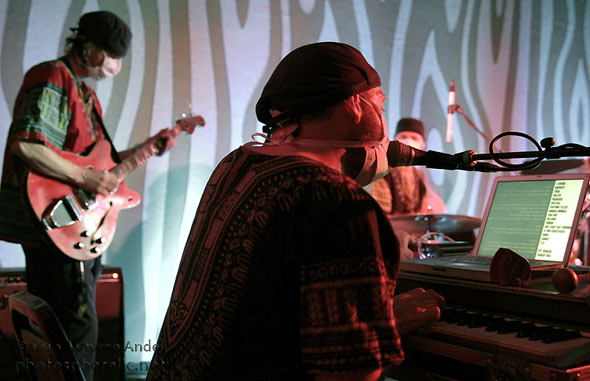