<img src="http://www.qromag.com/wp-content/uploads/2007/10/cmjday1final.jpg" alt=" " />CMJ started off with a bang on Tuesday, October 16th, as the Puck Building turned into indie-kid central during the day, only to migrate to...

CMJ HQ The Puck Building was indie-kid central on the first day of CMJ, as people lined up to get their badges and gift bags, but only one band really impressed.  The Bowery Ballroom was a whole other story, as every act delivered something special.  It was still the ‘place to be’ for most CMJers, though things started an hour later, as Montreal’s Miracle Fortress were stopped at the border. 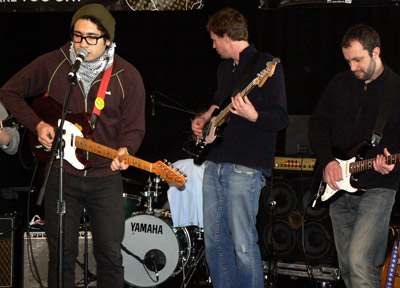 Brooklyn’s Takka Takka had some sweet indie sounds on display at the CMJ Day Stage in Bowery’s Puck Building.  The ‘trade show’ setting (it’s also where you pick up your badge) isn’t a perfect atmosphere for any band, but keeping things a little higher and clearer definitely helped out.  In a way, it really belied the theme of their set’s finisher, the title track to their recently re-released We Feel Safer At Night. 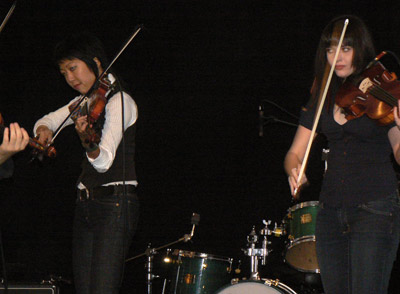 The Section Quartet are a two guy, two girl string ensemble that does instrumental covers of well-known alternative songs, Radiohead, Yeah Yeah Yeahs, Postal Service, and others.  Certainly nice to listen to, and the songs are familiar enough to catch your ear.  But can they exceed being a novelty/gimmick act? 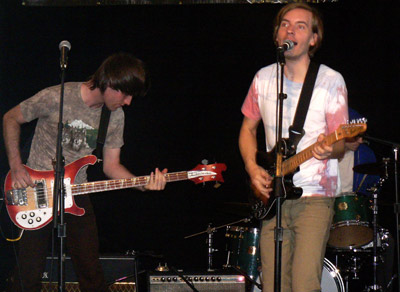 Saturday Looks Good To Me played a bright inde-pop that’s certainly sweet, but doesn’t exactly bowl you over.  Still, it’s well-fitting for the daytime, no matter what day of the week it is. 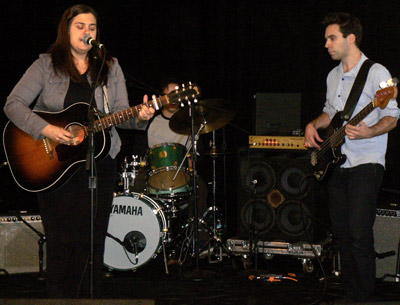 Singer/songwriter Jennifer O’Connor delivered some nice alt-country, very much in the vein of Neko Case and others.  Good, enjoyable, she’s probably better on recording, as live, she’s a little underwhelming. 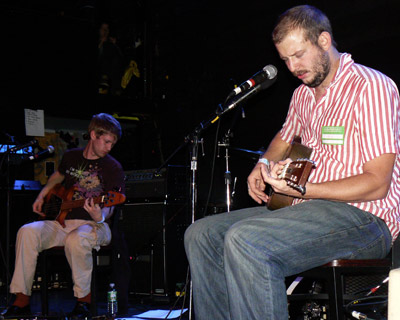 Lizzie Powell from Land of Talk (QRO interview) and Kelly Crisp of The Rosebuds (QRO interview) raved about Bon Iver, and even though they had ulterior motives (Powell is dating Bon Iver singer/guitarist Justin Vernon, who also used to play guitar in The Rosebuds’ touring band), they weren’t wrong.  The band’s sad, heartfelt indie-country resonates well, and Vernon has a funny, self-effacing quality that lightens things up between numbers.  With border security stopping Montreal’s Miracle Fortress at the U.S.-Canada border, Bon Iver started an hour later to a much fuller room, and deserved to.  With an album but currently unsigned, the band is in talks with a number of labels, including Jagjauwar and Rosebuds’ Merge, and was seen being chatted up by other industry folks at Bowery Ballroom. 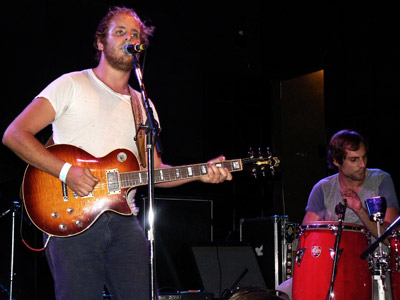 The other band to benefit from the ‘Miracle Bump’, Portland’s The Shaky Hands took alt-country in the absolute opposite direction, putting a freak-fun sping on things (reminiscent of Dr. Dog).  Singer/guitarist Nick Delffs appears to have taken QRO’s advice from the review of their self-titled debut (QRO review), and learned to sing less nasally.  And, as predicted, they’ve taken a big step up with that out of the way.  Probably the least looked-forward-to act, they were the most surprising.  Southerly – Krist Krueger, the Portland singer/songwriter/booking agent (QRO interview) – would be proud. 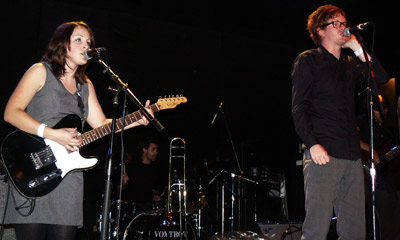 With Miracle Fortress out, The Most Serene Republic had to hold up the Maple Leaf on their own at Bowery Ballroom (not quite so hard, considering there’s like a million people in the band…).  And an admirable job they did, moving the night’s sound across the northern border to a Canadian-style collective rock (when one attendee overheard they were described as sounding like Broken Social Scene, he quickly interjected, "They’re better than Broken Social Scene!").  Playing off of Population (QRO review), the band benefited from the larger ballroom, over Maxwell’s a few weeks earlier (QRO live review), where their expansive, pressing sound could really stretch itself out.  The singer was funny as always, commenting on how "I’ve got nothing to say for New York" and, once again, riffing on how everyone’s got blogs and is "critiquing us right now."  The brought the house to a crashing, exploding, exciting finale with "Present of Future End". 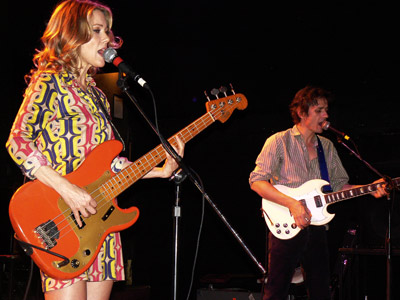 The next best thing to a Luna concert, Lunatic twin core of Dean Wareham and Britta Phillips delivered a melodic, harmonic set that touched many a heart.  Employing yet another alt-country vibe, this one more sweet and serene than Bon Iver, but way less funky than The Shaky Hands, Dean & Britta (& Adam & Ben – drums & keys) softly enchanted Bowery with tracks off their latest, Back Numbers (QRO review).  Oh, and if she weren’t married to indie all-star singer/guitarist Dead Wareham, singer/bassist Britta Phillips would inpsire Emily Haines of Metric-meets-Amanda Tunnen of stellastarr*-level obsession from male fans. 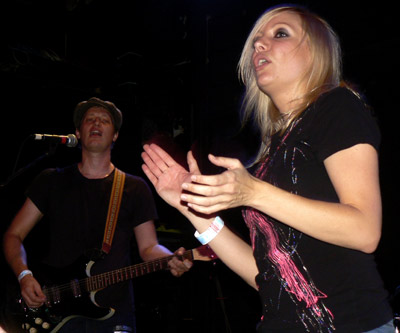 Keeping the ‘married couple with hot blond wife’ thing going (where’s Mates of State?  Hell, where’s Sonic Youth?), The Rosebuds returns to Bowery Ballroom to rock the crowd harder than any band before or after this evening.  They stuck mostly to great tracks off of their latest, Night of the Furies (QRO review), though unfortunately skipped Kelly Crisp’s (QRO interview) incredible "I Better Run" ("ran out of time"), but they did take a detour "Back To Boston" (from prior release, The Rosebuds Make Out).  With "Boston" and excellent Furies tracks like "Cemetery Lawns", "Get Up Get Out", and "When the Lights Went Dim", they charged up a super-excited core that was front and center (despite only having a drummer as extra support).  That energy waved out onto the industry press, who were, for the first time that night, outnumbered and outgunned by ‘real’ fans, proving who exactly the headliner was. 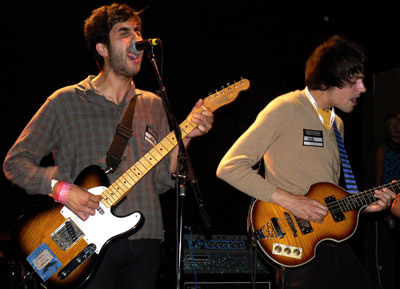 Fresh off of two nights at Music Hall In Williamsburg, Voxtrot, the youngest act on the bill, closed out Bowery.  While their fans weren’t quite as dedicated as The Rosebuds (it was a school night, after all…), there were still more than enough to demand – but be denied – "Trouble", from their self-titled debut LP ("we haven’t played that in years").  Though they also skipped Voxtrot stand-out "Steven", which had proved the doubters at QRO wrong at Siren (QRO Siren recap), Voxtrot still kept up the good work to finish the first night of CMJ.

Harlem Shakes (QRO interview) at Gibson Showroom for KEXP session – one has to show up 15 minutes before the scheduled start time (as if 10:00 AM wasn’t bad enough…).