Only starting in the early evening meant missing some great afternoon acts, but fun was had at White Rabbit, before heading north to the Chelsea/Gramercy area to hit two venues that were experiencing their first CMJ, for two big Austin bands. 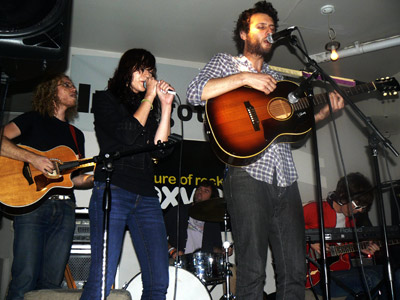 QRO favorites Sam Champion (QRO interview) hit WOXY with an acoustic set of material off their when-oh-when-are-they-going-to-get-a-label-to-release Heavenly Bender.  There were some level issues as Champion attempted something "we’ve never done before – in front of people."  Everything was given more of a sixties-pop sheen than at regular live shows (QRO live review), with keyboardist/guitarist Sean Sullivan’s keys veering into the Casio.  Sullivan also closed things out with his "What If You Knew", standing on his rickety chair and knocking over his keyboard.  Holly Miranda of Jealous Girlfriends (QRO photos) also jumped on stage for "Like A Secret", but it was Sullivan who stole the show. 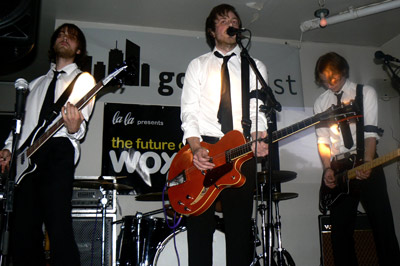 While everyone else who played for WOXY had to do it acoustic, finishers iLIKETRAiNS got to rock electric, like God – and British Rail – intended.  While one’s curiouslty about how the UK post-rockers would have handled things acoustic, was left unsated, the band was able to fill the small, chic White Rabbit with their expansive sound.  It all might have been a bit too much for the crowd, weened on the plugged-in unplugged that had been playing all day until then, but Progress/Reform (QRO review) pieces like "A Rook House For Bobby", new ones off the yet-to-be-released-in-America Elegies to Lessons Learnt, and the band’s destructive, explosive, crashing set-finisher closed out Thursday’s WOXY session on a high note 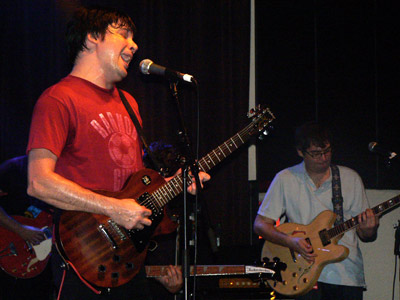 It was the best of times, it was the worst of times at Highline Ballroom.  Some things were done right: more paid ticket holders than any other CMJ show so far, $4 Rollick Rocks, and a packed house.  Some things were not: set times were abandoned early, the bars were short-staffed (leaving the bartenders who were on the clock inattentive and snappy), and there was a bored, alof, faux-mensroom attendant sitting in front of the one of the stalls in the small mens bathroom.  The crowd of loyal Trail of Dead fans had to endure two women-and-a-DJ hip-hop act Yo Majesty, including the ladies demanding – and getting – more time on-stage (despite the three-quarters of the crowd who couldn’t have been less interested in them).  What’s more, the overweight woman took her shirt off – something nobody needed to see. 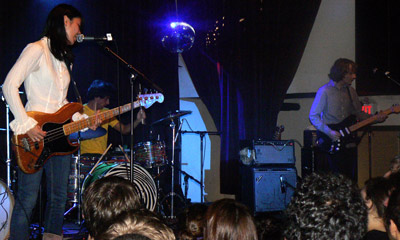 While their new album, Grass Geyser Carbon Clouds, has some definite high points, live, Enon are just good, not great.  The three-piece’s indie-garage sound doesn’t seem quite formed enough on stage.  They have the feel that they should be playing free, day showcases, or in cramped Bowery venues, not following …And You Will Know Us By The Trail Of Dead at the big Highline Ballroom. 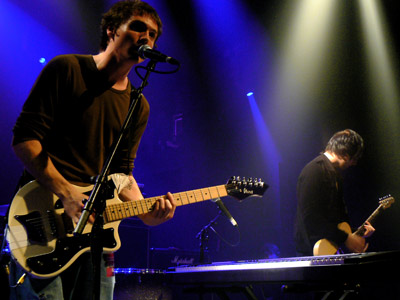 How come the British can do that indie-garage thing so much better than Americans?  The U.K’s Air Traffic opened the Blender Late Night Session at Gramercy Theater at 1:00 A.M. with some impressive, emotional rock.  While there were some balance issues (one side had too much guitar and not enough bass, while the other, just the opposite), Air Traffic pushed on through "their soundcheck".  With an album coming out in February on Astralwerks, they skies look clear. 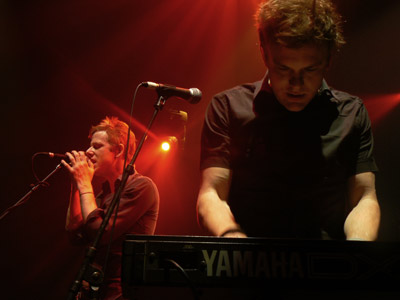 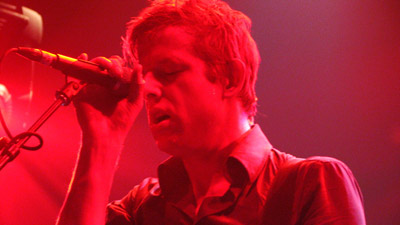 Skipping the 1990’s for some reason (not the first time for a Spoon opener – QRO live review – and who really cares why?), Spoon hit the Gramercy stage at two in the morning to a packed badge/list-only crowd.  With a set roughly divided between the recent Ga Ga Ga Ga Ga (QRO review) and older hits, Austin’s finest rocked the wee hours with such greats as "The Beast and Dragon, Adored", "The Way We Get By", "Don’t Make Me a Target", and "You Got Yr. Cherry Bomb" (unfortunately, Britt Daniel & co. forgot their horn section, and so Ga stand-out "The Underdog" wasn’t on the menu).  For many late CMJ arrivals, this was their first show, and for others, the replacement for getting to see the full Spoon complement Saturday at Roseland Ballroom.  Either way, it was a great reason to stay up late.