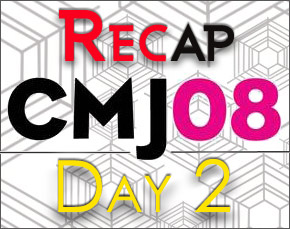 After seeing virtually all new bands in Day One of CMJ, Day Two was dedicated to old favorites.  Starting a bit later than yesterday, and having been a bit burned by the new acts then (QRO CMJ Day One review), it was mostly already-familiar solid NYC performers – along with double-duty on one semi-new fella.  The day again started out at Piano’s (QRO venue review), but then it was off to the first day of FADER Fort.  Webster Hall’s (QRO venue review) new downstairs Studio @ Webster Hall somewhat failed to impress, but Mercury Lounge (QRO venue review) reliably closed things out right. 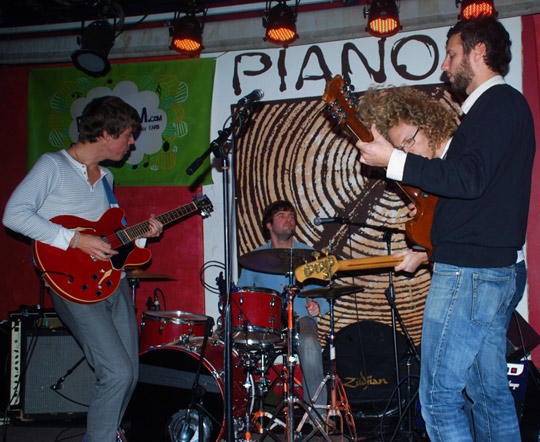 Starting with a very old favorite, Sam Champion.  Their seventies guitar-rock is kind of timeless – doesn’t feel like a retread or an homage, but just rock.  Noah Chermin (QRO interview) joked about AM New York picking them as the “#1 band to see during CMJ” – and that AM New York is “pretty much the authority on CMJ”.  He also remarked on their one-band mission to get rid of that space in the front of them (such reticent crowds, during the afternoon), and said they were playing “deal-making music” (hey, they did finally get out Heavenly Bender – QRO album review).  A band that’s been plugging away for awhile now in New York, they still manage to be relaxed on stage (QRO live review). 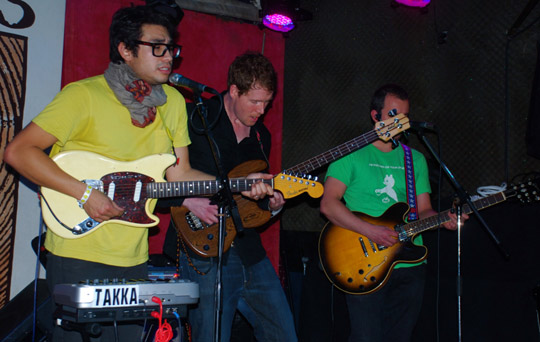 Playing literally fifteen minutes after another set at Cake Shop (QRO venue review), Takka Takka still had more energy than had ever seen in them before.  Their new record, Migration (QRO review), is less bright than their debut, We Feel Safer At Night, and that seemed a mistake at first – until seeing them at CMJ.  From the start with top Migration track “Everybody Say”, Takka Takka’s lead singer/guitarist/keyboardist Gabe did these jerk-like movements that brought to mind St. Vitus’ Dance – or zombies.  In fact, the whole set felt the music of the countryside after the plague – haunting, even monk-like in its solitariness, but also post-modern (as well as just modern)  The music built and built into a high elegy of what’s been lost and what remains, empty houses, buildings, highways, and byways.  As opposed to ill-fitting outdoor daytime sets (QRO photos), the indoors of Piano’s put exactly the right frame on the band. 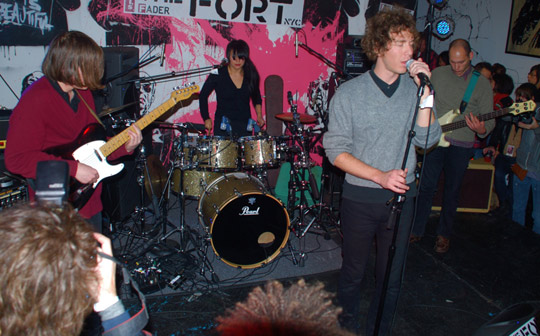 FADER Magazine started another CMJ week-long party at their ‘FADER Fort’ at the corner of Bowery & Delancey, and they got an up-and-coming local band in Crystal Stilts.  One of the millions of shows Crystal Stilts is playing this CMJ, this was the first time they weren’t better than the last time (QRO photos) – but that was really due to the venue, not the band.  FADER seemed to have found the longest, thinnest space for their Fort – then put the bar next to the stairs, and across from some giant statue made of cardboard boxes, creating the ultimate bottleneck – and it was only tighter up front at the stage.  One could even understand Stilts’ guitarist refusing to turn around and face the multitude of flash bulbs… 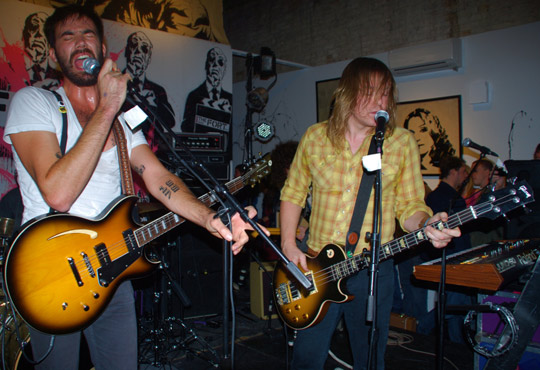 The only really ‘new band’ seen on Day Two, that’s only because this is the first outing for Death From Above 1979’s Sebastien Grainger solo.  Their rocking was strong, but a little lost in the haze of FADER Fort’s punch… 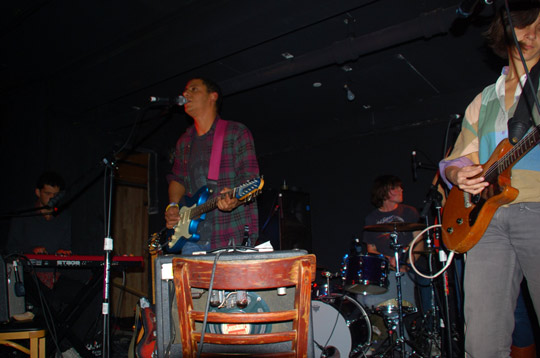 Webster Hall’s new downstairs Studio had its second day – but wasn’t too impressive.  Partly, that was from getting their just as The Jealous Girlfriends (QRO interview) finished their set – and having to hang around for seemingly ever to see Miles Benjamin Anthony Robinson.  Fancy but low-ceilinged, Studio @ Webster Hall is certainly more of a dance area than rock venue – something that probably didn’t help Miles Benjamin Anthony Robinson (QRO photos) & his backing band (which now featured a girl, too). 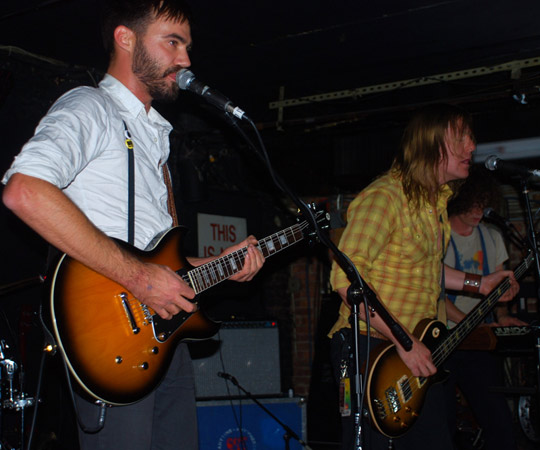 Saw two sets ‘by accident’ – and they were both by Sebastien Grainger.  Mercury Lounge was certainly the stronger one, more punk-rockin’ and up-tempo like his solo debut, Sebastien Grainger & The Mountains (QRO review). 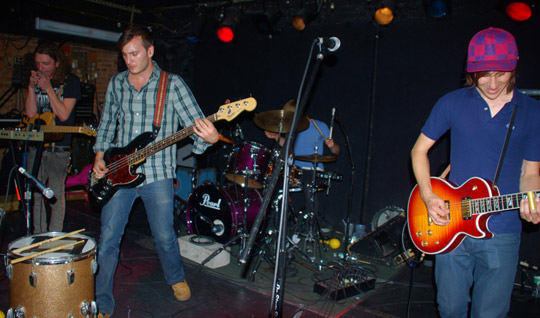 Another New York band that’s been playing a lot, this was still Bear Hands’ (QRO photos) only CMJ show – they head off for England for a tour with The Holloways (unfortunately, guitarist Ted Feldman can’t go with them – damn school!…).  They were definitely loose and having fun, with a crowd full of friends psyched for them – even if they didn’t play “Long Lean Queen” (saving it for Her Majesty’s realm…).  Singer/guitarist Dylan Rau & bassist Val Lopez were particularly fun-loving, Val playing from the crowd early on – and Dylan literally jumping on his back: 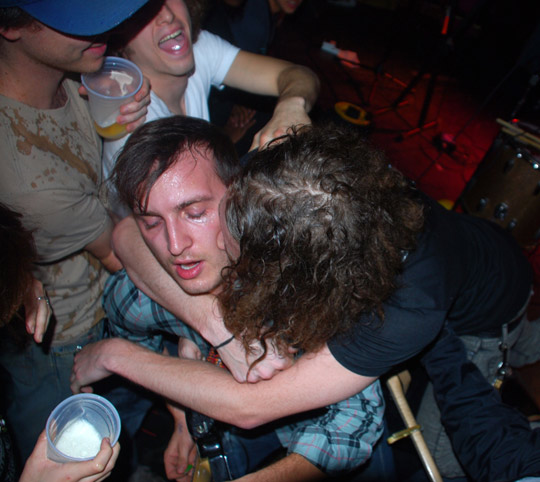 -Physics of Meaning @ Bell House (QRO venue review), 6:00 PM – 7:00 PM.  Gothamist shouldn’t have put their day stage so far away from everything else.

-Saw stellastarr*’s (QRO spotlight on) Michael Jurin & Amanda Tannen when getting pizza on Houston, near Mercury Lounge (and she’s even better-looking up-close…).

It’s a Musical : The Music Makes Me Sick