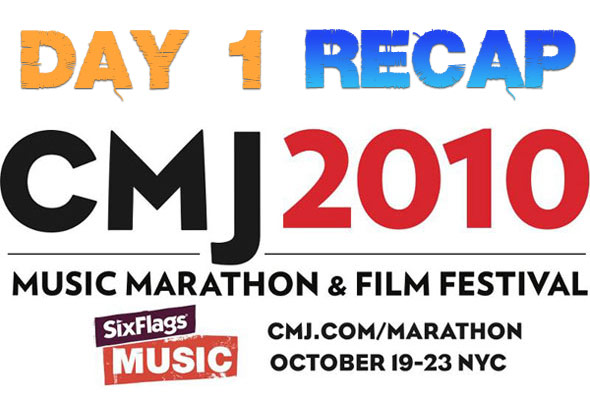 What does CMJ stand for?  In literal terms, it once stood for ‘College Music Journal’, but has since evolved to just the initials, a-la ‘Kentucky Fried Chicken’ into just ‘KFC’ or ‘British Petroleum’ into just ‘BP’ (and don’t think CMJ doesn’t love those associations…).  But where does alternative/indie music stand these days, where file-sharing, iTunes, iPods and the rest are all yesterday’s news?  QRO might not have figured it over the five-day CMJ Music Marathon at venues across New York City, Tuesday-Saturday, October 19th-23rd, but had fun trying: 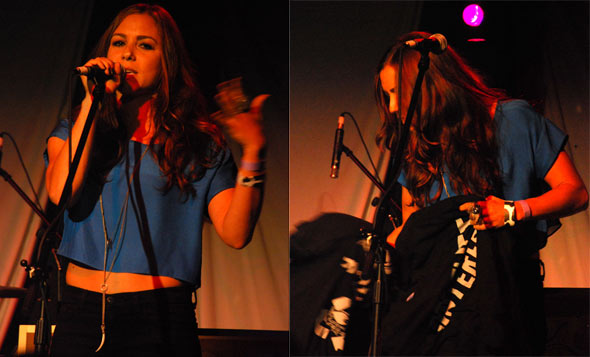 The day before CMJ started, there were your pre-parties, most notably the one from Rachael Ray’s company The Syndicate.  Annually dubbed the ‘Conflict of Interest Party’ due presumably to the presence on the line-up of Ray’s husband’s band The Cringe (QRO photos from last year’s party), this year the line-up was thankfully free of his awful band.  Unfortunately, it was still held at the awful Rebel, a club that holds seemingly no other concerts throughout the year – and there’s a reason for that, with a cramped, awkwardly shaped ground floor, to further levels that gave no view of the stage, and poor acoustics all around.

Comedian Allison Hagendorf had the unenviable task of serving as MC, and her follow-ups of "I can’t hear you!" to her "Is everyone having fun?" seemed more sad than anything else.  Not even free t-shirts could get the squeezed crowd going – though, if you’re going to be giving out free t-shirts, go the extra mile and get a t-shirt cannon (like British Sea Power did at 2007 Norman Music Festival – QRO photo). 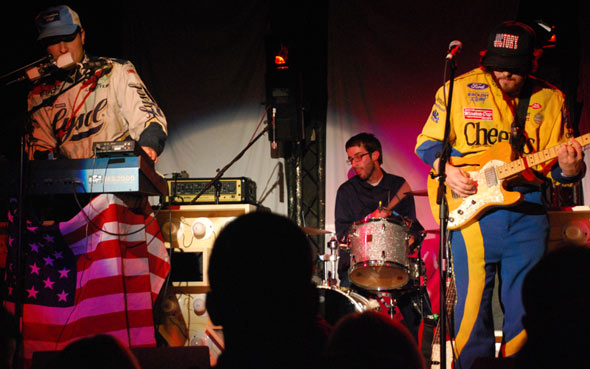 Nada Surf (QRO live review) was the headliner, but everyone on the rest of the bill were either comedians (the party was also sponsored by Comedy Central’s new underwhelming Nick Swardson’s Pretend Time) or bands you’d only heard of because they were playing later during CMJ (actually, so was Nada Surf).  Only stuck around to catch a bit of Date Earnhardt Jr. Jr. – like a white American Chromeo (QRO live review).  The most interesting thing about them was their outfits (if they continue as a band, are they going to have to always wear them?).

Last year’s Syndicate party had a great gift bag, including a copy of The Onion‘s AV Club book, but all the gift bags were long gone by the time I left. 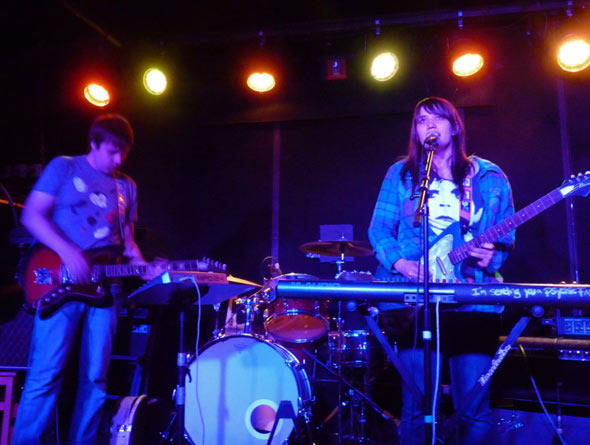 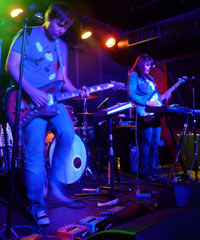 In the beginning when God created the heavens and the earth, New York City was a formless void and darkness covered the face of the deep, while a wind from God swept over the face of the Hudson.  Then God said, "Let there be CMJ"; and there was CMJ. And God saw that CMJ was good; and God separated CMJ from the rest of the music calendar.  God called CMJ a "music marathon & film festival," and he called the rest of the calendar year "preparation for CMJ."

But lo, there is another time apart from these times that has been passed down to us from the prophets.  It is a pre-time.  A proto-time.  A primordial-time.  A pre-proto-primordial-Ur-time.  And it was in this Spanless Tyme that Chicago’s beloved Panda Riot took the stage for a CMJ pre-party on a Monday night at the Rock Shop.

The four-piece had stripped down to its original two-person team of Brian Cook and Rebecca Scott, a lineup that hasn’t seen the light of day since the band’s inception in Philadelphia.  The duo sparkled, floating acerbic rock chord shimmer alongside feather-light cascades of choral arabesque.  A pulsing digital beat kept the night moving while Mr. Cook scrounged hardscrabble electric catgut textures out of his guitar, with liberal use of a whammy bar for a caustic, trembling effect reminiscent of Mecca Normal.  Ms. Scott’s softened the rough edges with her standout vocals.  Points subtracted for too many prerecorded tracks mucking up the purity of the live music experience – but chalk that up as a necessary evil this time around.

A motley bill rounded out the night, proving what everyone already knew about CMJ:  it’s a fest made for show-hopping.  After Panda Riot, the only other act to look forward to was Home Video (QRO album review).  But God knows it wasn’t worth waiting through the next act, led by a keytar-toting frontman, to see them.  This correspondent bounced. 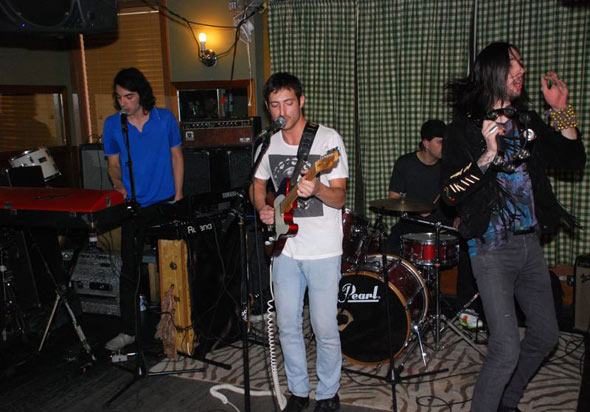 Click here for photos of Electric Tickle Machine at Northside 2010 in Brooklyn, NY in the QRO Concert Photo Gallery

Click here for photos of Electric Tickle Machine at CMJ 2009 in New York, NY in the QRO Concert Photo Gallery

Click here for photos of Electric Tickle Machine at 19 Belvidere in Brooklyn, NY on August 7th, 2009 in the QRO Concert Photo Gallery

Spent much of the daytime getting my badge – which wasn’t itself difficult, but had to do some name switching on another badge.  Postponed picking up my schwag bag (underwhelming schwag, but a great actual bag) to kick-off CMJ proper by making my first band of CMJ 2010 the same as my last band of CMJ 2009 (QRO Day Five recap), Electric Tickle Machine.

Upstairs at Piano’s (QRO venue review) during the day was not exactly ideal for the rollicking ETM, with fans either seated or too distant, almost no light on the band, and few people drinking/none drunk (though ETM did have a nice group toast above the drum set before they began).  Clark Phillips still tried to get some things going, including climbing on top of the bar, but he was too tall to stand on the bar (to be fair, he is pretty tall).  Phillips also seemed to have an actual instrument, beyond tambourine &

back-up vocals, some sort of knobs & switches thing in an old suitcase that he had to lean over & away from the crowd to play – a little incongruous to his otherwise über-active self, but actually kind of neat (and nothing Phillips does is exactly ‘by the book’).

Can’t praise ETM much more than I already have (QRO album review – QRO live review), and they still had it, even in the less-than-inviting situation. 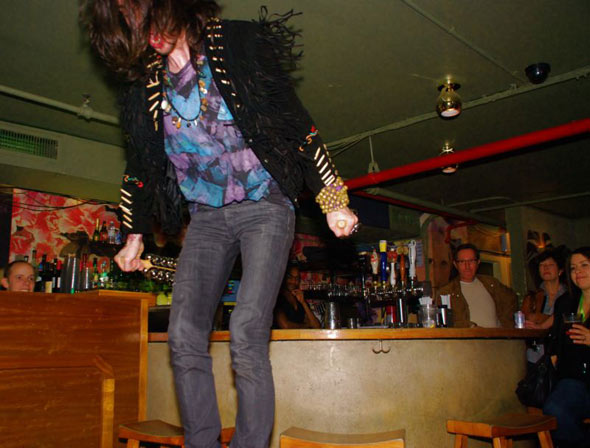 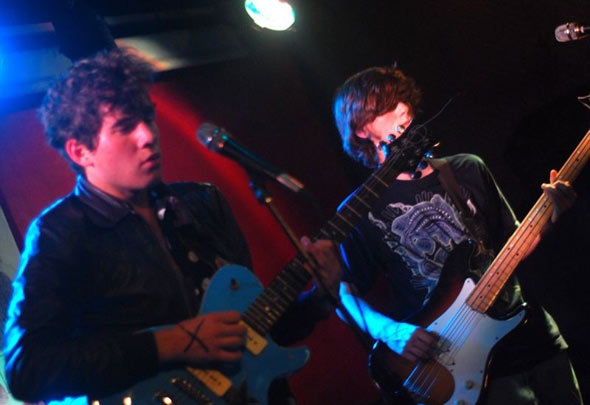 The day party on Day One at Piano’s, both upstairs & downstairs, was held by The Music Slut, which experienced a break-up much-ballyhooed in blogger circles (i.e., no one else gave a damn), with Jennifer Kellas splitting with partner Matthew Gross, who has since gone on to form A Heart Is a Spade.  QRO is firmly in Team Matt, but as he reportedly booked this showcase before the split, didn’t feel too dirty about going to it.

Usually, day parties at Piano’s during CMJ are home to bands doing double-duty, daytime & evening showcases, and are a few years away from hitting it (relatively) big – but ‘big’ has been so scaled down these days in music, and the twenty-four/seven nature of the internet has sped things up so much, that bands can go from day parties one year to ‘big’ next year, such as Surfer Blood (QRO live review), who went from doing CMJ day parties last year (QRO recap) to (co-)headlining the large Webster Hall (QRO venue review) and being the unannounced ‘special guest’ this year.  And Oberhofer was very reminiscent of Surfer Blood circa CMJ 2009, not just in the building heat behind them, but also in sound, a modern/indie take on surf-rock. 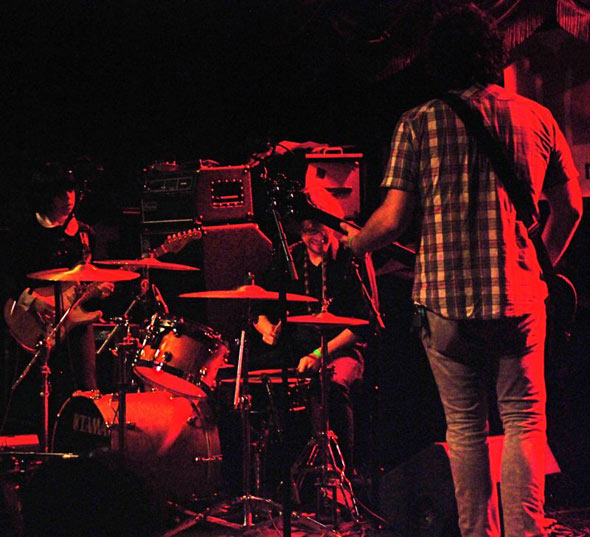 Click here for photos of Screaming Females at 2010 Siren Music Festival on Coney Island in Brooklyn, NY in the QRO Concert Photo Gallery

QRO is a member of the MOG Music Network, which conglomerates music websites and sells the ad space (look to the top-right or top of this or any QRO page), and MOG was putting on a showcase at Brooklyn Bowl (QRO venue review) – for free, but being a member of MOG got your correspondent into the VIP area, i.e. where the bowlers were, but also where MOG was buying pitchers.

Of course, it did take some arguing to get into the VIP area, but no one will out-argue your correspondent when it comes to free beer and/or near-meaningless levels of VIP-ness (in this case, about three steps up from the stage floor).  But that did cost missing pretty much all of Screaming Females – though isn’t every Screaming Females song the same, i.e. about what you’d expect from a band named ‘Screaming Females’: seventies-inspired guitar-wail fronted by a Janis Joplin-inspired/imitating Female? 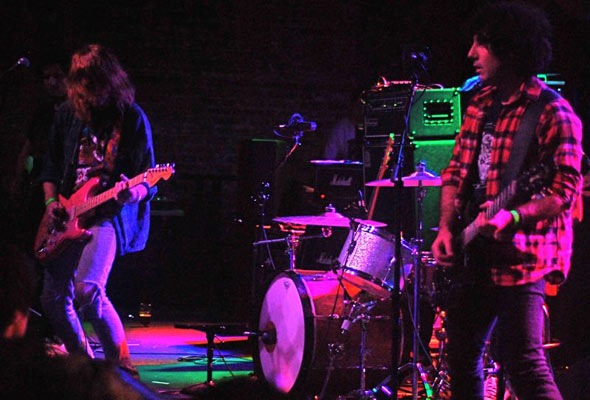 Click here for photos of DOM at 2010 Siren Music Festival on Coney Island in Brooklyn, NY in the QRO Concert Photo Gallery

Click here for photos of DOM at Northside 2010 in Brooklyn, NY in the QRO Concert Photo Gallery

Another hot band this CMJ, even hotter than Oberhofer (see above), had to be DOM.  The Worcester, MA band has blown up even since Northside Music Festival in Brooklyn four months ago (QRO recap), even since The Village Voice‘s Siren Music Festival on Coney Island three months ago (QRO recap).  Back at Siren, DOM played first, at 1:00 PM in the bright sun and seemed to phone it in, thinking they were too good for that time slot – and apparently they were, as they jumped past Screaming Females, who played after them at Siren, but before them on Night One of CMJ.

DOM were also a lot more alive at Brooklyn Bowl, making it a great chance to see them before the grind of CMJ wore them down. 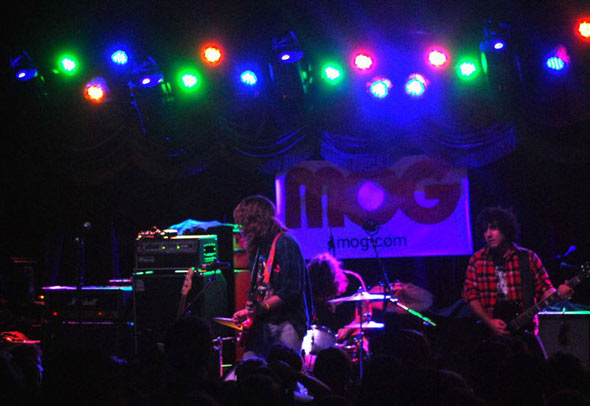 But this was the reason you went to Brooklyn Bowl, waited in the long line for the free show: Yo La Tengo.  The Hoboken band has been around almost as long as the ultra-venerable Sonic Youth (QRO live review), and features their own husband-and-wife pair in Ira Kaplan (vocals/guitar) and Georgia Hubley (drums/vocals), along with bassist/singer James McNew.  While they’ve never broken through to the kind of success of even Sonic Youth (thus the ironic name to their most recent release, Popular Songs – QRO review), Yo La Tengo are certainly a big name in alternative music circles (and their last NYC show was headlining the quite large Roseland Ballroom – QRO venue review).  Often called ‘every music critic’s favorite band’, they were certainly a welcome addition to CMJ. 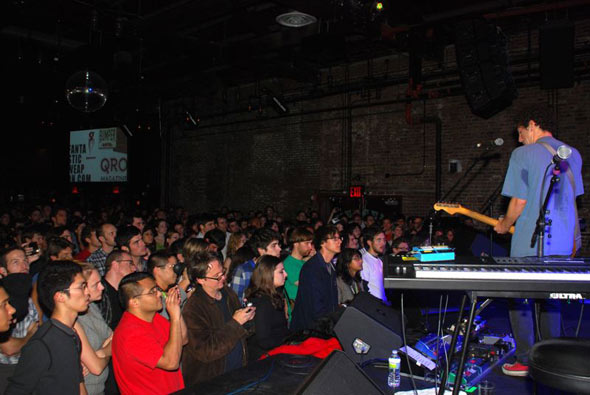 Click here for photos of Yo La Tengo at the last McCarren Park Pool Party in Brooklyn, NY on August 28th, 2008 in the QRO Concert Photo Gallery
More

But it’s kind of unfair to compare young CMJ acts to Yo La Tengo.  Even if you didn’t know all/most/any of the songs (and most people didn’t), you had to be into the performance, from harder songs where Kaplan wailed on guitar to the lighter, catchier tracks like "Mr. Tough" and Popular‘s "Periodically Double or Triple", and definitely encore return classic "Stockholm Syndrome". 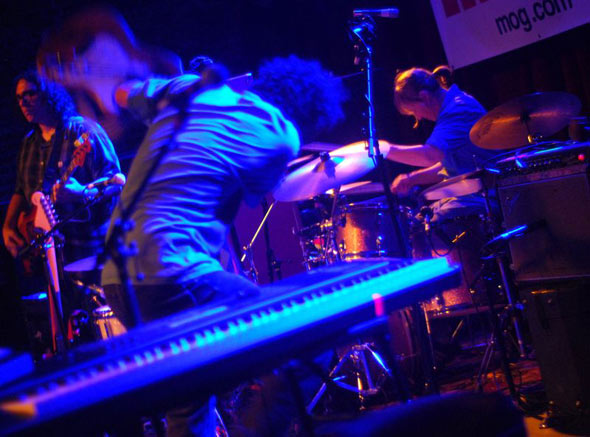 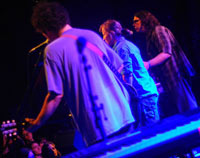 Yo La Tengo also weren’t stand-off-ish artistes, but joked around, such as thanking the crowd – then remembering that they hadn’t finished their song.  And, in the middle of one song, Kaplan put down his guitar, walked over to the side & bowled – unfortunately throwing a gutter ball, but still awesome.

Yes, CMJ is supposed to be about catching new music, and Yo La Tengo are anything but ‘new’.  But screw that, they were also the best band of CMJ. 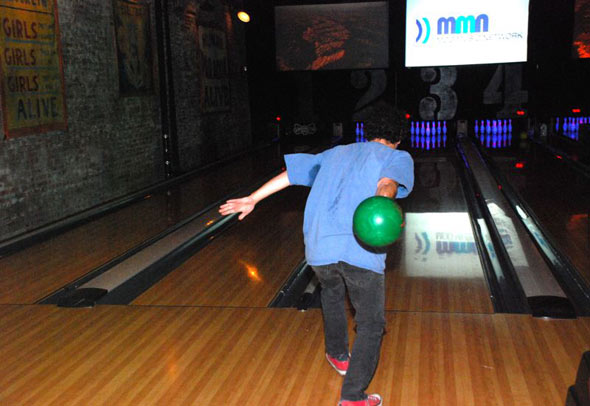 Here’s what two others at QRO caught during CMJ Day One: 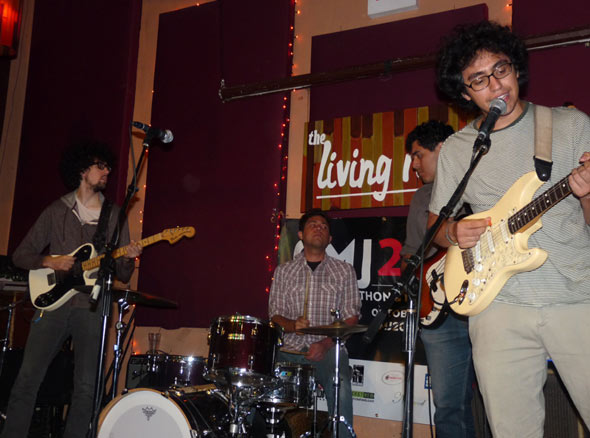 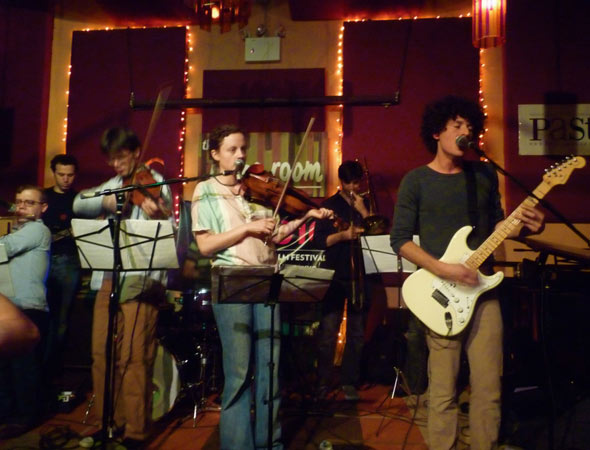 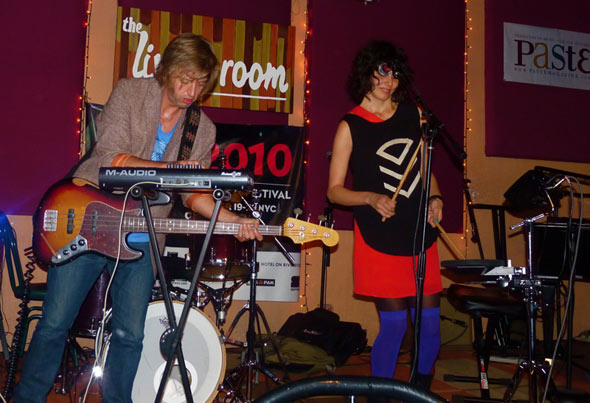 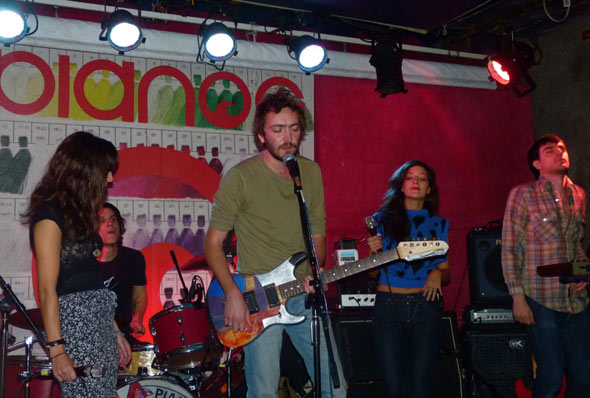 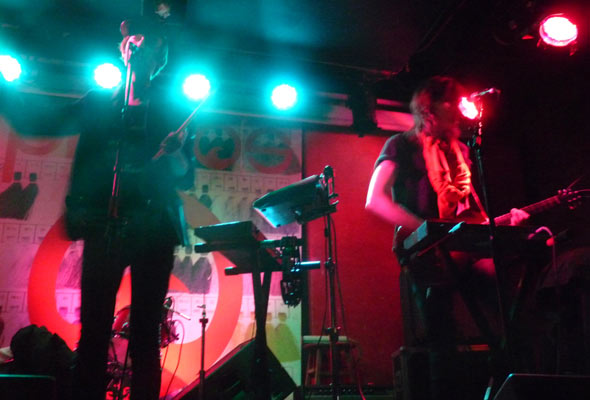 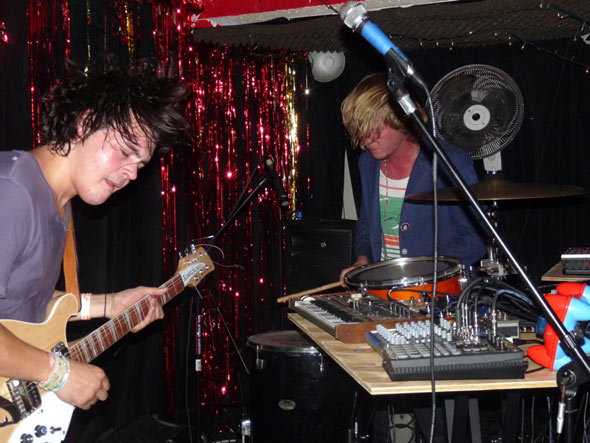 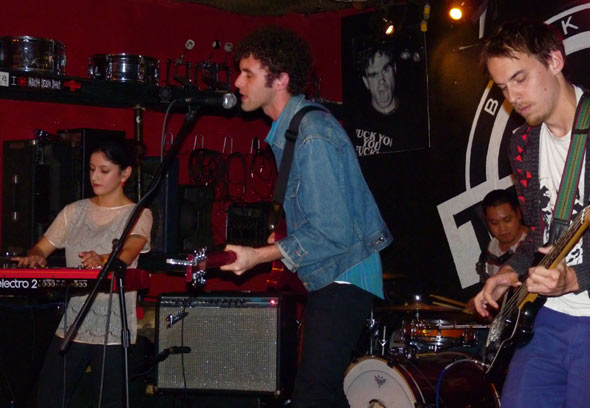 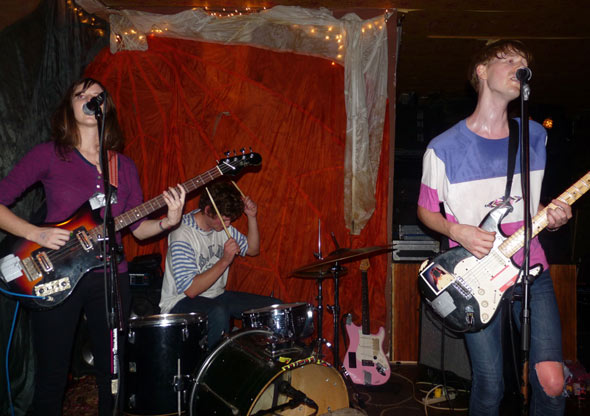 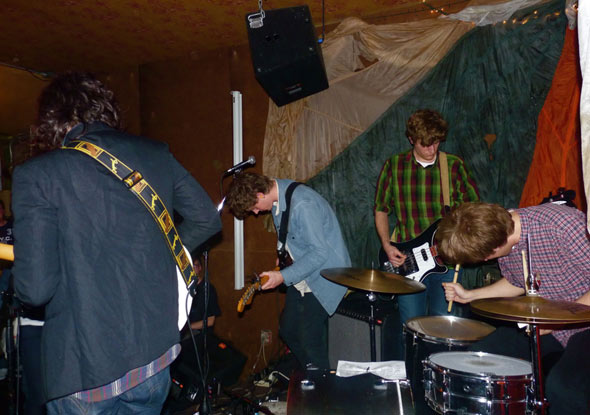 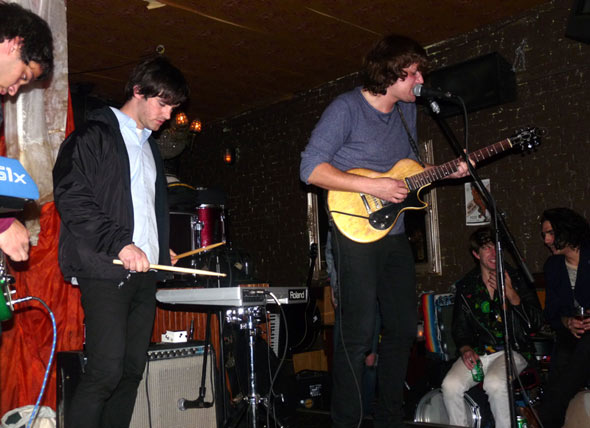 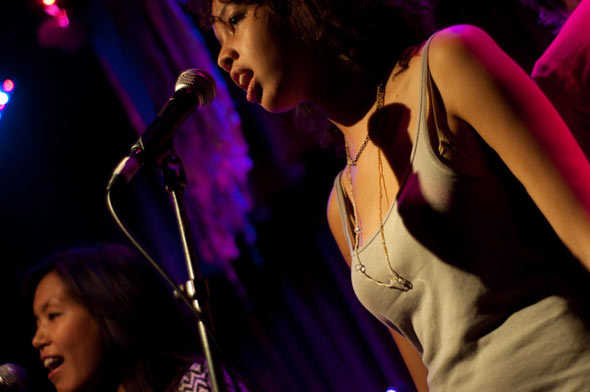 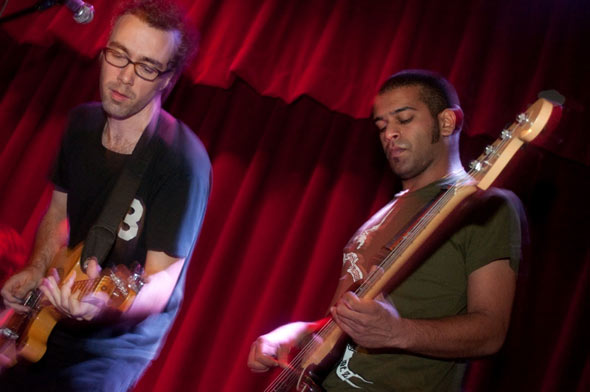