The first day of CMJ is generally the weakest, as many attendees haven’t arrived yet, and who wants to rock on a (non-Mardi Gras) Tuesday?  It’s more about getting your badge, getting your gift bag (which was even less impressive than usual), and figuring out who you’re going to see – though Tuesday is a great day to catch acts that you know you want to see, and/or promised that you’d see, to free up the rest of your CMJ. 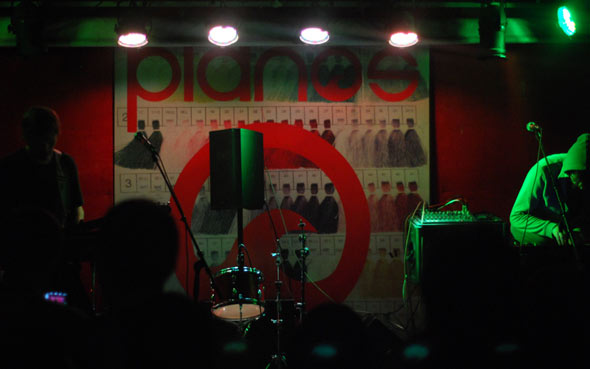 Click here for all of QRO’s coverage of The Forms in the ‘Spotlight On : The Forms’ feature

Long-time ‘Friend of the Q’, The Forms (QRO spotlight on) have had many forms, from four-piece (with twin brothers) to their current two-piece, but seemed to have settled since last CMJ (QRO recap).  Their stage presence still needs some work, but at least singer/keyboardist Alex Tween (QRO interview) & multi-instrumentalist Matt Walsh are both standing up front – and the low-to-nil lighting at Pianos (QRO venue review) didn’t help.  More importantly, their new form is working better musically, as seen on their well-more-than-a-remix Derealization EP (QRO review). 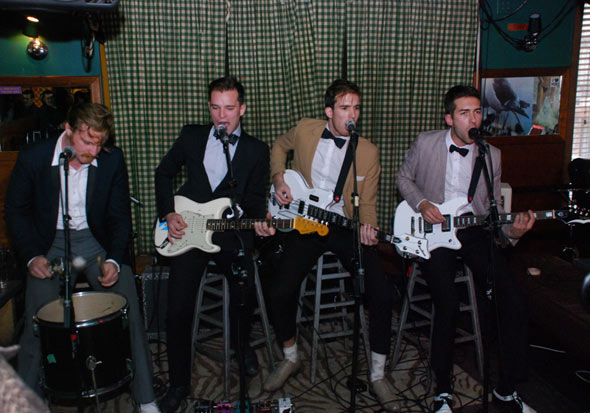 Click here for photos of Locksley at Mercury Lounge in New York, NY on November 19th, 2009 in the QRO Concert Photo Gallery

The band playing upstairs at Pianos was more of a time-killing filler act, as the upstairs is a poor place to watch anyone perform.  Locksley announced that they had just come back from on the road, playing these same songs, "So these are not those songs, but their ghosts."  Between that attitude & the space, the whole thing sounded rather weak – and only the current Doctor Who can pull off wearing a bow tie. 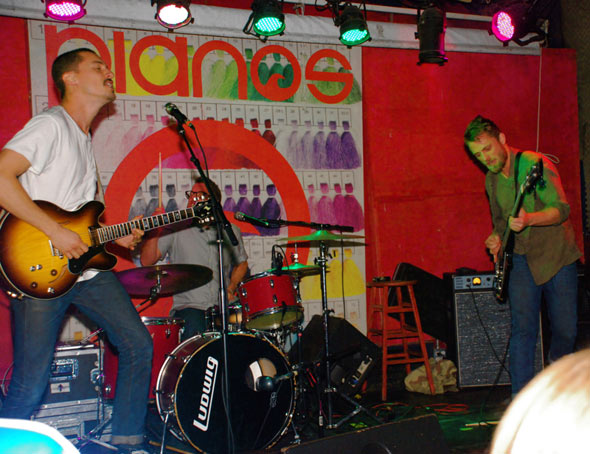 Click here for QRO’s review of We Barbarians at Mercury Lounge in New York, NY on August 31st, 2011

Click here for photos of We Barbarians at Highline Ballroom in New York, NY on May 5th, 2011 in the QRO Concert Photo Gallery

Click here for QRO’s review of We Barbarians at WIRED Store in New York, NY on December 15th, 2010

Bands are limited in time when they play CMJ, especially daytime performance, even if they’re the ostensible ‘headliner’.  But We Barbarians made it work with a short & sweet set, as they were still able to hit up all the songs from their debut EP, Headspace (QRO review).  They had great energy & grit, sounded big despite the small confines and early hour – only need more songs (and maybe a fourth member). 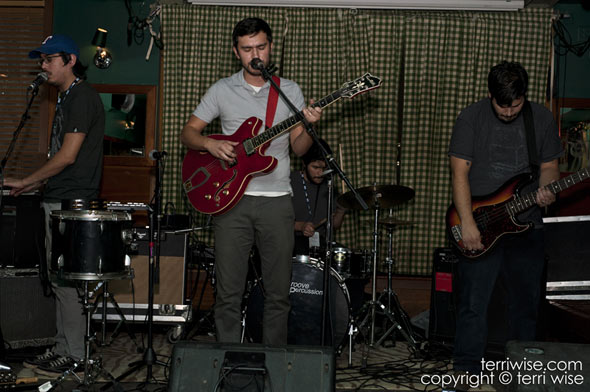 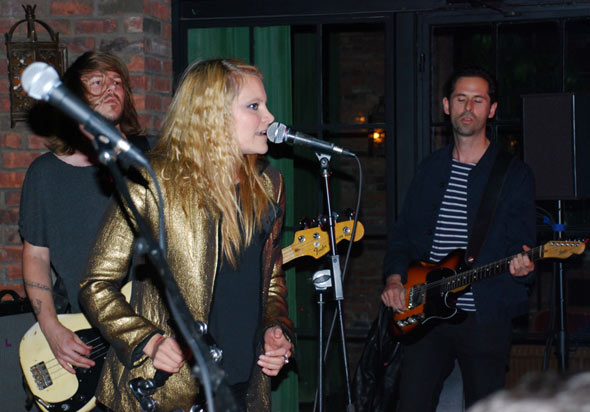 Click here for QRO’s review of The Duke Spirit at Webster Hall in New York, NY on July 30th, 2008

One band I had to see at CMJ 2011 was The Duke Spirit, and unlike other acts, were only playing the first two days, so took the first chance I could to catch the British band.  Unfortunately, that meant waiting in an unmoving line while one person handled all the names, regular RSVPs & VIPs (and waving in the super-VIPs).  Also unfortunately, it meant seeing them upstairs at Bowery Hotel, placed not on a stage (like Ra Ra Riot did when they played an event there – QRO review), but just a foot-high riser right near the stairs leading in & out.  And most unfortunately, it wasn’t an open bar like you had expected, but seven dollars for a beer.

"I don’t know why The Duke Spirit aren’t bigger," one person in line commented, and he was right – English retro-rock with a pretty blonde female singing would seem to be tailor-made for success (the guy in line speculated that it was because people confused them with the came-out-at-the-same-time Delta Spirit – QRO photos).  Can’t really judge them overall from this appearance, thanks to the venue, but still seems like they’ve got a bright future. 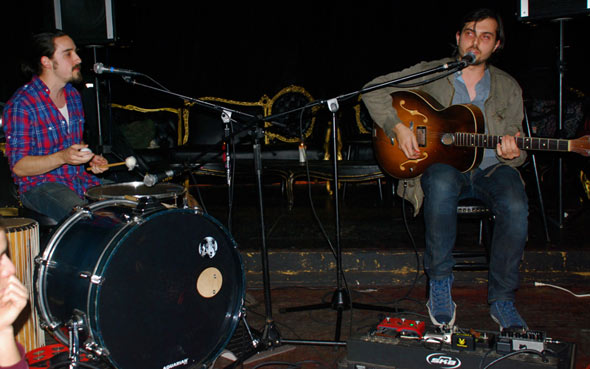 Click here for photos of Courtesy Tier at Bushwick Walkabout at Brooklyn Fireproof in Brooklyn, NY on July 16th, 2011 in the QRO Concert Photo Gallery

A new ‘venue’, White Noise is not the new version of Rehab (QRO venue review), as I was originally misinformed, but an upstairs bar right near Stuyvesant Town (turns out there is a 225 Avenue B), without even a sign at the door (just a hipster in hat on a stool checking his phone, not your ID).  It also has some quite unhelpful bartenders.

All the acts at White Noise had to play stripped-down, seated sets, and this seemed like it would endanger Courtesy Tier, as one of their biggest boons is that the duo sound like a much bigger band.  Yet, while they didn’t sound like their usual four-plus-piece, at least were up to three-piece level.  Most importantly, they rocked the less-than rocking situation, with singer/guitarist Omer Liebovitz delivering as powerful a guitar solo as you will hear from a seated guitarist.

The biggest event on Day One of CMJ was easily at Bowery Ballroom, thanks to booming post-Sleater-Kinney outfit Wild Flag, accompanied by The Fiery Furnaces’ Eleanor Friedberger and locals Hospitality (who recently signed to Merge Records, the same label as Wild Flag & Eleanor Friedberger).  Limited badges were let in, so you had to get there early, and thankfully QRO’s Natalia Blas did: 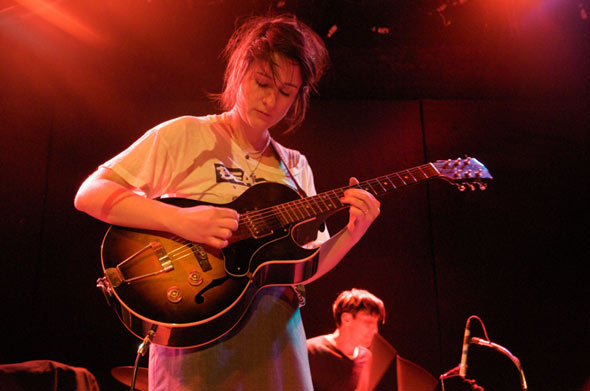 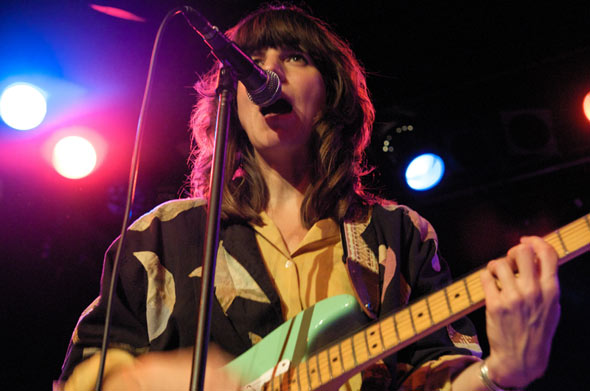 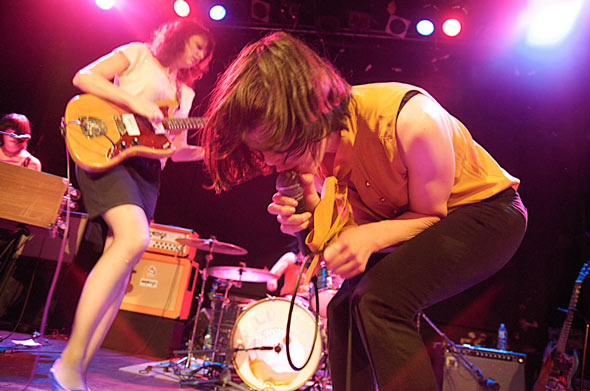 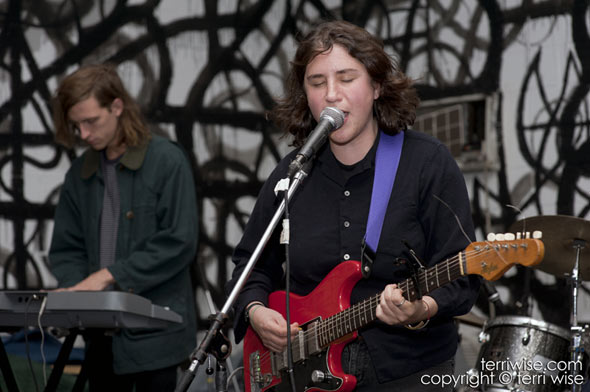 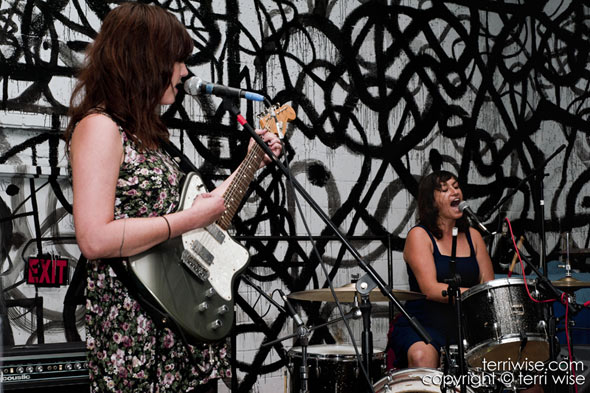 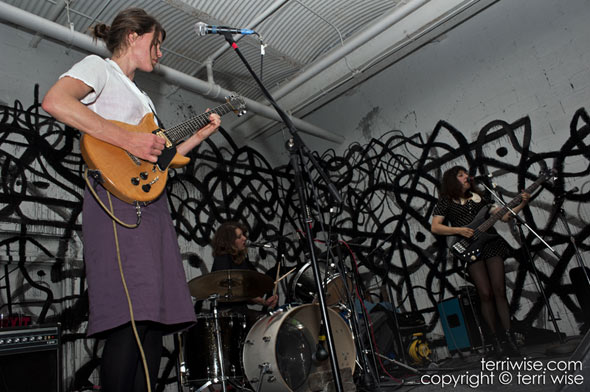 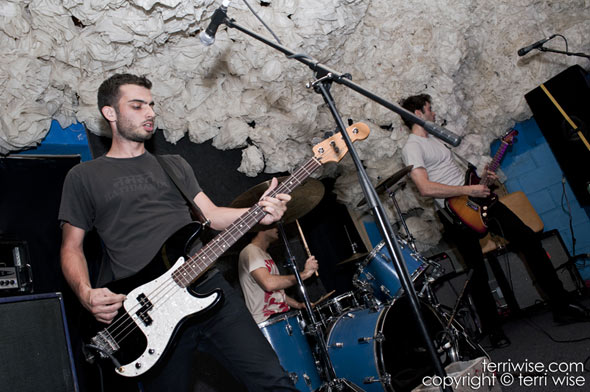 -Zambri (QRO mp3 review) @ Cameo (QRO venue review), 7:30 PM – 8:30 PM.  It feels like it’s been a while since Zambri’s been a stand-alone outfit, and not the ladies helping out Hooray For Earth (QRO spotlight on), so need to see them back on their own.

-My external flash decided to stop working at possibly the worst time, as CMJ is filled with small shows in tiny, poorly lit places.

-When there was a split last year between the two people behind TheMusicSlut.com, QRO sided with the one who went on to found AHeartIsaSpade.com, but have to admit that the remaining Music Slut put on a good showcase to kick off CMJ 2011.

-Sorting names on a list by first name is a bad idea.  People can have nicknames, go by their middle name, etc., but the family name is absolute.  Also just seems low-intelligence, like that the person(s) checking the list can’t handle the concept of a last name.  And you don’t have to be someone whose full first name & nickname are wildly different to think that…