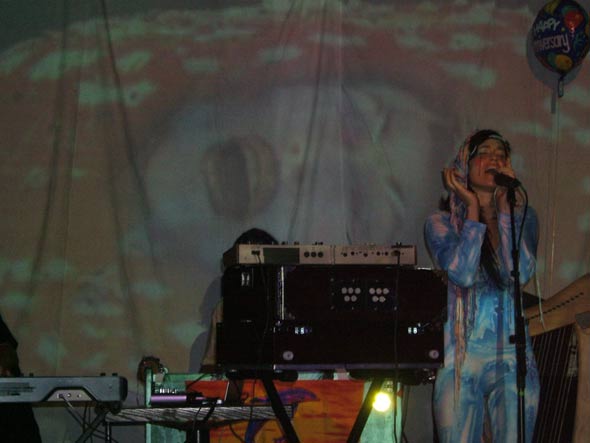 The young girl was standing in front of tiny, bustling Spanish foodie canteen Toro Bravo, next door to the Wonder Ballroom in North Portland where CocoRosie was about to play on Saturday, June 26th, on tour for their brand new album Grey Oceans, on their brand new label Sub Pop.

Not more than five years of age, she was dressed in her special-event dress, a pretty baby blue number that fanned out at the waist in a visual euphony of pleats and patterns.  She could have stepped off the set off of a Shirley Temple musical.  As her father slowly walked her back in the direction of her equally nattily-dressed family members, she dragged her feet, walking half backwards so she could continue to take it all in.  She was wide-eyed and in awe of the strange collection of characters that had congregated down the street.

Anyone in the vicinity would have been hard pressed not to stop and stare, or be any less enthralled with the scene.  The fans in attendance at the Wonder Ballroom love their CocoRosie, and they did make it known.  They were awash in golds and bright reds and yellows and greens.  Faces in queue were painted in an array of floral and animal designs.  There were girls with winding vines crawling up their cheeks.  Boys with faces painted as tigers.  Girls dressed in tattered Peter Pan tights with unicorns sprouting from their heads.  B-boys in crisp, straight-brimmed baseball caps and brightly colored hip-hop gear.  Girls with one side of their heads shaved, standing bare in stark contrast to the spikes jutting out of the opposite hemisphere, painted in gold eye shadow and angular frocks.  It was a Ziggy Stardust concert from 1972.  It was Mardi Gras.  It was a gaggle of extras for Camelot, waiting to slide into back stage for their cue to go onstage for the big finale.  It was as good a show as the show itself.  It set the tone for the night.

The Casady sisters, Bianca (Mom called her "Coco") and Sierra (The one mom called "Rosie") like to bend things.  They like to bend genre.  They like to bend and contort organic, found, and electronic noises into completely new, yet familiar, entities.  They bend voices the way children bend pipe cleaners into horses and lollipop men, with strange corners and day-glo fur.  And not unlike the man who once called himself ‘Ziggy Stardust’ (QRO album review), they – as well as their fans – do like to bend gender.  Rosie playing the part of the ethereal, operatic pixie, Coco the pencil-thin mustached emcee.  With the exception of the mustache, much of this was intact for their live performance.

The band was a crack and motley outfit, anchored by the recently added and brilliantly gifted jazz pianist Gael Rakotondrabe.  Deftly moving between his baby grand piano and a cater-cornered stack of synthesizers, sometimes playing one in each hand, he was seemingly doing the work and recreating the recorded parts of two, sometimes three, players.  Rounding out the crew was an electronic percussionist, and in a move that could have only been berthed in the land of Brooklyn, a beatboxer known as ‘Tez’, who quite literally played the part of the drum machine.  He was able to recreate CocoRosie’s signature scratchy 12-bit hip-hop and break-beats with nothing but a microphone and his mouth, so believably and with such precision that anyone unfamiliar with the band would have to revisit the recordings with an eagle ear to realize that he is not the one making the beats you hear on Grey Oceans or any of the earlier albums.  It’s one of those ideas that sound crazy, but worked flawlessly in performance.  It worked so well in fact, that midway through the set, in a move lifted straight out of the Led Zeppelin playbook, the rest of the band left the stage. Tez remained, moving to the front and center, and proceeded to deliver a drum solo that would have made Bonzo and Biz Markie proud.  The crowd screamed "Moby Dick", drum solo screams, and loved every minute. 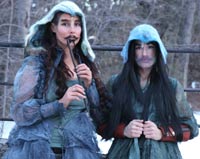 With the stage awash in projected animated images only marginally more Technicolor than the crowd itself, Sierra Casady spun, bounced, and delivered soaring melodies with those classically trained pipes, adorned in little more than a skin-tight sky blue and swirly white cloud-painted jump suit and a red and metalflake blue painted face.  Bianca kept stage right and mostly in the dark for the duration of the set, wearing the same sort of medieval peasant attire both sisters wore for the Grey Oceans album art and promo pics, highlighted by a wonderfully ironic black skirt covered with Iron Maiden logos and art.

Both Casady sisters are rock solid in the live forum, delivering stunning vocal performances and clearly enjoyed the packed and enthusiastic Portland crowd.  There were many interesting juxtapositions between live CocoRosie and recorded CocoRosie.  On record, Bianca Casady’s high-pitched, warbling, melodic rap-singing can, at times come off as vaguely Björk-ish.  The voice coming from live Bianca, however, is something else entirely.  It isn’t at all Icelandic and quirky.  One can hear Indian, Turkish, Israeli, and other things middle eastern in her voice.  The pitch, the angular runs, and vibrato sounds like someone that grew up in Mumbai, watching Sapna Mukherjee movies and listening to Ofra Haza records.  On songs like "Smokey Taboo" off of the new album, when she coos lines like "It’s true / I get depressed in fancy hotel rooms / Undressed / With nothing to flaunt by my loneliness", there’s even shades of Tricky-era Martina Topley-Bird (QRO photos).  The band’s live sound engineer seems to go to great lengths to effect her voice in a manner similar to the megaphone-like filtered tones used for her on record, and quite frankly, she doesn’t need any of it.  It is every bit as remarkable with no effects whatsoever.

Sierra’s role on CocoRosie’s albums will oft-times play the part of an airy, meandering bed to Bianca’s lead, and it works well.  This kind of mix can be a delicate wire to walk when attempting to translate it to a live performance, and their show at the Wonder Ballroom was no exception.  Sierra’s operatic vocal schooling clearly taught her to project to the back of the room, because when she gets in front of a mic, there is no air.  There is a roar.  She sings with such force and volume that she barely needs a mic.  This changes the critical dynamic between her and her sister, and can, at times, diminish the feel of some songs, and the interplay that occurs between them on record.

The echo and reverberation live room acoustics introduce to some songs can change them, and not in a good way.  Songs like "K-Hole", the quiet, introspective, piano driven piece off of Noah’s Ark, came off with an almost new age, hearts-in-space sound.  They can’t be faulted, it is the problem of acoustics, it is the nature of the beast.

All in all these problems are quibbling, and overshadow the performances, the band interplay, and the show as a whole.  It was truly a parade. 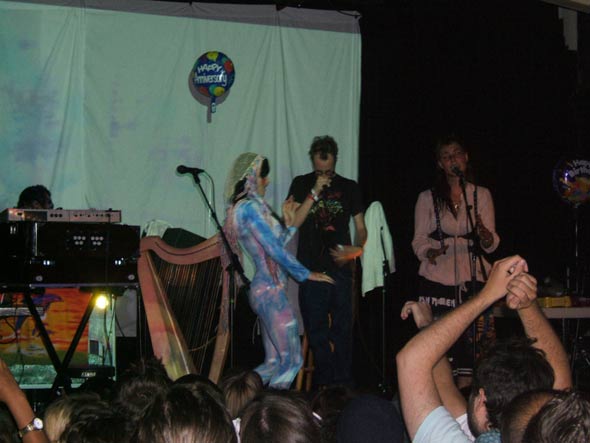 Woven Bones : In and Out and Back Again