'New Age Norms 3' does feel like Cold War Kids have reached the end of this thread, but is still enjoyable.... 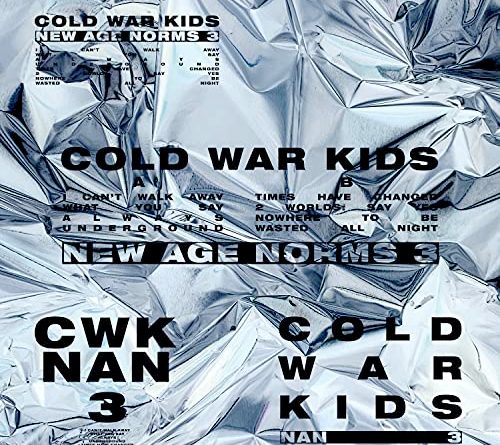 QRO’s review of Cold War Kids at The Vogue in Indianapolis, IN on September 29th, 2013

When a long-running act decides to do the ‘multiple linked EP releases’ thing, it can throw up some warning signs, as, like a double-album, it indicates that they just didn’t know how to separate the wheat from the chaff, giving you filler plus killer (it also brings to mind the dreaded ‘concept album’ concept). But the COVID pandemic hiatus from real life ended up been the best time to do it, and Cold War Kids did it pretty well with their first two-of-three EPs, bringing their indie-soul with 2019’s New Age Norms 1 (QRO review) and going more disco-dark for last year’s New Age Norms 2 (QRO review). New Age Norms 3 does feel like they’ve reached the end of this thread, but is still enjoyable.

One aspect of the first two Ages that worked was keeping them at eight tracks and about thirty minutes each, which let each do what they did without becoming repetitive. Unfortunately, 3 doesn’t have quite that strength to keep it up, as the uplift that goes through it does wear thin a bit. It’s great that singer Nathan Willett is so happy about his love & marriage on “Nowhere To Be”, but it’s a bit much that late on the record (even if it’s just an EP). And the band’s big soul on closer “Wasted All Night” is marred by then adding a second half meander to make it a seven-and-a-half minute piece.

Still, there are good times to be had on New Age Norms 3, like the opener “I Can’t Walk Away” or the funkier following “What You Say”. So, be happy that they’re happy, and hopefully they can bring all their New Age Norms on tour soon.