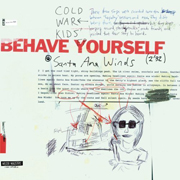 Two LPs and more than a few EPs in, Cold War Kids are still a hit-or-miss band.  Sometimes, their indie-soul-saloon-blues hits it on the nose; other times, it is forgettable at best.  They’ve had a much better batting average with singles, from breakthroughs “We Used To Vacation” and “Hang Me Out To Dry”, on 2006 debut LP Robbers & Cowards, to 2008’s “Something Is Not Right With Me”, a piece far stronger than its miss-more-than-hit full-length, the follow-up Loyalty to Loyalty (QRO review).  So expectations were low, going into ‘left over from the Loyalty sessions’ digital EP Behave Yourself – yet it delivers better than Loyalty.

Behave Yourself starts off with single “Audience”, whose indie-soul rhythm is what Cold War Kids were trying to do on Loyalty.  Too often on that record, stripping things down left the band without the energy that invigorated their singles, but “Audience” does it better.  But best has to be “Sermons”, near the end of the EP (just before closing 38 seconds of jam, “Baby Boy”), a world-wise indie-gospel saloon that beats out anything on Loyalty (even “Something”).  Between the two, “Coffee Spoon” is forgettable, but “Santa Ana Winds” gets bigger and more relaxed.

The expectations for Behave Yourself are far lower than for Loyalty: while Loyalty was the sophomore slump after a breakthrough debut, Behave is the extras from a disappointing record.  Yet even when you take the EP as a Cold War Kids LP without most of the forgettable filler, you’re still left wondering, “Why didn’t they include this on Loyalty?”  Cold War Kids should have, but at least, thankfully, they didn’t forget either.