<img src="https://www.qromag.com/wp-content/uploads/2011/02/coldwarkidsmineisyours.jpg" alt="Cold War Kids : Mine Is Yours" />The juice isn't back on with <i>Mine Is Yours</i><span style="font-style: normal">, but the new record does what better what... 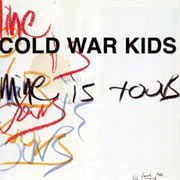 Cold War Kids almost aren’t an alternative music act (and we’re not talking about their reported Christian connections, which seem to be used as a lazy way of dismissing the band by hipsters/Pitchfork).  Singer Nathan Willett has a soul way of singing, albeit indie-soul, and the band steeped in an energetic blues-ish sound.  And even as they’ve moved from that, it’s been towards a post-disco eighties nighttime feel.  Unfortunately, that shift didn’t reward on 2008’s Loyalty to Loyalty (QRO review), their follow-up to breakthrough debut full-length Robbers & Cowards, as Loyalty saw the group lose the electricity that they once brought.  The juice isn’t back on with Mine Is Yours, but the new record does what better what the Cold War Kids are doing now.

Click here for photos of Cold War Kids at SXSW 2013 in Austin, TX in the QRO Concert Photo Gallery

Click here for photos of Cold War Kids at Highline Ballroom in New York, NY on May 5th, 2011 in the QRO Concert Photo Gallery

Click here for photos of Cold War Kids at Koko in London, U.K. on February 23rd, 2011 in the QRO Concert Photo Gallery

Nowhere is that more evident than the title track/opener, a kind of indie-soul anthem that works in the way Loyalty didn’t, and doesn’t need the old Cold War energy.  The rest of Mine doesn’t match that strong start, dipping in the middle, but has its moments.  The slyer indie-soul of “Louder Than Ever” and grander of “Skip the Charades” are both pretty effective, while the brighter build to closer “Flying Upside Down” has some strong lines from Willett.  The newer nighttime-smooth rhythm of pieces like “Finally Begin” and “Out of the Wilderness” don’t match the older Cold War beat on “Sensitive Kid” and “Cold Toes On the Cold Floor” – but the latter is too much just stop/start, while its preceding track, “Broken Open”, does a prog wa-wa groove that actually works.  Maybe there is something to the Kids’ change.

Cold War Kids are a band built on EPs, with three before their first LP and six total, including last year’s Behave Yourself (QRO review), which seemed to bring back the energy that was missing on Loyalty.  Mine Is Yours isn’t a return to whatever the band was on Robbers, but is a better version of whatever they are now.

MP3 Stream: “Mine Is Yours”