What do you do when you’re one of the biggest bands out there today, playing stadiums, yet also derided for being the definition of the tame mainstream?... 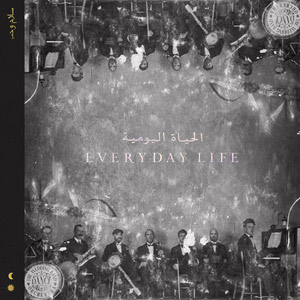 What do you do when you’re one of the biggest bands out there today, playing stadiums, yet also derided for being the definition of the tame mainstream? Everyone already knows Coldplay, already knows what they think about Coldplay. They could release a half-hearted record and it would hit the top of the charts, and get basically the same response from critics as if they’d poured their hearts into it. For Everyday Life, Coldplay try new things, try old things, try other things, for an all-over-the-place album that definitely has some shining moments.

A double-album of Sunrise and Sunset, Everyday tries to reflect today’s world, even as the band undertakes many different styles. There are numerous instrumentals, including six mere seconds-long “Sunrise/Sunset Interlude”s in the middle. There’s a southern choir revival in “BrokEn”, more of an English high-church choir in “When I Need a Friend”. There are multiple acoustic ditties with singer Chris Martin up close to the ear, but also the big, life-affirming pop that Coldplay has mastered in “Orphans”.

And “Orphans” is still the standout on Everyday, the band still best at what they’ve been doing for years. Yes, “Arabesque” is effectively sly and interesting, and while the lyrics to “Guns” might be heavy-handed, the song works as agit-pop. It’s a Coldplay record, so of course there’s woke politics like “Guns” and the recording of police racial profiling in the otherwise subdued “Trouble In Town”. And the record ends in hope with the pop uplift of “Champion of the World” and the title track.

Yes, there are definitely misses to go with the hits, such as too many small acoustic pieces. And yes, Coldplay are still better in their wheelhouse than outside of it. But you have to appreciate the ambition from an act that didn’t need to be.