Albums like Ghost Stories are necessary entries in any band’s overall body of work and it is especially essential to Coldplay’s.... 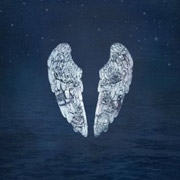 After the release of their last album Mylo Xyloto (QRO review) in 2011, the question loomed of how much bigger Coldplay’s sound could get. There were even hints that Mylo would be their last album. Each of these notions has been addressed with the arrival of their sixth album Ghost Stories.

In a recent interview, lead singer and chief songwriter Chris Martin stated that the new album took – in some ways – over thirty years to make. He is speaking about himself, of course, and who he has become as a person. This revelation is no doubt in light of his recent ‘conscious uncoupling’ with actress Gwyneth Paltrow. After pressing play on the album’s first song, it does not take long to realize that this is the group’s most personal album to date. But Ghost Stories anything but a simple breakup record. Lord knows the world has enough of those. On a deeper level it is a concept album about experiencing the death of a relationship and the full progression of emotions that comes along with it.

The opening song “Always In My Head” expresses the obsession that often comes with a relationship ending – the inability to think about much else and go about day-to-day life. The line, “This, I guess, is to tell you you’re chosen out from the rest,” suggests that clinging feeling that there is still no other person out there for you.

The record hits its darkest moment on the incredible “Midnight” where we get to hear what Chris Martin’s voice sounds like with a vocoder on it (think Bon Iver). It exhibits one of the newest sounds present with this album and represents that moment in the emotional progression where you turn from despair to hope; the moment when you are reeling from the pain and looking for someone to, as Martin puts it, “Leave a light on.”

Perhaps the most touching moment on Ghost Stories is its closing number, “O”. It is simply Chris Martin singing over a delicate piano line. It is where the story arc comes full circle to acceptance. He views love like a flock of birds that always flies, “Sometimes they arrive / Sometimes they are gone,” but no matter what, as the song’s secret track indicates, he will, “Never let go.”

Albums like Ghost Stories are necessary entries in any band’s overall body of work and it is especially essential to Coldplay’s. While each album that they have released has been great, each one kept getting bigger and bigger and you cannot really go many places from there. Except for the EDM-tinged “Sky Full of Stars”, it is a completely stripped down sound and exhibits a bare bones Coldplay. It is a sound that will not appeal to everyone, but that is okay. All great bands have to rebuild from time to time.