Coldplay – Music of the Spheres

Coldplay don’t fail to address their status as one of the biggest, but also most mainstream, acts in the world.... 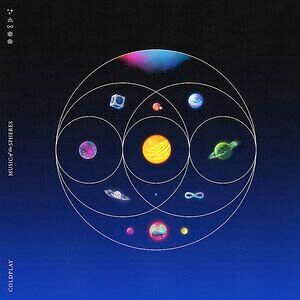 While last year’s Everyday Life (QRO review) was a double-album that included some forays for the group, if was still best in their uplift wheelhouse, Spheres is apparently a concept record based around the music of another solar system, with each song based on one of the orbiting bodies. Or something – one doesn’t really get that just listening to it, beyond a large use of space terms from singer Chris Martin, but Martin also has two songs heavy on “human,” which isn’t very alien. Instead, there is big, hopeful positivity that does ascend skyward on such pieces as “Higher Power”, “Humankind”, “Let Somebody Go”, “My Universe” and more. Oh, and Coldplay don’t skimp on the guest stars, with Selena Gomez for “Somebody”, and none other than quite possibly the biggest act in the world right now, BTS, for “My Universe”. Coldplay do know how to do uplift, better on some tracks (“Higher Power”) and others (the treacly “Somebody”), and combining with BTS basically ensured that “Universe” was going to be a big ‘we are all in this together’ hit.

Spheres does have some divergences, somewhat in a few sub-minute instrumentals, plus a collective press upward instrumental “Infinity Sign”, but it is closer “Coloratura” that clearly stands out. And not just for its ten-plus minute length, but certainly for that as well (balancing with the sub-minute pieces to make the record a normal length in time & tracks). Going epic even for this epic band, “Coloratura” is kind of a summing up of everything Coldplay was trying to do on Music of the Spheres, different pieces put together (reminiscent in that way of Viva La Vida).

Coldplay are always going to be Coldplay, for better or worse. Maybe you can’t stand them; maybe you love them. But they do uplift very well, and we could use more uplift these days.