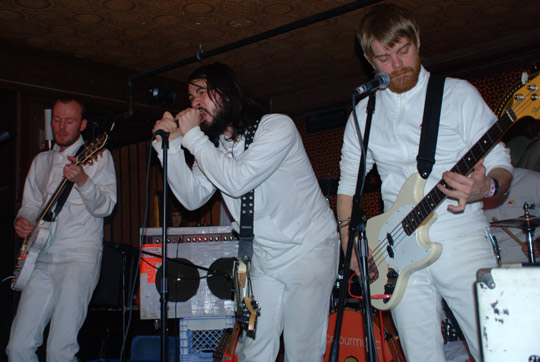 Click here for photos of Colourmusic at SXSW 2011 in Austin, TX in the QRO Concert Photo Gallery

Click here for photos of Colourmusic at 2010 Norman Music Festival in Norman, OK in the QRO Concert Photo Gallery

Click here for photos of Colourmusic at 2008 Fun Fun Fun Fest in Austin, TX in the QRO Concert Photo Gallery

Ever since The Flaming Lips burst out of Oklahoma with one of the greatest, strangest, most electric live shows out there (QRO live review), the Panhandle State has been giving birth to a number of weird, wild acts who put on amazing performances, like Evangelicals (QRO live review) – and Colourmusic.  Touring off of last year’s f, monday, orange, february, venus, lunatic, 1 or 13, the band (which is actually “three-fourths from Oklahoma, one-third from England – wait, that doesn’t work…”) hit Brooklyn’s Union Hall on Wednesday, January 21st for a gay ol’ time.

While f hews more towards the brighter side of sixties psychedelica (QRO review), Colourmusic is really a revelation live – maybe as much like the awesome and strange title of their record as anything in it, though this ain’t a band that plays in lowercase letters.  They start with a Sesame Street-like recording of “Tonight’s show is brought to you by the color orange” (pseudo-taken from their first two EPs, Red and Yellow), and then the four emerge, dressed head-to-tie in white jumpsuits (must get hot & sweaty, especially for the drummer, which is probably why he changed from orange jumpsuit previously worn – QRO photo).

Unfortunately, Colourmusic started with the deck stacked against them a bit.  Playing before them at Union Hall was EMI’s current hyping band, Hockey (QRO photos from that night).  Major label backing has gotten them four shows in a row in New York starting that night, tacked on to other bills, 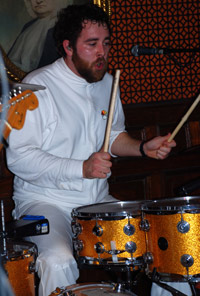 as well as too much press and a ton of equipment.  It meant that Hockey created something of a vacuum when they left, but more significantly, their gear also spilled out of the side-of-the-stage ‘backstage’ at Union Hall’s small, basement-like stage area (QRO venue review) and into the area to the front house-left of the stage, where otherwise concert-goers would stand.  Hockey was still packing up when the color orange brought Colourmusic to the stage, and left much of their stuff down there during the show.  This all left a too-large space between the crowd and Colourmusic when they opened with “Rock and Roll Polar Bear”.  The sixties sheen of that and “The Gospel Song” on f was given more of a seventies, ‘this one goes to eleven’ volume live to open the show, while in between the band’s energy was hyped for “You Can Call Me By My Name” and the new guitar-grind “Jill Jack”.

Colourmusic playing "You Can Call Me By My Name" live at Union Hall in Brooklyn, NY on January 21st, 2009: 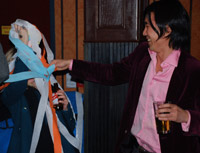 But the crowd was still too removed from the stage, so Colourmusic pulled out their hidden weapon: a bag of streamers – and offered them to the crowd. 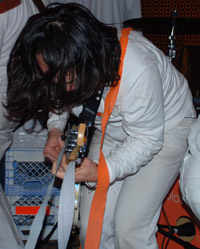 Literally everyone moved to the front to get their hands on some of the colorful rolls of tissue paper, and stayed there for the rest of the set.  There was still a bit of distance between the band and the crowd, but only so that both could properly aim and throw the streamers on Colourmusic’s mark, to start the uplifting “Circles”.  Pretty soon, everything & everyone were covered in color – the crowd, the band, the space in between, the lighting fixtures, you name it.  Fans would drape each other in color, streamers would form knots in between, and the band would play on newly adorned guitars. 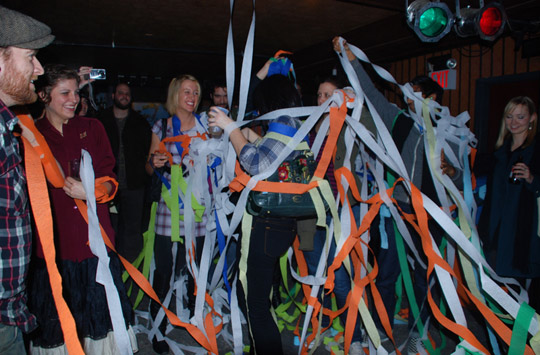 From there, the show became a celebration – a loud celebration.  Colourmusic seemed to draw upon the crowd’s energy for the pressing up-drive “Yes!”, even pulling out an experimental guitar solo.  “Spring Song” was as bright and eventful as May showers, and f’s standout “Put In a Little Gas” stoked the fire hotter with its “petrol fumes” (that line, like the first half of the band’s name, probably came from the Englishman…).  Risking things, the band ended on two unfamiliar, possibly new songs, “Dolphins & Unicorns” and “You For”.  While the disco-shuffle of “Dolphins” was, like that (very short) guitar solo, a little too experimental, “You For” brought not just a stop-start hard attack, but some funk underneath its call to action. 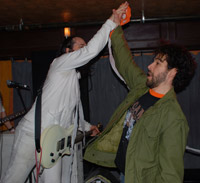 It’s unknown whether the band has ever pulled out streamers before, or will in the future, but it certainly had a lot to recommend itself, as it sort of ‘allowed’ a hipster NYC crowd to have fun and engage with the band.  It got to the point where Colourmusic’s singer joked that he was looking forward to “sleeping with” everyone there from their label, and didn’t 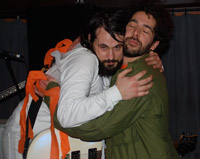 just high-five one super-excited fan, but also got a hug (actually, did both twice – second time on each for the camera…).  Small Union Hall couldn’t provide the color wheel light show that brought the band acclaim when on tour with British Sea Power (QRO spotlight on) – but they brought their own music, and their own Colour.

Colourmusic playing "You For" live at Union Hall in Brooklyn, NY on January 21st, 2009:

The Bird and The Bee : Ray Guns Are Not Just the Future