The good and the bad of alternative music's Americana turn were on display on Independence Day. ... 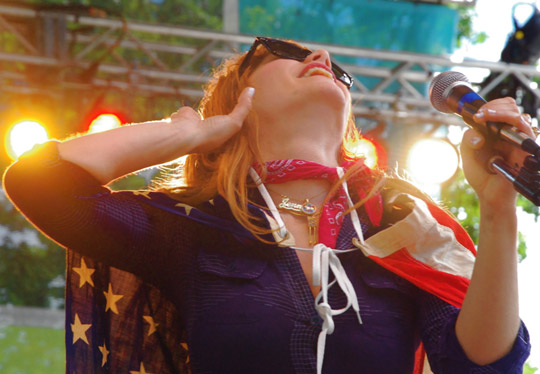 Many expected that protest music would come out of the twin wars begun under the past administration (along with everything else Bush 43 did), and baby-boomers were disappointed that their children did not follow in their footsteps.  But that can really be chocked up to baby-boomer myopia, the most self-regarding generation believing that they set the tone, which all that come later will/must follow exactly.  Instead, just as the left in America in the twenty-first century eschewed the hatred sixties hippies had for soldiers & cops & Christianity, opting nowadays for love & respect, and hatred for those types’ bosses, alternative music looked past the anointed asses at the helm of Middle America to connect with, and draw from, the heartland.  Witness the rise of ‘workingman’s punk’, combining punk rock and a working-class, Bruce Springsteen (QRO live review)-esque ethos not seen since The Clash.  And on the other end of the indie spectrum, musicians have been bringing out stripped, soul bearing alt-folk, as well as straight-up alt-country.  The good & the bad of today’s new alt-country/folk was on display on the most appropriate of days & places, River-to-River Festival’s Fourth of July show at Battery Park (QRO venue review), just south of New York’s Ground Zero, in Conor Oberst & Jenny Lewis. 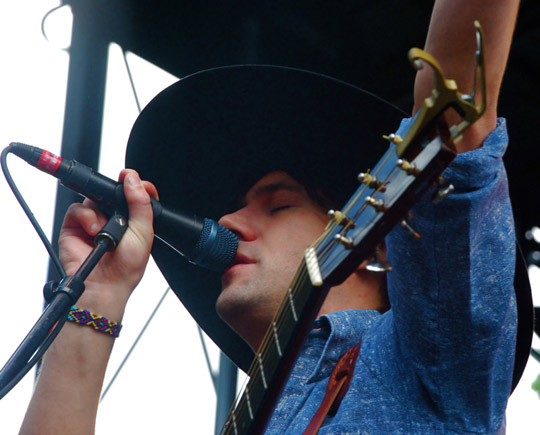 Both Oberst and Lewis started trafficking in much different alt-fame, both in their bands (Oberst’s Bright Eyes, not to mention once being a member of the electroclash Faint – QRO live review – and Lewis’ Rilo Kiley, not to mention guest-vocaling on indietronica smash-hit Postal Service), and in the wider world (Oberst first broke out thanks to Bright Eyes being the favorite act of Seth Cohen on The O.C. – QRO Music of The O.C. – while Lewis was a child actor, including Life With Lucy and Troop Beverly Hills).  But in recent years, as they’ve gone solo (though Lewis is still in Rilo Kiley – QRO photos – and Bright Eyes was always pretty much just Oberst), they’ve moved into alt-country/folk in a serious way, sort of a reverse (in more ways than one) of Garth Brooks-into-Chris Gaines (his short-lived ‘rock identity’, where Brooks sported a goatee like Evil Spock…).  In 2006, Lewis put out her first solo record (albeit with back-up from The Watson Twins – QRO photos), Rabbit Fur Coat, and last year followed that up (now sans Watsons) with Acid Tongue (QRO review).  That same year Oberst put out his own first (officially) solo album, Conor Oberst, and followed it up earlier this year by adding The Mystic Valley Band for Outer South (QRO review).  For both, their first solo records were more stripped alt-folk, while the sophomore releases really went country-rock.  However, they certainly varied in quality, showcasing what’s right and what’s wrong about this new move. 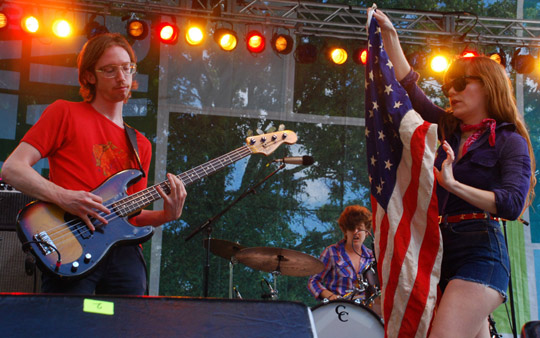 Click here for photos of Jenny Lewis at 2014 Lollapalooza in Chicago, IL in the QRO Concert Photo Gallery

Click here for photos of Jenny Lewis at 2014 Newport Folk Festival in Newport, RI in the QRO Concert Photo Gallery

Click here for photos of Jenny Lewis at 2014 Boston Calling in Boston, MA in the QRO Concert Photo Gallery 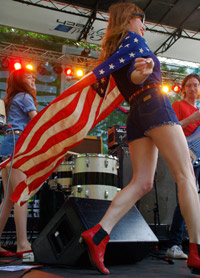 Unfortunately, the better of the two was opening at Battery Park, in Jenny Lewis.  Acid Tongue drew upon a lot of great strains of Americana, and unlike the unmoored newest Rilo Kiley record, Under the Blacklight (QRO review), kept it all together.  Naturally, playing a free, outdoor show on Independence Day, she upped her Americanism (even if it was in… New York City), starting with her entrance: first her whole backing band came on and started, and then her guitarist introduced her as, “The daughter of the Revolution” – with which Lewis came out wearing the Stars & Stripes as a cape (QRO photo), turning around and showing it off to the crowd (QRO photo) before resting it atop a keyboard (QRO photo).  She also had a real ‘country outfit’ to match, denim shirt & shorts with a handkerchief (though her relatively high-on-her-waist belt made the shorts look a bit like ‘mom shorts’ – QRO photo – her younger back-up female vocalist/percussionist/guitarist pulled the look off better, in cut-offs & long gams – QRO photo).  Lewis mixed & matched from AcidRabbit & (QRO set list photo), along with playing Blacklight’s (sole) strong single, “Silver Lining”.  There were some misses – finishing with Rabbit’s too-gospel/folk “Born Secular” was a mistake, and her guitarist joining her for guest vocals on “Carpetbaggers” just couldn’t match Elvis Costello’s contribution on that track on Acid (but who could?  It might not be appropriate to say that a Brit does it better on the Fourth of July, but Mr. Declan MacManus stole his name from two U.S. greats anyhow…) – but overall, Lewis made a strong case for indie going Americana. 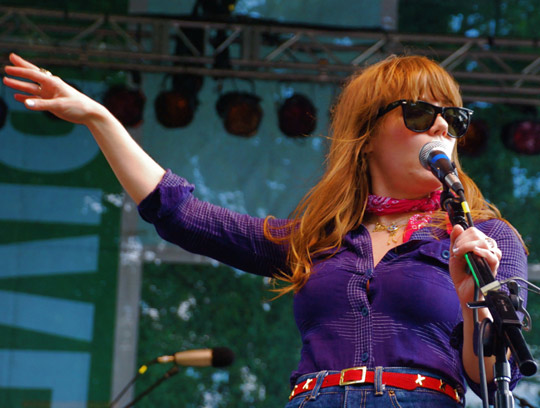 Click here for photos of Conor Oberst at 2014 Newport Folk Festival in Newport, RI in the QRO Concert Photo Gallery

Click here for photos of Conor Oberst at Taft Theatre in Cincinnati, OH on May 27th, 2014 in the QRO Concert Photo Gallery

Click here for photos of Conor Oberst at 2014 Shaky Knees Festival in Atlanta, GA in the QRO Concert Photo Gallery

While Jenny Lewis redeemed herself for Under the Blacklight (guess you can blame it all on ‘that other guy in Rilo Kiley’, singer/guitarist – and fellow ex-child actor – Blake Sennett…), Oberst just further declined with Outer South.  Even when he was in/was Bright Eyes (QRO album review), Oberst was something of a divisive figure: undeniably in possession of a great voice, he often overplayed it, just as he would overplay his lyrics.  When he teamed up with The Mystic Valley Band (note: there are now more people in the ‘Conor Oberst’ act than were in the band Bright Eyes…), he managed to subtract much of that voice, instead adopting a run-of-the-mill country-twang, while upping the lame lyrics & thin depth.  Yet he still has a legion of (mostly young, female) fans, and they turned out in force at Battery Park (though it being a free, all-ages show, the girls looked more Gossip Girl-era than now-cancelled O.C.). 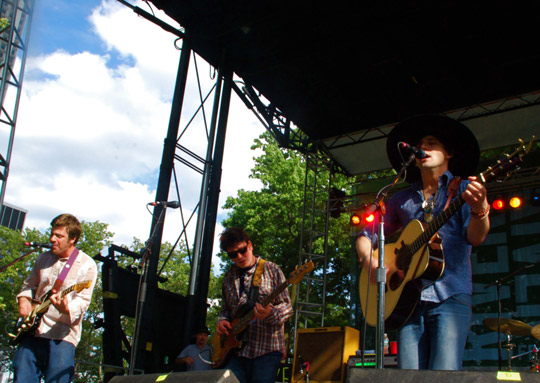 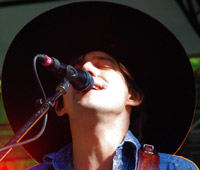 Give this to Mr. Oberst: he does sell his stuff better live.  The country-rock certainly had energy (though with too many ‘raising the guitar while playing & singing, to show it to the crowd’ – QRO photo), as he mixed (like Lewis did) from his two solo releases (surprisingly starting off with three from the earlier Conor Oberst – QRO set list photo).  The live setting also drowned out his voice somewhat, but that was now a blessing, and when he went softer, you could hear hints of the old Bright Eyes voice – though it didn’t work for Outer South’s gospel/folk “Ten Women”, a song “about overcompensating” (kind of like that hat – QRO photo), and sometimes when he would talk between songs, his affected accent sounded outright fake (he’d probably practiced saying his thanks to Jenny Lewis beforehand, to make it sound as ‘country’ as possible).  That vocal drown-out also helped when other members of the band took lead vocals a few times, such as the abysmal-on-record, only-somewhat-annoying-live “Air Mattress”.  Instead, it was the rock ‘n’ roll guitars he was selling best, from apropos starter “NYC – Gone, Gone” to closers “I Don’t Want To Die (In a Hospital)” and “Roosevelt Room”; the final piece, the one outright ‘political’ track on Outer South, really upped its catch live, giving some energy at the end of a too-long set. 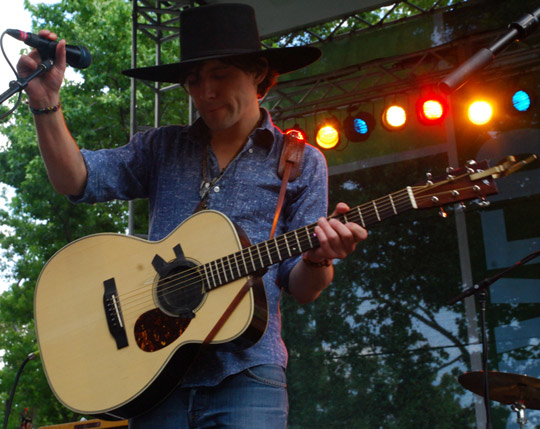 The nadir in this era’s attempts at protest music came when Conor Oberst (then still as Bright Eyes) performed “When the President Talks To God” in 2005 on Tonight Show with Jay Leno (QRO Indie on Late Night TV) – while it did get him banned from Clearchannel radio (what doesn’t?), it’s trite, inane lyrics and over-simplistic delivery (plus Leno outright touting it & him beforehand as the successor to sixties protest songs) were panned by music and political critics alike, from all sides.  But non-events like that or the 2004 ‘Vote For Change Tour’ with Oberst, Neil Young (and the Vietnam-era protest icon had his own Bush Administration lame swing-and-a-miss in “Let’s Impeach The President”), R.E.M. (QRO album review) and others (the tour’s obvious earnestness and delivery was pitch-perfectly mocked, including Oberst himself, on Saturday Night Live’s ‘I Disagree With The President Tour’), along with baby-boomer navel-gazing, obscured the real effects the trials & tribulations of this new millennium have had on alternative music, just as how leftie, Move On knee-jerk fury did for the changes America has experienced as a whole.  How America’s acted since the halcyon, pre-9/11 days, when you biggest worry was over Presidential blowjobs (though we all should have been watching Clinton’s prosecutors – how many weren’t having affairs?…), has been a mixed bag of greatness and shamefulness, from United Flight 93 to Abu Ghraib.  And on the country’s birthday, right near where it all started, people got to see the good & the bad of how alternative America has responded. 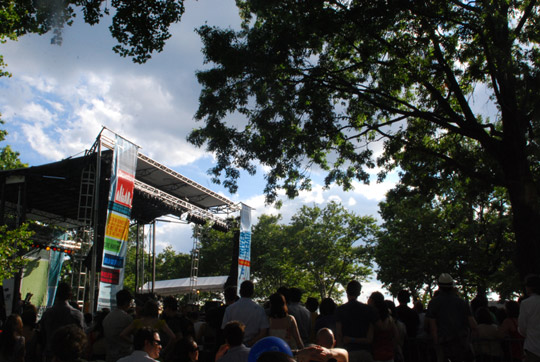