Stirling, Scotland’s Constant Follower has risen with 'Neither Is, Nor Ever Was', their debut full-length.... 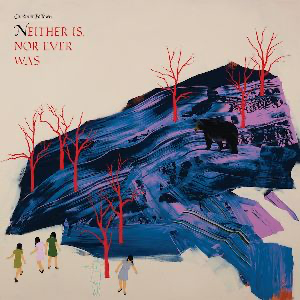 Everyone knows that the human heart is a wild goose chase of Olympic proportions, rife with bit rot, head fakes, and crime capers that frequently leave us apologizing to the spectre. But what of the human head? Over the history of musical art, less has been made of the way the hue and cry of that sadistic soca party we all wear on our shoulders can sneakily thieve the essence of one’s inner creature. Granted, Foreigner gave us “Head Games” and Kylie Minogue’s “Can’t Get You Out of My Head” fulsomely lived up to its name, but these and other popular examples merely couch the head as the highway back to the silly old heart again. We needed someone to write the nod to the noggin that would allow us all to know that our routine mental misgivings and other brain-based buffoonery is as common and shared as what a donut we tend to make of it all. We also needed that person to do it without sounding like they belonged in the Lollipop Guild. Stirling, Scotland’s Constant Follower has risen to this unspoken challenge with the tether to life that is Neither Is, Nor Ever Was, their debut full-length.

There are innumerable impressive aspects to today’s rendition of Stephen McAll, lead vocalist and writer of this charming tartan collective. As early as 2017’s Old Shorelines, it was apparent that here was a band fronted by a man built on a particular mechanosensitivity to change. Perhaps the first of those stunning traits that should be saluted with regard to his current creations as Constant Follower is that McAll’s impetus for these songs has stemmed in large part from a vicious attack he suffered a solid decade ago when he was still a teenager, awaking in a hospital to discover that the resulting head injury had absconded with absolutely all of his childhood memories.

McAll’s attempt to restore order to his own interior has come, to all of our shared benefit, in the form of this unflinching group of pensive, reflective songs – a packet-paean to the passage of time, its muddled meanings, and – perhaps most notably – its sneaky illusions. Neither Is, Nor Ever Was is a wonderland of warring memories to warm the winter.

Featuring Andrew Pankhurst on guitar, Amy Campbell supplying backing vocals and synthesizers, and Kathleen Stosch handling bass, Constant Follower brings the weather on this terrene first offering. McAll is a road-tested guildsman of understated intelligence. He paints the emotional landscapes of his songs in much the same manner that Tyrus Wong painted Christmas cards: spare, honest, classic – and with the same delectable absence of braggadocio.

It is monumentally difficult to write that which is stricken in a palette that is welcoming. McAll and company have accomplished this to enviable effect, and more. Imagine having to reimagine your whole childhood, but having one of the world’s most whimsical real-life storybook backdrops in which to do it. The songs on Neither Is, Nor Ever Was were born in a remote cabin on the west coast of Scotland, snug within an atmosphere as naturally unforgiving (and thus gorgeous) as the undecorated truth always is. Here, in such a pastoral place and across the dust of a decade, McAll has translated the trauma of his barbarous experience into a fraternal game, a final gift, and a formal rescue.

Produced in conjunction with renowned Shimmy-Disc founder, Kramer, each of the tracks appearing on Neither Is, Nor Ever Was possesses a twin short film created by one of Scotland’s current cinematic luminaries. The filmmakers associated with creating the visuals for this project were given no instruction or interference from the band, and thus each video is that filmmaker’s completely personal response to the song in question.

As such, the result is a set of ten short films that stand as viable pieces of original art entirely on their own, and many of which are now up for various prestigious considerations at events such as the Edinburgh International and Manchester Film festivals. Likewise, Constant Follower themselves have recently been nominated in the “Best Acoustic” category for a Scottish Alternative Music Award (SAMA) for Neither Is, Nor Ever Was, and quite deservedly.

The record swoops into its sound like a lapwing, with lead track “I Can’t Wake You” hearkening to “moments lost forever,” with the photo-negative quality extending far past the song’s accompanying video full of nostalgic photographs. This is a song that feels like an inversion of a subconscious memory, a dream-thought turned inside out and hung in the sun to freshen and become wearable again. “The Merry Dancers on TV” showcases guitars that sound like chiming dew and has the feel of serendipitous walks you take down country lanes when you miss the bus in rural places.

“Set Aside Some Time” is so plumose and aerial that one is surprised to find it does not drop feathers on first play. “So save yourself some heart ‘til you need it / You’ll need it” is McAll’s apt advice for the harvest fair of life, and the way we can irresponsibly overlook its most prismatic perfections because they tend to come in humble attire and dwell in the straw. “Spirits in the Roof Tree” announces that, “The yellow months are over,” yet winks in like only underwater gold and dappled sunbeams can do.

The ancient-feeling melody of “Altona” sits sturdily astride stunning feminine howls that sound like wind through enchanted treetops, and all of this while hanging like a grid over elegantly picked acoustic arpeggiations and the single spoken-word refrain, “It’s okay / It’s alright” – the ultimate lush lullaby to healing decompression and primal trust.

“Weave of the World” is a velutinous tune about the tuneless chaos of the world and how only kindness and relentless gentility matter in the face of it. This consequential message is then exemplified fully in the dulcet “Little Marble,” where you can listen out for the wee wails of McAll’s newborn daughter, just audible under the sonographic backing vocals. “Little Marble” is a whispered exhalation of a song, its concept of leaving a marble in one’s shoe in order to think of someone with every taken step beautifully Byronic in its skewbald romanticism. It would be difficult to conjure a better metaphor for what real love of any kind is always like – the sugared sting, the willful bruise.

As its name implies, “What’s Left to Say” softly highlights the unnecessary nature of words where true connection exists, whether that be in the flickering final frames of a fading life, or the episodic efflux of a new one. Being truly is all you ever need be. “Weicha” opens with wordless vocalizations gated in a way adjacent to that of the launch of Tame Impala’s The Slow Rush, but toward a far more ancestral place, and closes the album in a way that makes you think you are already misremembering it – but that this is good, because you can recreate it again, all anew, just by starting it over – much like everything we do as people then? If ever a record more physically embodied its underlying concept, we’ve not heard it.

Constant Follower is Scotland’s mosaic answer to Red House Painters and Iron and Wine, but with an even more powerful preservation of the childlike innocence that forms the bedrock of any true creativity. Every song on this album is full of bright Hebridean zephyrs and works like comfrey and hyssop for whatever still hurts your throat about your own childhood. McAll may have had to rework his relationship to his own youth by dint of grotesque violence, but his manner of going about that task is softer than down. Blowing these tonal tinctures and tisanes into existence with the exquisite care of a glassmaker, he doesn’t need the language of embellishment as the whole exercise of this record is about writing from the clean place, the gossamer grounds, that so many adults don’t remember existed – and with nothing like McAll’s excuse.

In nature, there are chinook winds. Those unseasonably warm and arid winds that topple down the eastern side of the Rocky Mountains and fool the trees into thinking Spring is here. When the trees then suck up the sugars from their roots in preparations for budding out, lurking winter, ever crafty as apples, reemerges and browns the colors before they ever greened. Neither Is, Nor Ever Was is Stephen McAll sharing his hard-earned lessons about how best to weather our own characterful chinook winds – those false feelings, the imagined hurdles, the fear-rooted resistance that tricks us into doubting (and thereby inherently limiting) ourselves – in any day-to-day human life. The brain is a brigand, and Constant Follower’s greatest civility as a band is seen in their insistent encouragement that we face the downward-tilting days with upwardly inflected insights. Time is always going to be a tiefling’s terrain, full of splinter scenes and mandibular mirages where very little can ever be said to be “certain” and quite a lot can unexpectedly chew you up. Setting aside some time for Neither Is, Nor Ever Was to help immediately refashion whatever the roughness has rumpled, however, is a sure thing.