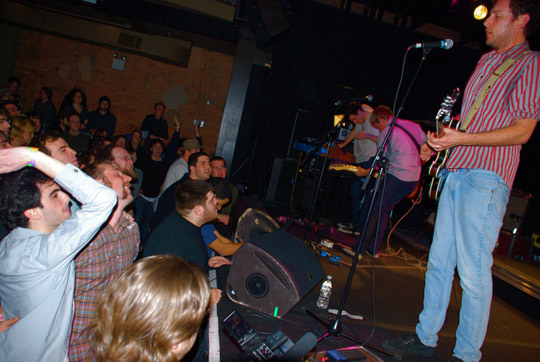 While many of their Canadian/Arts & Crafts peers go for the post-modern, or at least modern, indie rock of the land of universal health care, Sky Needle, multilingualism, and multiculturalism, Constantines draw from the other side of the Great White North: the gritty, working-class, hockey-loving, small town, prairie, tar sands, hardscrabble men and women who settled the cold frontier up there.  Their rock ‘n’ roll is dirty and straightforward, and never more so than when performed live, like at Brooklyn’s Music Hall in Williamsburg (QRO venue review) on Sunday, December 7th.

Click here for photos of Constantines at Southpaw in Brooklyn, NY on April 19th, 2008 in the QRO Concert Photo Gallery

While their last tour was devoted to mostly pieces off of their recent Arts & Crafts debut, Kensington Heights (QRO review), this time the band mixed up near equal amounts from all four of their full-lengths.  However, they still started in Kensington (an area of their hometown, Toronto), “Credit River”; both a riff on tough times and an actual river in Ontario, it was never more apropos than starting a set in the city of Wall Street (maybe someone should have played it before that bailout went through…).  Yet the group, from there, jumped from record to record, and only once in the entire set did they play two or more in a row off the same album.  Constantines drove out of “Credit River” thanks to “Tank Commander (Hung Up in a Warehouse Town)”, from 2003’s Shine a Light, which turned up the grit for “Lizavetta”, from 2005’s Tournament of Hearts. 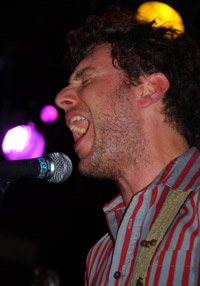 The crowd on a Sunday night December in Brooklyn was composed mostly of Constantines loyalists (plus Britt Daniel of Spoon – QRO live review – !), but new numbers like “Credit River” and Kensington’s first single “Hard Feelings” were still favorites.  Yet the crowd also cheered hard when singer/guitarist Bryan Webb (QRO interview) announced that they were going to play one from their first record (2001’s Constantines), “About being in a band”.  Yet even louder than the response leading into “Little Instruments” was that to the first licks of Shine a Light’s excellent “Nighttime/Anytime (It’s Alright)”.  Maybe no track so fully captures Constantines’ view of the world: dark and tough, but also one in which you can’t give up. 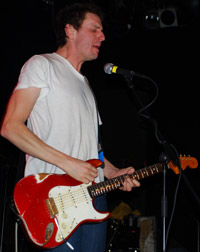 After Tournament’s “Thieves”, the band delivered two Shine/Kensington pairings, first Shine’s driving title track and then the road it was drove down, “Trans Canada” (which has got to be used in some sort of government promotional campaign for visiting Canada’s great, wide, West…), then even more down-to-earth with “Insectivora” and “Shower of Stones”.  But Constantines went into their encore break on not one, not two, but three Constantines tracks in succession, first the ‘juvie’ duo of “Young Offenders” & “Justice”, then just-Senator McCain’s favorite, “Arizona”.  The band came back with Kensington’s sad, epic “Do What You Can Do”, and the whole encore return had a tragic, even alt-country air, pseudo-Wilco (QRO live review), finishing with (fellow Canadian) Neil Young’s “Fuckin’ Up” (curiously, Young plays two dates soon at Madison Square Garden – with Wilco opening…). 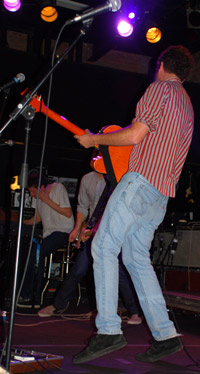 The young men of Constantines all look as non-threatening as any Canadian this side of Alex Trebek – until they start playing, where an inner energy 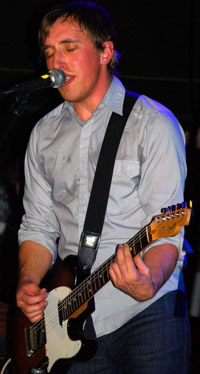 lights them up.  Webb twice played so hard his guitar strap broke (but he didn’t stop playing), while Steve Lumbke & Will Kidman were going nuts whether on guitar or keys (they switched off, though usually Lumbke on guitar – and a couple of times lead vocals – and Kidman on keys), with Kidman, at one point, climbing his keyboard.  Bassist Dallas Wehrle seemed to playing
to the cameras & the fans (there were a pair video cameras at Music Hall, as the band was recording the show – must have gotten some of those sweet, 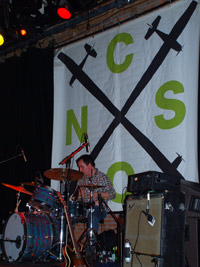 sweet state subsidies to afford the high fees Bowery Presents charges for anyone to shoot video there, which is why all the 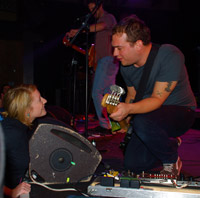 videos here are from their last Brooklyn date, April 19th at the less strictly managed Southpaw – QRO venue review), and behind Doug MacGregor and his drum set was a giant ‘CONS’ flag (though perhaps they shouldn’t have the ‘O’ at the bottom, where it can get blocked out of view by MacGregor).  Constantines are putting the rock back in Canada – and Music Hall… 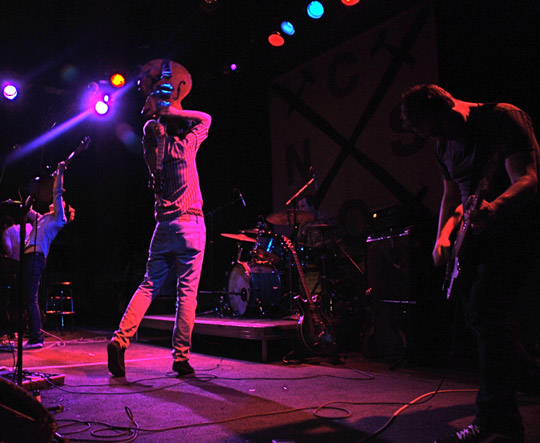