This year edition of Constellations Music and Arts festival took place on Saturday 12th November.  Held at the University’s Student Union in Leeds, UK, the idea is to reproduce the All Tomorrow’s Parties (QRO festival photos) concept of multiple indoors stages all at walking distance so that people can catch as many acts in a day as they possibly can.

In spite of being a festival still in its infancy (this was just its second year) it was once again well organized, from the press campaign to the beautifully appropriate stage design by Xiixii (and the cheap drinks…); the line-up was also carefully chosen, mixing local bands with American acts, and artists that only released an album or two so far with bigger names like headliners Wild Beasts and even ex-Pavement music veteran Stephen Malkmus with his band the Jicks.

This year the main stage was shifted from the Refectory to the huge & welcoming Stylus, which helped to make the journey between stages much easier and gave earlier/less known bands the chance to play in front of a half-full room.  Like in 2010, the other three stages were the village hall style Riley Smith (usually used as a prayer room and for that reason a strictly no alcohol zone), the tunnel shaped Mine (with the best drinks), and the sweaty Pulse. 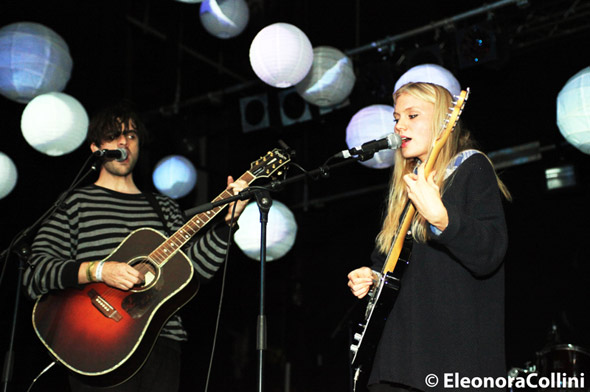 Locals Hookworms and C86-esque Fear of Men kicked off at 2pm, the former at Riley Smith, the latter at Mine. 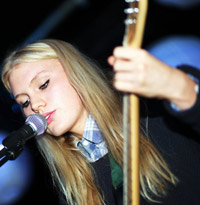 Anglo-American duo Big Deal then played almost all debut album Lights Out on the darkly lit Riley Smith stage.  Compared to their videos where they have a sexier image, they seemed much more casual live; their acoustic/electric guitars, dual vocals and sugary lyrics worked well in an University set, but their songs got a bit repetitive after a while.

Aleksa Palladino and husband Devon Church, a.k.a. Exitmusic, were on next at the Mine.  After at least 15 minutes of grumpy faffing around during the changeover they finally started playing a set of eerie, Lynchian electronica melodies accompanied by husky, ghostly vocals and almost morbid lyrics. 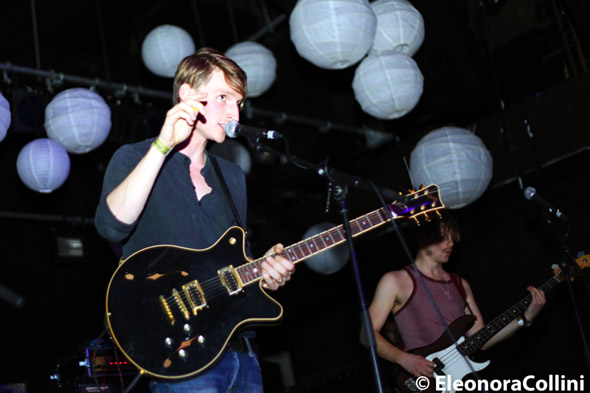 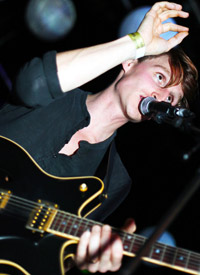 London quintet Zulu Winter, often compared to The Vaccines (QRO album review – they’re also managed by the same team) and Friendly Fires (QRO live review), seemed quite a promising band.  So far they only released the debut single “Never Leave / Let’s Move Back to Front” on Double Denim (same label as Outfit that performed an hour before them at Mine), but they managed to play half an hour set of such catchy songs that we can’t help but impatiently wait for their first album to come out.

Photos of Dutch Uncles at Heaven in London, U.K. on November 9th, 2010

Mancunian Dutch Uncles, known for their atypical time signatures, were the first band of the day at the Stylus.  Frontman Duncan Wallis really gave his best, skipping between piano and crazy dance moves, while crowd seemed to really enjoy some of their tunes, especially “Face In” from their debut self-titled record. 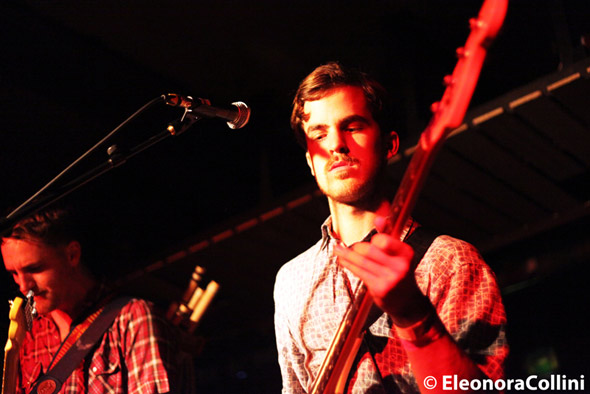 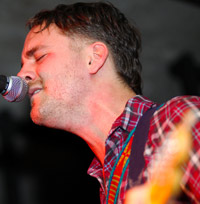 The Mine was running behind schedule so Gardens & Villa ended up playing at the same time as Islet and Summer Camp (see below).  Mixing ‘80s synth pop with ‘90s shoegazing, the Santa Barbara five-piece managed to create their own futurist sound, spiced up by the use of flutes and funky keyboards.  Opening their set with the super catchy “Black Hills”, they performed songs from their eponymous album.  Highlights were “Orange Blossom” with its sensual bass line and singer Chris Lynch’s falsetto, and the galactic “Spacetime”. 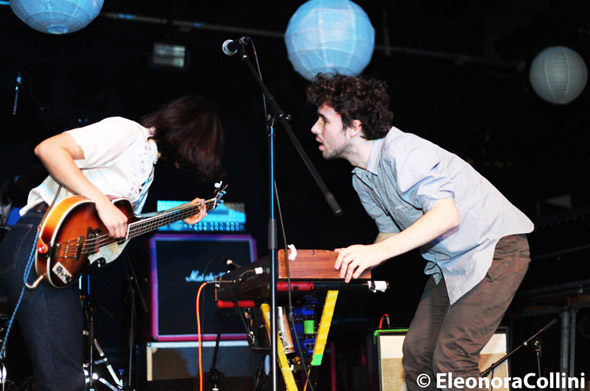 Click here for photos of Islet at 2010 Truck Music Festival in Steventon, U.K. in the QRO Concert Photo Gallery 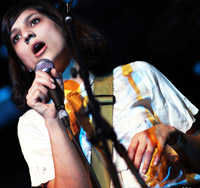 Shame G&V winded up being on at the same time of another great band, Islet, and most people were forced to choose either.  Cardiff-based Islet make experimental, chameleonic post-rock music based on drum-duo breakdowns, splashes of guitar, and rhythmic shouts that hardly falls into any category.  They played songs from their 2010’s EPs Celebrate This Place and Wimmy.  Frontman Mark Thomas constantly switched from literally banging the keyboards to jumping and screaming either from the edge of the stage or directly in the crowd. 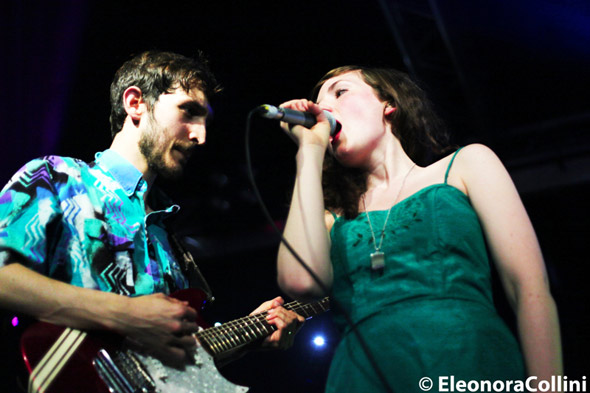 Click here for photos of Summer Camp at 2010 Truck Music Festival in Steventon, U.K. in the QRO Concert Photo Gallery 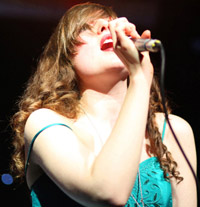 In the meantime, the feel-good indie-pop of Elizabeth Sankey and Jeremy Warmsley a.k.a. Summer Camp, entertained the crowd at main stage Stylus while cult ‘80s films were projected in the background.  Sankey’s voice is no doubt flawless, but can get a bit overpowering and too theatrical at times.  To top it off Sankey and Warmsley (whose Hawaiian outfit totally clashed with the frontgirl’s glamorous dress and hairstyle) kept touching, embracing and smiling at each other in a way that looked more forced than endearing.  The younger crowd seemed to really enjoy their set though, especially Footloose-sounding ‘Better Off Without You” and “Round the Moon”. 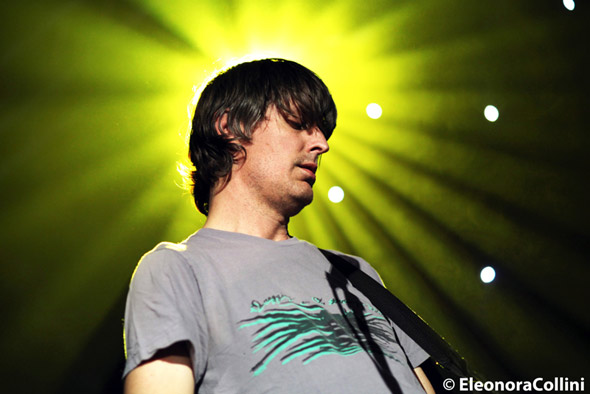 Click here for photos on Stephen Malkmus & The Jicks at the 2007 Langerado Festival in Miami, FL 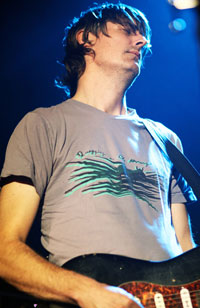 Perhaps the strangest thing in the line-up was Stephen Malkmus & The Jicks.  Being the venue an University Union the crowd was mainly composed by youngsters in their early twenties (though you could spot some people in their forties something, maybe those were the teachers?), so it made sense for the organizers to book relatively young bands with just one or two albums on their CVs.  With his 22-year career in the music industry, Malkmus didn’t really fit in much.  But what was even odder is that they got him to play the 6pm slot (at least they gave him the main stage…).  Still, there were quite a few rabid fans all up front and a few youngsters all going nuts since Malkmus & The Jicks opened with funny “Senator”.  They played quite a few songs from amazing new album Mirror Traffic (QRO review), a new one (called “Planetary Motion”), and towards the end good old fans favourite “Baby C’mon” and the sweet “Church on White”.  They concluded their set with a stunning version of jammy “Real Emotional Trash” (from the album of the same name – QRO review).  Lots of banter as usual: Malkmus dedicated “Stick Figurines in Love” to all the skinny people in the hall, and at some point he threw an unusual shout out for Wakefield (the football team). 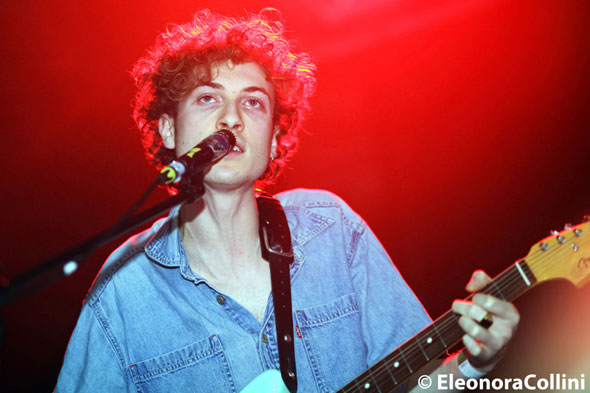 Click here for QRO’s review of Yuck at Doug Fir Lounge in Portland, OR on July 24th, 2011

Funnily enough Yuck, whom critics constantly compare to Malkmus’ old band Pavement (QRO live review), were on next at the Stylus.  Without spending too much time soundchecking they went straight into “Holing Out”, but something didn’t seem right since the beginning: lots of distorted fuzz, a dissonant wall of white noise, inaudible guitars and after trying to make the best of it for a while the band then had to leave the stage.  A few minutes passed without knowing what was going on.  Finally Yuck got back on stage, apologizing and thanking fans for sticking around.  Their show ended up being one of the best of the day (perhaps the best after Malkmus & The Jicks).  There is nothing new in their shoegaze-y rock that seems to borrow so much from bands like Dinosaur Jr. (QRO live review) and Jesus & the Mary Chain, but they have such an energy and they seem so passionate about what they do that you cant help but love songs like the Jay Reatard (QRO photos)-esque “The Wall”, a true gem of punk-pop, or “Operation” which endearingly draws from Sonic Youth’s (QRO live review) “Teenage Riot”. 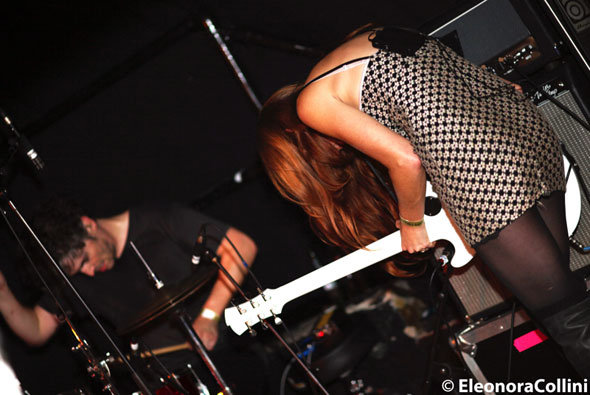 Just a bit afterwards another great show took place at the Mine: Texan three-piece Ringo Deathstarr delighted crowd with their shoegaze-noise rock with a touch of twee pop, playing tunes from this year’s debut album Colour Trip (QRO review) and 2007’s eponymous EP.  They really seem to be set for something big, and the fact that they were chosen to support Smashing Pumpkins (QRO live review) for their November UK tour is just another proof of that. 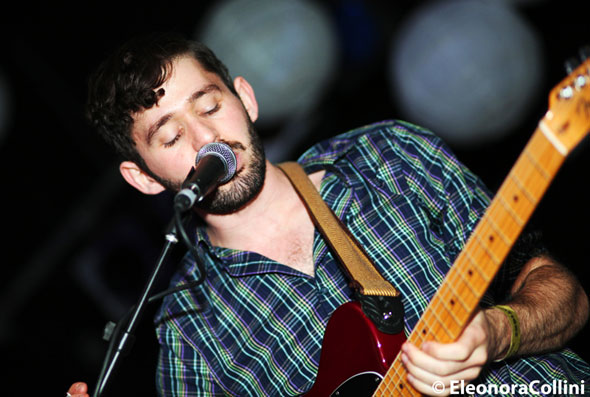 Click here for photos of The Antlers at 2011 Sasquatch! Music Festival in George, WA

Preceded by Leeds instrumental post-rock Vessels, critically acclaimed Brooklyn trio The Antlers were next on the agenda in the Riley Smith Hall.  There is something extremely emotional and touching in Peter Silberman’s voice, and on the notes of the beautiful “I Don’t Want Love” (from new album Burst Apart – QRO review), the crowd stood there motionless enjoying every bit of the song with a chill on their spine. 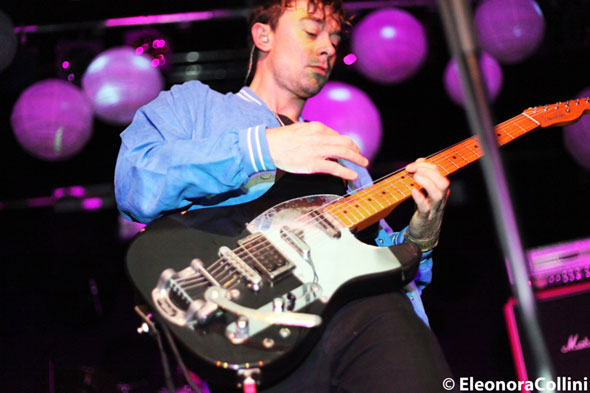 Click here for photos of The Big Pink at Doug Fir Lounge in Portland, OR on March 14th, 2010 in the QRO Concert Photo Gallery

Three Trapped Tigers, the other totally instrumental band on the bill along with Vessels, got the last slot at the Mine, while The Big Pink headlined the Riley Smith, playing to an almost empty room.  The fact that the venue was an alcohol free zone and they were competing with main act Wild Beasts (see below) didn’t do them any favour, but they really tried their best to make it a good show just the same.  New album is scheduled for January 2012 so they played new material including a really promising song called “Superman”. 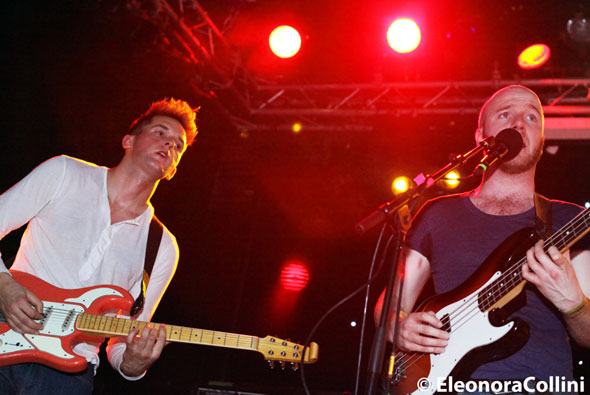 Finally the most anticipated act of the day, Wild Beasts performed at a totally packed Stylus.  They opened with the arpeggiated synths of “Bed of Nails” from new record Smoother (their highest-charting album to date) and carried on with a balanced set list of songs from all three records, pleasing the crowd with their baroque pop.  Co-singer Tom Fleming said he was really honoured to come back to a place where as a student he failed miserably.  Crowd went totally crazy, raising their hands and dancing back and forth to the notes of “Hooting & Howling” (perhaps their biggest hit to date from Mercury Prize-nominated Two Dancers) which concluded the first part of the show, before the Lake District quartet come back to play “Lion’s Share”, “All the King’s Men” and “End Come too soon”, the perfect closer to this small but great music festival.