Nick Cave recently made a stop at the strikingly beautiful and church-like Sanders Theater in Harvard University as part of his ‘Conversations With Nick Cave’ tour.... 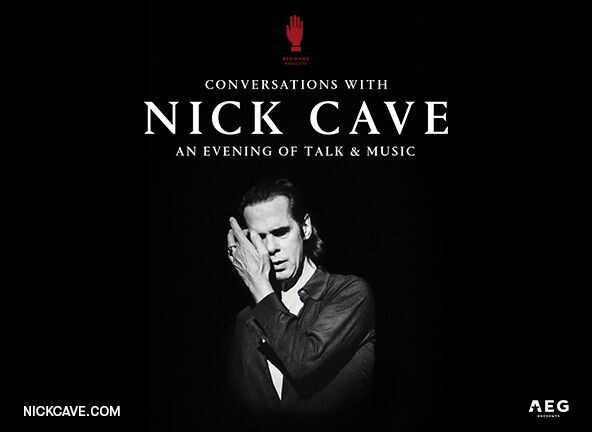 Nick Cave recently made a stop at the strikingly beautiful and church-like Sanders Theater in Harvard University on Wednesday, September 25th as part of his ‘Conversations With Nick Cave’ tour. This unconventional show is essentially an evening of audience questions and solo piano songs. He introduced this format just over a year ago, pledging to answer questions as honestly and responsibly as he could. Opening very punctually at 8pm, Nick sat at the piano to play his soulful 1988 ballad “The Ship Song”. The artist then took to his feet to explain what the three-hour event would most likely become.

In his introduction, Cave mentioned how his new online forum, The Red Hand Files, has emerged as a result of these shows. He said he doesn’t feel qualified to answer some of the questions asked but does his best to tackle those that put him out of his comfort zone. In fact, he prefers answering the things he feels he doesn’t know. Over the course of the evening, he fielded questions on subjects ranging from his naked self-portrait on a tea towel to how he coped with addiction and bereavement.

It was clear from the outset that this event would be on a much more intimate level than the already small 1,000 capacity room was feeling to be. Cave was very careful to highlight the courage it takes take for people to share their experiences and to ask deeply personal questions. In deference to this, he requested that those in attendance please not record due to the delicate nature of some things that may come up. This very interactive process became a learning experience for both the artist and his audience.

What un-folded was a range of very personal observations and some confessions, punctuated by a collection of solo song renditions drawn from across his more than 40-year career. We were also treated to a healthy dose of Cave’s less often-highlighted sharp and self-deprecating sense of humor. The mask of the performer was very much off for the night. Those present found themselves witnessing a humbler and more vulnerable artist than they had been expecting. A man grateful to those who still come to the shows and listen to the records, allowing his work to have greater purpose.

One of the first questions invited him to open-up about his struggles with heroin addiction. Cave humorously offered that the first ten years were far from a struggle because he was enjoying life too much, despite the chaos that it generated. He continued to say that the next ten years spent trying to beat his addiction were horribly dark times for him. A big part of the problem being that he thought he wouldn’t be able to write without the drug. The reality was that he felt he went on to be able to create much more freely and at a higher level in a state of sobriety.

A male attendee in his twenties asked Cave how he felt seeing generations of people at his shows. The musician elaborated that the previous album Skeleton Tree (QRO review) had drawn a lot of younger people to his work, many of whom aren’t familiar with the old stuff and who don’t necessarily clamor to hear him play it. He did remark that it’s very encouraging to him as an artist to know that some people prefer what he’s doing now to his older work. This frees him from feeling trapped by his past.

Before delivering stirring renditions of “The Mercy Seat” and Leonard Cohen’s “Avalanche”, Cave wryly declined to speak about his forthcoming album Ghosteen, joking that he also can’t play anything from it because it’s so awesome that we might not survive it.

We learned that Johnny Cash’s recording of “The Mercy Seat” is his favorite ever interpretation of one of his songs and he considers it a great gift. Watching the Johnny Cash TV show as a child opened him up to the idea that music could be dangerous or even evil, as opposed to mere light entertainment. Other formative influences cited were Nina Simone, seminal Australian punks The Saints and not least, the bard of Montreal, Leonard Cohen. Cave also described how concerts he had seen by Nina Simone, Cohen and The Saints, however fleeting, were moments that live on in him and the experiences fundamentally changed him. He even went as far as to say that his early musical persona was something of a meeting of those three artists.

Cave later recalled receiving a very moving email from Leonard Cohen at the time of the his teenage son’s tragic passing, which simply stated, “I’m with you brother” He said he still clings to the idea that someone he loved who existed beyond him could show such compassion. While navigating such a vast personal loss, he concluded that we do not really have adequate words to say to the bereaved and the best we can do is show compassion. The simple act of Warren Ellis being there to work with him and make cups of tea were singled out as being among the things of greatest solace to him around that time.

As someone who has been listening to Nick Cave’s music for over three decades, it was particularly rewarding to hear some rarely played gems like “Nobody’s Baby Now”, a beautiful new arrangement of Grinderman’s “Palaces of Montezuma” and my personal introduction to his music, the Rowland S Howard penned “Shivers”, by his first band, Boys Next Door.

More light-hearted moments came when he revealed why he really rejected an MTV Award, after sending them a letter stating that he was fundamentally opposed to awards. The actual reason was that he was to share the ‘Man of the Year’ award with George Michael and thought he’d look foolish, while the hosts made a fuss of the more commercial darling Michael. Much more laughter erupted when he shared that, “I fucking hate being called the demented preacher.” Journalists take note!

Further musical highlights came in the form of “Jubilee Street”, “O Children” and “Fifteen Feet of Pure White Snow”, during which he commanded the stage with his signature brand of intensity.

As things drew towards a close, he was asked about his beliefs, and stated that he does not consider himself to be a Christian. “I’m not saying God exists, but I live my life as if God exists. I believe there is something beyond us. If I didn’t, all my songs would collapse.” “Any atheists here? Chances are you’re not songwriters.” “Atheism puts a glass ceiling with what we see as known truths. I’m more interested in meaning than truth.” In the end he said he sees it all as ‘simply a matter of survival’ in his quest to save the soul of the world.

After rounding off the musical content with an encore of “Stagger Lee”, Cave obliged a fan that approached him at the front of the stage to get a signature. This soon became a throng and he patiently signed for, greeted and hugged fans for the best part of another half hour. Eventually he made his way down from the stage to walk along the line to meet his loyal and very satisfied listeners. After all, he had earlier suggested that’s what it’s all about. The relationship between the artist and those who continue to listen to his work over the years. ‘Conversations with Nick Cave’ is becoming his way of giving a generous helping of himself back to those who still want to listen.