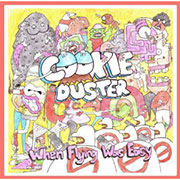 After their last tour (QRO live review) behind Forgiveness Rock Record (QRO review), Broken Social Scene (QRO spotlight on) went on hiatus late last year, and various members of the collective have been doing other things.  Multi-instrumentalist Charles Spearin (QRO interview) has been touring as part of Feist’s band (QRO live review), as well as opening up with his own Happiness Project (QRO review).  Drummer Justin Peroff has teamed up with Dave Hamelin (QRO interview) of the late Stills (QRO spotlight on) as Eight and a Half (QRO live review).  Guitarist Andrew Whiteman (QRO interview) had better be working on a new Apostle of Hustle (QRO spotlight on) record.  And singer/bassist Brendan Canning (QRO interview) has revived his own side-project, Cookie Duster.  Born fifteen years ago when Canada’s By Divine Right and Change of Heart toured together, Cookie Duster only put out one record before the members were busy with other things, but now it’s outlived its originators by coming back with their enjoyable When Flying Was Easy.

While styles are definitely mixed on Flying, there’s certainly an indietronic element at the fore of the record, starting with the relaxed opener “Cut Me, Focus”.  And, despite Canning being the most core member of BSS besides singer/guitarist Kevin Drew, Cookie Duster doesn’t sound like a BSS spin-off.  Instead, it’s more direct and catchy, especially when Canning sings, such as on the fuzzy “Daddy’s Got the Medicine”, echoing “Something Evil Again”, sly & wry “Standing Alongside Gone”, indietronic “Black Car Waiting”, and tech-push “Living On a Fine Line”.  When co-singer Jeen O’Brien steps to the mike (about half-and-half between the two of them, in terms of lead vocals), Flying mostly gets slower – sexier, but not as catchy, save for the big pop catch of single “Two Feet Stand Up”.

Broken Social Scene’s hiatus is not a break-up, but rather that a collective that big has to take time off for the various artists to do their own things (while Drew presumably writes new material).  It’s no surprise that the likes of Do Make Say Think’s Spearin is doing other stuff, but Canning has been integral to BSS since the beginning (and before), and has long played sort of VP/side-man to head BSS honcho Drew.  But that just meant he had to find his own unique way of going his own way, bringing back a long-past side-project from bands that aren’t around anymore.  And for Canning, making music still is So Easy.