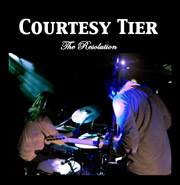 Click here for photos of Courtesy Tier at SXSW 2016 in Austin, TX in the QRO Concert Photo Gallery

Click here for photos of Courtesy Tier at Northside 2014 in Brooklyn, NY in the QRO Concert Photo Gallery

Click here for photos of Courtesy Tier at Bar Matchless in Brooklyn, NY on January 3rd, 2014 in the QRO Concert Photo Gallery

Click here for photos of Courtesy Tier at CMJ 2013 in New York, NY in the QRO Concert Photo Gallery

Click here for photos of Courtesy Tier at 2012 Bushwick Walkabout at Brooklyn Fireproof in Brooklyn, NY in the QRO Concert Photo Gallery

New (or revived) alt-styles come to the fore because they’re new (or rediscovered) ways of feeling good, or ways of feeling bad. The early eighties New Wave sound tapped into the sadness of Reagan/Thatcher-era, while grunge captured the down spirits of Generation X. At the start of this century/millennium, alt-country began to boom, as a new, authentic way to represent melancholy. It’s since largely gone on to straddle into the mainstream (and even actually country music), and the unhappy kids are now looking towards chillwave or post-dubstep or whatever. But Brooklyn’s Courtesy Tier bring an alt-country crush of feelings on The Resolution.

Loss pervades The Resolution, and the closest it comes to ‘upbeat’ is the gallop away from what was lost in “Rescue”.On pieces like “Rescue”, the more expansive opener “Standing Near”, resigned “Alright Mama”, slow-to-big builds “Calling Out” and “Home”, or the evocative & effective “Just Like You”, you can feel the wrenching in singer Omer Liebovitz’s voice, another strain on the well-worn heart.It’s actually somewhat reminiscent of Kings of Leon – when they were great (roughly Because of the Times era – QRO review), before they got quite so huge.

Courtesy Tier do sometimes dip into a grunge-plead on The Resolution, and the record is largely worse for it on numbers like “Preaches”, the harder moments of the otherwise stripped “Morning Run”, or the slow grind guitar-rock “Hey Bee”.  The Tier is actually just a guitar-and-drums two-piece, and while they don’t sound like it, might need a Lou Barlow (QRO album review) before going into Dinosaur Jr. (QRO live review) terrain.

Brooklyn & British kids are already leaving the alt-country behind to the Mumfords (QRO live review) of the world, swinging back towards electronica in the never-ending traditional vs. technological push-pull in music.  But the Courtesy Tier are proving why alt-country speaks to us in these tough times.