<img src="http://www.qromag.com/wp-content/uploads/2010/12/crocodilessleepforever.jpg" alt=" " />Garage buds Crocodiles put some fuzz on it for their sophomore release. ... 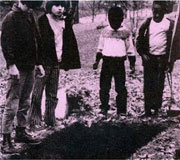 Garage-rock is a much more social style of indie than most of the ‘tortured solo artistes’ of the alternative music world, more ‘just get your friends together in someone’s garage’, so it’s natural that bands would beget other bands among their friends.  San Diego’s Crocodiles first got notice thanks to name-check from SoCal garage-buds No Age (QRO live review), and the two Crocs, Charles Powell & Brandon Welchez, played in an early incarnation of current garage favorite The Dum Dum Girls – indeed, Welchez is married to front Dum Dum, Dee Dee Penny.  Last year’s debut Summer of Hate felt a bit like the ‘band of friends of a band you like’, relatively uninventive and similar-sounding, but with follow-up Sleep Forever, Crocodiles borrow from others to put some fuzz on it.

If Summer of Hate sounded like a No Age retread, Sleep Forever feels like No Age-meets-Deerhunter (QRO live review), the acclaimed Atlanta/Brooklyn act who’ve done more to popularize atmospheric fuzz in the past few years than anybody.  The fuzz often feels just laid atop relatively simple garage, such as on “Billy Speed” or “Stoned To Death”, but it does work – though less so when Crocodiles venture into strictly one style or the other, as the garage-procession of “Hollow Hollow Eyes” is rather run-of-the-mill, while the sad synth-wash of the following “Girl In Black” is just a poor man’s Deerhunter.  Yet Crocodiles are able to do their best on Sleep not just when they go bigger and bolder – see the title track – but also stripped to a synth-procession on closer “All My Hate and My Hexes Are For You”, which is the most interesting track on the record.

Garage + wash are not such strange bedfellows, and neither are No Age + Deerhunter, as the two acts formed the other two legs of the tripod that was Dan Deacon’s ‘Round Robin’ tour in 2008 (QRO review).  Whether or not Crocodiles is friends with the East Coasters or any other atmospheric act, they’ve improved by being their own band on Sleep Forever.

MP3 Stream: “All My Hate and My Hexes Are For Your”

{audio}/mp3/files/Crocodiles – All My Hate and My Hexes Are For You.mp3{/audio}
Tags
Crocodiles
Categories
Album Reviews
OLDER ARTICLE

We Are Scientists : Live on New Year’s Eve