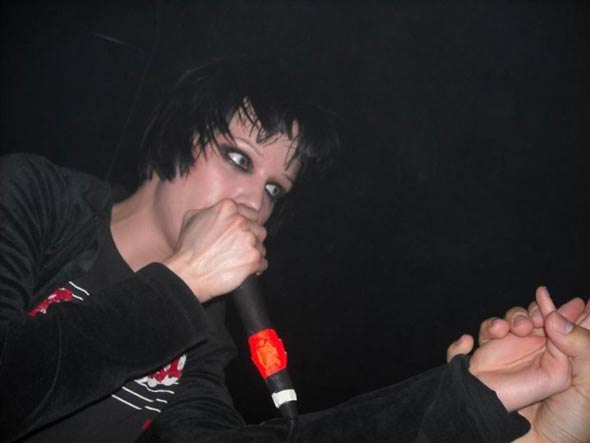 Click here for photos of Crystal Castles at 2017 Lollapalooza in Chicago, IL in the QRO Concert Photo Gallery

Click here for photos of Crystal Castles at 2017 ID10T Fest in Mountain View, CA in the QRO Concert Photo Gallery

Click here for photos of Crystal Castles at 2013 Governors Ball in New York, NY in the QRO Concert Photo Gallery

Click here for photos of Crystal Castles at 2012 Camp Bisco in Mariaville, NY in the QRO Concert Photo Gallery

The Crystal Castles played to a packed crowd in Los Angeles on a Monday night, April 12th.  A line of eager fans stood outside the Echoplex, hoping to get into the sold out show.  All of those lucky enough to be there got a preview of the newest Crystal Castles self-titled album, set for release in the U.S. on June 8th.

The audience cheered as the duo appeared in front of them wearing black hoodies, a staple of their tour wardrobes.  Lead singer Alice Glass was sporting her signature black bob and eye makeup along with a loose-fitting black t-shirt and grey pencil skirt.  Glass is known for getting up close and personal with the audience, and this show was no exception.  She walked off the stage into a sea of hands and was carried by her adoring fans.  Producer Ethan Kath effortlessly manned a futuristic set of knobs and switches, which appeared far more complex than any traditional band instrument.  A guest drummer provided additional beats.  He didn’t seem to mind when Glass stationed herself on top of his kick drum for a better view.  The back of the stage was lined with colorful pulsing light bars, which echoed the electronic core of the Crystal Castles sound. 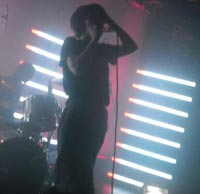 The energy was high from start to finish, from both the band and the crowd.  The audience erupted in excitement when their favorite songs from the band’s previous album, Untrust Us, began.  Conversely, they listened to the new tracks with a sense of awe.  One of the highlights of the evening was an extended version of “Crimewave (Crystal Castles vs. HEALTH)”, made even more memorable by an earlier performance from the L.A.-based noise-rock band HEALTH. 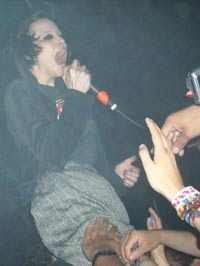 The Crystal Castles live sound was remarkably close to their album.  Their unique mix of experimental electronica, noise, and videogame riffs is not for the faint of heart.  At times it was a challenge to determine what sound was coming from where, but there was no time to reflect on what had already happened; this show was meant to be experienced in the moment.  The Echoplex shook from the shear volume of the music.  Sharp static distortion filled the space.  The band’s sound wasn’t just heard; it was absorbed.  The set was lightening fast.  Banter was almost non-existent and there was barely enough time for Glass to catch her breath before a rousing encore.  Crystal Castles succeeded at leaving their audience satisfied, but still wanting more. 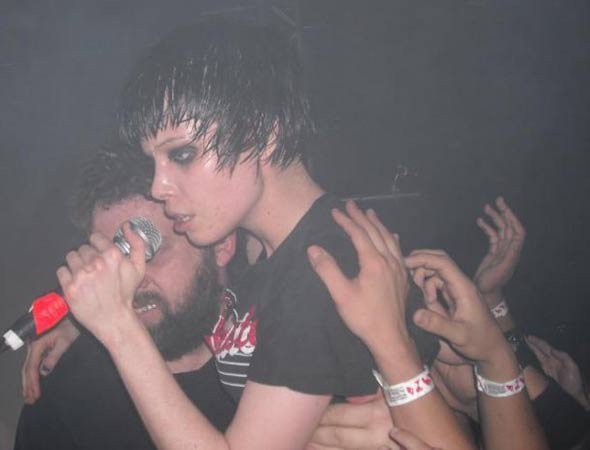