Cults manage to bring popular girl-group sounds into the modern era, without being a retread... 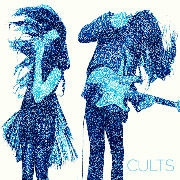 Photos of Cults at 2013 Boston Calling in Boston, MA

Photos of Cults at 2012 All Tomorrow’s Parties in Minehead, U.K.

Photos of Cults at Museum of Contemporary Art in Los Angeles, CA on August 24th, 2012

Photos of Cults at 2012 Governors Ball in New York, NY

Photos of Cults at 2011 All Tomorrow’s Parties in Minehead, U.K.

Photos of Cults at 2011 POPPED! Festival in Philadelphia, PA

A few years ago, Cults broke out from nowhere with a self-titled debut (QRO review) that managed to bring popular girl-group sounds into the modern era, without being a retread.  All eyes have been on the follow-up, and Static manages to continue that trend fairly well – if again not revelatory, an improvement in skill to go with the clear enjoyment.

Photos of Cults at 2011 Primavera Sound Festival in Barcelona, Spain

Photos of Cults at Music Hall of Williamsburg in Brooklyn, NY on April 28th, 2011

Photos of Cults at Empty Bottle in Chicago, IL on April 7th, 2011

There are still obvious girl-group moments to the new album, but they’re relegated to minute-plus pieces “I Know” and “TV Dream” – the real heart of Static is in the darker, more ambitious numbers in the middle.  The best of these is probably “High Road”, which doesn’t feel like a throwback to anywhere or -when, but there’s also the darker disco to the following “Were Before” and “So Far”.  Adding disco is old hat now (it was old hat even before Arcade Fire did it on Reflektor – QRO review), but Cults don’t let it overwhelm.  However, pieces in between the ‘old’ and ‘new’ Cults, like “Keep Your Head Up”, are less significant.

Cults are still a band that’s more on the enjoyment side than the impressive with Static, but they’ve managed to at least close the gap – and in a positive way.