Cursive have long been an acquired taste.... 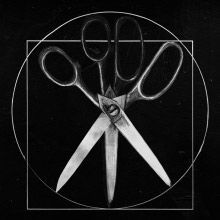 Cursive have long been an acquired taste. The Omaha outfit fronted by Tim Kasher is somewhere between hard rock, math rock, and indie rock, yet not exactly any of those. They have ambitions that have worked, like 2009’s Mama, I’m Swollen (QRO review), and those that have not, such as 2012’s I Am Gemini (QRO review). Get Fixed, the companion to last year’s Vitriola (QRO review), is anything but immediately accessible, but, like the band as a whole, rewards after further listens.

The hard intro “Vultures” lets the listener know what they’re getting into, but it is later pieces where the Fixed shines. “Horror Is a Human Being” is big, angry, and effective, and pairs well with the following take on the dying hometown “Black Hole Town”. Kasher’s anger is off-putting at first, but then really works its way in on “Look What’s Become of Us” and “Content Conman”. However, there are still not as memorable numbers, and the back-to-back Cursive staccato of “I Am Goddamn” and “Stranded Satellite” don’t work as well.

After the long post-Gemini break, Vitriola reminded folks about Cursive, but Get Fixed gets deeper, in both the group’s rough edges and solid core.