Nebraska’s Cursive have long occupied a rather unusual spot, somewhere between indie, hardcore, and even math-rock.... 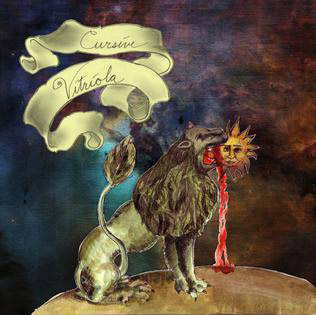 Nebraska’s Cursive have long occupied a rather unusual spot, somewhere between indie, hardcore, and even math-rock. That has made them something of a ‘cult’ band, with a loyal following, and in 2012 did the ultimate ‘cult band’ thing, a concept album, the poor I Am Gemini (QRO review). Thankfully the band plays it more straightforward, if angry, with Vitriola.

From the aggressive stop-start of opener “Free To Be Or Not To Be You And Me” to the extended dark finish “Noble Soldier / Dystopian Lament”, Vitriola is a crashing, near-apocalyptic record. Indeed, “Picking Up the Pieces” is truly ‘end is nigh,’ while “Ouroboros” see the world’s rise/fall/repeat as a full circle. Interestingly, the more ‘concept’ songs like “Ouroboros” and anti-immortality “Everending” are the more memorable and compelling pieces on the album, showing that the band can do ‘concept.’

While not quite matching 2009’s Mama, I’m Swollen (QRO review), as the new record perhaps leans too hard on the relentless, Vitriola presses forward.