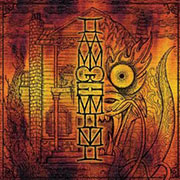 Omaha’s Cursive are already an accomplished band, even if they remain a bit of an enigma, and have never broken into the mainstream (hailing from Nebraska doesn’t help…).  They have earned enough bona fides to go on something of a detour.  However, I Am Gemini indulges in two overdone avenues, ‘concept album’ and stop/start arrhythmia, for a disappointing follow-up to 2009’s strong Mama, I’m Swollen (QRO review).

Click here for photos of Cursive at Culture Shock Festival at SUNY Purchase on April 19th, 2008 in the QRO Concert Photo Gallery

Click here for photos of Cursive at Siren Music Festival on Coney Island on July 21st, 2007 in the QRO Concert Photo Gallery

I Am Gemini tells the tale of twin brothers Cassius and Pollock, one good, one evil – a rote concept that’s been used from the actual Greek myth of Gemini, Castor and Pollux (and the name appropriation on Gemini is the thinnest of veils), to Loki & Thor (the Norse legends & the movie) to Jacob & ‘Barry’ on Lost.  But, like most concept records, the story is inessential and mainly appears just as reoccurring words and phrases.  However, the theme is a leaden one, which doesn’t let up and so weighs down the record – even the central title track doesn’t overwhelm, while others are just overwrought.

The real fault at Gemini‘s heart is its arrhythmia.  Why do bands ever abandon rhythm?  It’s only been the basis of music since prehistoric jungle drumming.  Admittedly, Cursive’s biggest hit “Dorothy At 40” (from 2004’s acclaimed Happy Hollow) changed beats, and even had a story-myth concept, but in this case what works in a single piece only exhausts over an entire record.  After the ‘big rock concept opener’ “This House Alive” and bit of bop to the following “Warmer Warmer”, Cursive shifts gears like a teenager learning stick, especially grinding when done with the band’s hardest sounds to date.  The stop-start mars the pressing rock of “Drunken Birds”, and doesn’t get better from there.

I Am Gemini isn’t the worst ‘concept album’, not by far, but that’s faint, faint praise, considering that the ‘concept album’ concept (and its even worse sibling, the dreaded ‘rock opera’) has rarely been done well – and then only when the concept is ultra-simple (Sufjan Stevens’ songs about his home state of Illinois – QRO live review) or barely sketched (the supposed plot behind Hüsker Dü’s Zen Arcade – QRO spotlight on).  And it’s not gonna work when married to hard grind and stop-start arrhythmia.  Hopefully the better side of Cursive will emerge with their next release.