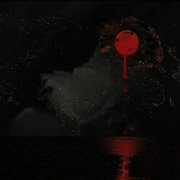 Omaha’s Cursive have always been a bit difficult to grab a hold of.  Most notably, there’s the band’s reoccurring disappearing acts, from their break-up in 1998 (three years after they started) to reuniting the following year, to their hiatuses pre- and post-2006’s Happy Hollow, with Tim Kasher taking time off for his solo side-project, The Good Life (QRO album review).  Then there’s their sound, which seems to influence everyone from fellow Omaha local/labelmate Bright Eyes (QRO album review) to emo to hardcore.  While still a bit of an enigma, Cursive make the strongest case yet for themselves on their latest, Mama, I’m Swollen.

Just as how it took three years for the band to put together Hollow (in the process, losing cellist Gretta Cohn), it’s taken Cursive three years to follow that up with Mama (and lost drummer Clint Schnase).  And just as Hollow evolved from the band’s earlier, more introspective work, which verged on emo, Mama moves forward even more, right from the get-go.  The pressing, speedy outcry of “In the Now” opens the record strongly, but Cursive is also able to play it slow and restrained to start the following “From the Hips”, with that track’s swaying drums world-weary, but also world-wise.  “Hips” does speed and loud up near its end, but both avenues are present on Mama, as is the more straightforward, but epic alt-rock of “I Couldn’t Love You”.

Click here for photos of Cursive at Bowery Ballroom in New York, NY on March 10th, 2009 in the QRO Concert Photo Gallery

Click here for photos of Cursive at Culture Shock Festival at SUNY Purchase in Purchase, NY on April 19th, 2008 in the QRO Concert Photo Gallery

Click here for photos of Cursive at Siren Music Festival on Coney Island in Brooklyn, NY on July 21st, 2007 in the QRO Concert Photo Gallery

Those first three tracks are the strongest on Mama, and the first side (including the restrained to melody & rhythm “Donkeys” and the upswing with a certain ironic detachment “Caveman”) is definitely the stronger one of Mama.  The back half is weighed down by “We’re Going To Hell”, whose over-restraint brings it to almost nighttime jazz levels, but without enough skill, and “Let Me Up”, whose staccato and plead don’t come together right.  But even though Mama ends with the somewhat too preening sway of “What Have I Done?”, that song is preceded by the interesting title number, with its near-disco-ish drumming underneath epic rock.  And the second side still contains “Mama, I’m Satan”, the best restrained track on the record, thanks to more melody and pressing rhythm, which grow into something truly effective.

Like their home of Omaha, Cursive is somewhere in between everywhere in alt-rock, yet difficult to find on a map.  Hopefully the band won’t pull another disappearing act, because Mama, I’m Swollen is the best answer yet for why they should stay in the game permanently.