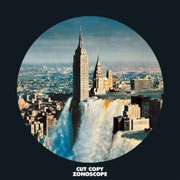 After releasing the near perfect pop record In Ghost Colours (QRO review) in 2008, fans and critics waited three long years for the Australian band, Cut Copy, to set their “hearts on fire” again.  Their third full-length album, Zonoscope, will undoubtedly ignite some sparks on the dance floor, but the free-spirited charm of In Ghost Colours has now been disciplined.

Zonoscope finds the Melbourne band harking back to their genesis, when Cut Copy was essentially Dan Whitford, experimenting with looping electronics on 2001’s I Thought of Numbers EP, before becoming a band with Tim Hoey, Mitchell Scott and Bennett Foddy.  Foddy’s involvement was ephemeral, and Cut Copy rose to their height as a trio.  With the addition of bassist, Ben Browning, The Cutters (Cut Copy’s nickname) are a quartet once again, with emphasis on the rhythm over melodies on Zonoscope.  The Aussies have trekked from the sunny beaches of the Sunshine Coast to the more untamed lands of the Outback.

The exploratory feel of Zonoscope undoubtedly comes with caution.  The opener, “Need You Now” has enough melody and organic vocals to reminisce In Ghost Colours – strategically placed to warm up the listeners.  Whitford pleads, “Know we’re going crazy but I need you now” [unofficial lyrics], recalling sorrowful warbling of Andy McCluskey of OMD.  By the third track, “Where I’m Going”, fans will realize that The Cutters are leaving the safe composition of a pop album to follow the drumbeats, wondering if Fleetwood Mac and The Talking Heads had traveled the same road.  Packed with all kinds of percussion and synth wars for a trance-inducing experience, Cut Copy packs in lot of elements in their music.  At times, the songwriting feels overindulgent as in “Corner of the Sky” – a collage of genre references that goes through too many mutations to have its own identity.  The 15-min. closer, “Sun God”, feels epic at times, but fails to encapsulate the album.  Nevertheless, Zonoscope incorporates enough allure of In Ghost Colours to keep the connection with their fans, while moving onto new ventures.  “Pharaohs & Pyramids” and “Blink and You’ll Miss a Revolution” prove to be the most successful offspring of their taste for the nostalgia and the future.  A “Strange Nostalgia for the Future” indeed.

Those who fell in love with In Ghost Colours from the first spin may not have the patience for Zonoscope to reveal its full appeal.  This is an album that improves with time – give it about three weeks or so and you’ll start to make sense of the once senseless that reiterates Cut Copy as the master of their craft.