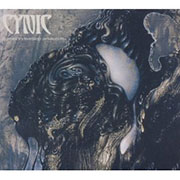 Cynic have always been an enigmatic band.  It took non-metalheads years to recognize Focus as the landmark album that it was, and that the diverse and mystical little EP Carbon-Based Anatomy slipped under the radar just goes to show how far ahead of the game Cynic remains.

Many will talk about "Box Up My Bones" and "Elves Beam Out" but the real genius of the album is in the first three tracks.  The eastern-flecked "Amidst the Coals" is the kind of track that Sun City Girls would have put on any number of early ‘90s groundbreaking releases, if the edges weren’t filed so far down.  It’s as subdued a track as Cynic has ever released and the results are superb.  After that, the title track is Cynic diving full steam ahead into post-rock (or prog-rock, or whatever genre name does it for you), and finding a new kinship with Katatonia (hopefully they can hit as big a home run as Night Is The New Day on their next LP).

To follow this up, "Bija!" is probably the best song of the album.  It feels like the background music to an old episode of the TV cartoon version of Tintin with all the heat and gloss switched for ice and machine-like precision.  The album then gets predictable on the aforementioned "Box Up My Bones" and "Elves Beam Out" but ends with the beautiful, pulsating slow-burn of "Hieroglyph".

The hardest part for all metal bands that abandon harsh vocals is to make clean vocals not seem unbearably stupid, and/or the most egomaniacal bullshit they wrote in their journals in high school.  This is the only place that Carbon-Based Anatomy falls short.  They finally find the perfect recipe on "Hieroglyph", but it takes a few mistakes on "Elves Beam Out" before getting there.  Despite this little issue, this can’t be seen as anything but a step forward for Cynic.  They will top Focus before they run out of time as a band.

The biggest compliment one can give this EP is that it will make you break out your old Sun City Girls albums, and if Cynic can continue to hearken back to such landmark albums as those, they are certainly heading in the correct direction.  Start saving up your pennies (or bandwidth) for their next release, expected in 2012 – it should be some of the most exciting music around.