<img src="http://www.qromag.com/wp-content/uploads/2011/06/daleearnhardtjrjritsacorp.jpg" alt="Dale Earnhardt Jr. Jr. : It's a Corporate World" /><span><i>It's a Corporate World</i></span><span> is a strong debut, it's varied but not without direction, it's happy but... 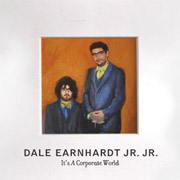 This is the first album offering from the Detroit duo, a group who seem to have been making rumblings on the scene for quite some time.  It’s a Corporate World is a strong debut, it’s varied but not without direction, it’s happy but not sickly sweet.

Click here for photos of Dale Earnhardt Jr. Jr. at SXSW 2012 in Austin, TX in the QRO Concert Photo Gallery

From the twinkling opening of “Morning Thought” to the chilled electronic closing of “The Fisherman”, the album sends us on a journey though melodies and vocals that any self respecting indie pop fan would salivate over.  The album is littered with beautiful songs like “Simple Girl” and “Skeletons” which have the potential to be summer classics.  Some darker moments are created in “When I Open My Eyes” with its trip-hop inspired backing, but the instrumental interlude “Husbands”, which follows it, puts the album back on its sunny way.

The songs sometimes slip into the dangerous territory of ‘too happy’, main offenders are the title track (which could pass for a children’s TV theme tune) and “Vocal Chords”.  But both are saved by being just so damn likable.

There’s a balanced mix of guitar led and electro-layered tunes, meaning the sound never gets derivative.  Some thought has gone into the track listing so that the end-of-album fatigue sometimes created by other artists is never felt.

The lyrics are occasionally a bit simplistic, but obvious rhymes are not the worst thing to ever happen to a record (I’m sure even Dylan himself has rhymed ‘stay’ with ‘away’).  And it does mean that you can sing along during a second listen, should you be that way inclined.

Arches – “This Isn’t a Good Night For Walking”