Damon Albarn – The Nearer the Mountain, the More Pure the Stream Flows

Damon Albarn has become a leading light in modern world music in the twenty-first century.... 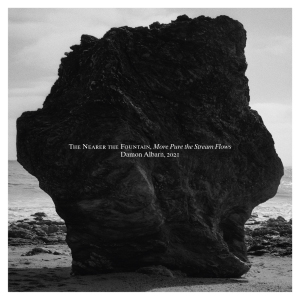 While he began in the very British Brit-pop scene of the nineties fronting its defining act, Blur, Damon Albarn has become a leading light in modern world music in the twenty-first century. He’s journeyed to China in Monkey: Journey To The West (QRO review), showcased African sounds in Africa Express, even gone virtual (and worked with seemingly everybody) in Gorillaz (QRO livestream review) – and also, reunited Blur (QRO album review). For his second solo album, after the technological distance of 2014’s Everyday Robots (QRO review), he embraces the sad tropics like an ex-pat exile with The Nearer the Fountain, More Pure the Stream Flows.

Click here for photos of Damon Albarn at 2014 Governors Ball in New York, NY in the QRO Concert Photo Gallery

Click here for photos of Damon Albarn at SXSW 2014 in Austin, TX in the QRO Concert Photo Gallery

Eschewing Blur’s guitars or the electronics of Gorillaz, for Fountain Albarn plays sad piano man, some lost soul in a hotel bar in the Mediterranean, Latin America, or some tiny island that’s still part of what’s left of a European empire. Indeed, there’s a certain tropical seventies nature to the songs, the lights going out on the old world with no great hope of what is to come. It’s all done best on single “Tower of Montevideo” (QRO review), a tribute to the iconic Palacio Salvo building in the Uruguayan capital (and Albarn correctly pronounces the city’s name…).

However, while distinctly a beautiful slow & sad record, it is a lot of slowness & sadness to take in. Even the relatively more upbeat pieces, such as “Royal Morning Blue” and “Polaris”, are still somber. And the lead position that the piano takes runs on as the record runs on, including three instrumentals. It’s more akin to his downbeat work in yet another collective of his, The Good, The Bad & The Queen, in 2019’s Merrieland (QRO review).

The Nearer the Fountain, More Pure the Stream Flows is a beautiful record of loss that is so moving as to almost make you not want to listen to it again. But if you want Pure sadness, this is the Stream.