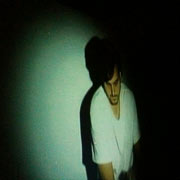 Omer Liebovitz is the singer/guitarist in Brooklyn duo Courtesy Tier (QRO album review), one of the brightest undiscovered gems in a borough full of them, yet for some reason he decided to go by ‘Dan Abraham’ when he released his solo EP, Dead and Yelling.  It was probably just to distinguish and separate this product from his Courtesy Tier work, as good as Tier is.  Dead and Yelling strips down Liebovitz/Abraham to a more focused loss.

At only five tracks (and the middle piece, "Country Morning", is a forty-one second instrumental interlude), Dead and Yelling still has the feel of more of an introduction, but it is a good one.  Loss pervades the EP, from the dark haunt of "Loving It" at the start to the fuzzier distance at the end in "Everyone’s Ok".  In between, in addition to the interlude, there is the twang-loss of "Tired Liar" before it and the very stripped down "Set In Stone" after it.  All the pieces are evocative and effective – though the "Stone" refrain of "Things get real" unfortunately brings about thoughts of the bro statement, "Things just got real!"

One may question whether the singer/guitarist of a guitar-and-drums duo needs to do a solo album, but The Black Keys’ (QRO album review) Dan Auerbach did (QRO review).  However, as ‘Dan Abraham’, Omer Liebovitz eschews his duo’s impressively fuller sound (fuller than most guitar-and-drums duos) for a very effective stripped sound.

[update: ‘Dan Abraham’ is actually the name of Liebovitz’s grandfather and girlfriend’s father, both of whom passed away recently.  The record began as tribute to them]