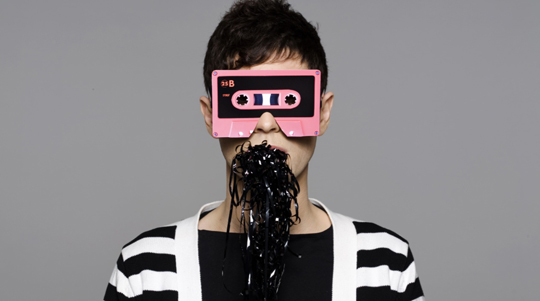 Dan Black is an interesting character.  With his big dark doe eyes and polite sarcastic manner, makes for an interesting conversation, to say the least.  Beloved in Europe and bursting on the American festival scene (QRO Festival Guide) with appearances at CMJ (QRO recap), SXSW (QRO recap), and WMC (QRO preview), Mr. Black is very much on our list of artists to keep your eyes on in the coming months.  Originally in the bands The Servant and Italian group Planet Funk, he has struck out on his own with the strong release Un (QRO review) featuring a collab with Kid Cudi (QRO photos) on "Symphonies".  As an artist as in person, Dan Black is frank and fun.

QRO: So how are you doing on this cold morning?

Dan Black: Yeah, very jet lagged, six hours time difference.  I haven’t seen a lot of New York because I basically been to a hotel and then come here and have been doing interviews all day.  What I’ve seen I loved.  I’m here till Sunday night.

QRO: Where are you playing?

QRO: For anyone not lucky enough to be familiar with your music as of this point, please give us a description of what Dan Black is about.

DB: [laughs] Okay, uhhhh.  I make music on my own.  Out of a studio in my apartment.  Have things that I love quite disparate and not quite the sane world.  So I love things like kinda the more unusual experimental side of R&B and hip-hop production.  The more kind of crazy stuff like obvious things like Timbaland and more obscure stuff like Prefuse 73 (QRO photos) and Flying Lotus (QRO photos).  That sort of things.  And on the other end of the spectrum I like the English alternative sad, happy sad, emotive like The Smiths or Joy Division.  And so these two things, I mean there are other things I love like Prince and Bjork and stuff like that but my music’s kinda me trying to squash all those things into a milkshake maker and see what comes out.

QRO: That was good.  All right so what’s the live act about?

QRO: I haven’t seen you live yet, what should I expect to see tonight, here?

DB: Um… well obviously I make my music mainly in the computer.  So translating music from the computer to live shows tends to be very difficult and not very interesting.  So there’s four other guys on stage with me and we just didn’t want to do something like two guys sitting at a laptop; that would be boring.

It’s kinda simple but it’s people hitting triggers.  Anything you hear is being played by people live.  There’s pads and there’s a guy playing electronic stuff.  All of the drums are on the computer and a guy’s playing a fully electronic kit full of beats live.  Another guy has a keyboard velcro’d to his trousers and he is playing keyboard.  And then there’s live guitar and bassist.  It’s trying to make music made on computer as live and as… real as possible, I guess.  And for it to be connected for an audience.

I try and sacrifice, the record is more intricate and lives it’s a bit more… simplified and more to the point.  And kinda slightly more barbaric arguably.  It’s kinda more… You know I want it to be inclusive and giving and a little break of joy and emotion.

QRO: Where are you in the midst of this?

DB: To put it to words, I’m very physical and I move a lot and try and let go.  What will be will be.  In a way I try not to think about what I’m doing and ponder it much outside of it or else it might get a bit contrived so… Yeah it’s quite physical and I try and help people let go.

I think the thing that makes the show is the audience and what makes a good audience is an audience that’s giving and is prepared to let themselves get involved in the music.  And so if they can see me not being too hung up.

Part of my job is to let others kinda go, ‘Oh!  He’s making a fool of myself, maybe I should too.  Maybe I could too!’

So I try to change the mood of the room into something unusual.

QRO: You’ve played a lot in Europe, how do you feel the audiences differ country to country?

DB: Well obviously I’ve played one show in the states before and that was twelve years ago so my knowledge of American audiences is pretty limited but even within Europe, I played a lot in Europe, I played in Russia.  But even within Europe a French audience and an English audience is very different, and then once you play there enough a difference between a show in Paris and a show in the south of France are really different.

So it’s like anything.  If you’ve never had ice cream before and you never had I don’t know… fruit, you’re like oh these things are really different!  But when you start getting into each of them there’s many so.  You can go from one venue in Paris down the road to another one and it’s a different audience.  But I couldn’t say about America yet…

QRO: So I’ll have to ask you later…

QRO: Have you had any crazy experiences at shows?

I’ve had fans come up and they’ve had my name tattooed on their arm in Sanskrit.

And they said, ‘This is your name, eh?’  Or you know people making crazy things.  "I’ve made you this" or something.  I can’t remember things people made me or making a book.  Like a notebook, like handmaking the paper and then sewing it.  I guess it’s lovely but it’s like, ‘Why have you done this?  Why is this for me?’

And then more random people following you just… it’s just the more extreme weird things that just disturb me so I try to forget them and now I’m dragging them up I’m like oh my god.  I mean people following you in taxis across the city.  What do you want? [laughs] Leave me alone.

QRO: How does that make you feel?

DB: It’s lovely.  I love people to love my music and what I’m doing.  But I don’t do it for people to be… weird with me.  Artists I love, I don’t have any desire to….

DB: Harass them, to be personal with them.  I don’t have that desire.  I see them as… I love their, I want to know about them.  I understand people wanting to know the story, to know the relation between an artist and their work and that’s really interesting.  But as a fan of other people I don’t want to meet them, to be their friend.  So when people want to do that with me I find it difficult to understand.  It can be nice, obviously I like meeting people if they want to be friendly it’s cool.  But when, ‘I’ve got a voodoo doll I made of you out of chocolate,’ you’re like, ‘Alright Ken… Please let me alone.’ [laughs]

QRO: What is the relation between an artist and their work for you, how do you write a song?

DB: It depends I mean… the common thread is that each time I kinda have to start from zero because the best things I’ve most liked that I’ve written tend to happen when there is a surprise element.  And I’m like, ‘Whoa I didn’t expect this!’  And that tends to happen when you try something new.  So each time I’ve found that I write something that I really like if I use the same method it tends to become nothing.  You’re trying to come up with a new, you’re tricking yourself, you’re tricking you brain into being in a state it’s never been in before.  And going, ‘Ooh what about this idea?’

So I’ll sometimes do a cliché style piano, and other times I’ll sample other things and put them together and play them out of the speakers really loud and sing along.  Or other times I’ll sing over someone else’s song and take away their music and write my own song.  Thing’s to keep myself un-in a rut.  Fresh.  So yeah, the process always changes.  Normally, though, music and then lyrics kinda come at the end, sometimes the other way around, but normally that.

QRO: So what comes after this?  What’s your general plan for the new few months?

DB: I’ve got a lot of shows all over Europe coming up.  I’m coming back to the States in December at the same time I’m trying to do production and write for other people, do some collaborations on some stuff.

QRO: Who are you collaborating with?

DB: Well, some people, I’m not allowed to talk about.  But if it comes to fruition I can, and then some people, artists in the U.K.  Robots in disguise, a pair of characters.  I’ve known them for a long time actually.  Who else am I thinking of?…  Can’t talk about that.  I’m doing some writing for people but their not people you would know.

I spent a year and a half doing stuff totally on my own for my album.  Being super-selfish, really, like just one man’s idea.  That was the reaction of being in a band, when I was like, ‘I’m sick of people compromising on what I want to do.’  But now I’m like, ‘Okay now I want to add someone, one, call them, mess things up a little.’  I’m quite slow, so well I come up with ideas fast, but to get them how I realize them takes quite a while.  It’s fun to do a big studio thing, to track, to set up with people and play but I like the same kind of thing.

Like a painter in a canvas, I like the fact that you can have this thing up for days and days and tinker with it, go over it and it goes through a journey

.  I like that.  The favorite part of what I do is to make music.  I like the play experiment thing.