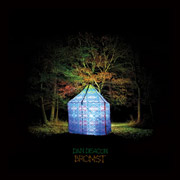 Though he’s been making music since his days at Purchase College in New York State (even played tuba for Langhorne Slim – QRO live review), Baltimore’s Dan Deacon only first got real attention in 2007 with Spiderman of the Rings, a record that combined the inventive industrial-tronic of Charm City’s fellow Animal Collective (QRO album review) with his own more pressing beats and cartoon-like super-high vocals, most notably with the record’s one-two opening, “Wooody Woodpecker” and “The Crystal Cat”.  And Deacon only built upon that with his electric live show, where he would stand in the crowd, at the lip of the stage, playing his giant board of gizmos while encouraging the dance-tastic audience to not only go nuts but perform certain rituals like putting their hand on top of the head of the person in front of them.  Last year, Deacon released The Ultimate Reality DVD, performed at museums like New York’s Whitney and Los Angeles’ Getty, and closed out the year by introducing his fourteen-piece ensemble (fifteen, including himself) at a wild show in Brooklyn.  Now Deacon attempts to keep it going & growing with the new Bromst.

Click here for photos of Dan Deacon at 2012 80/35 Festival in Des Moines, IA in the QRO Concert Photo Gallery

Click here for photos of Dan Deacon at 2011 Moogfest in Asheville, NC in the QRO Concert Photo Gallery

Click here for photos of Dan Deacon at Bowery Ballroom in New York, NY on May 16th, 2009 in the QRO Concert Photo Gallery

Spiderman’s infectious beats and renowned live show have threatened to turn Deacon into one of those acts who are way better live than on record (sort of the opposite of Animal Collective), like many of the bands he’s heralded out of Baltimore (or those who, like Deacon, play the wild Brooklyn house parties of Todd P).  And while Bromst can’t match Deacon live for energy, or the 360° experience of The Ultimate Reality, it definitely sees Deacon reaching higher, most notably in a number of tracks that do that literally, going for a higher atmosphere.  It starts right at the start with the slowly growing “Build Voice”, which begins by moving up in volume, then in pitch, to a level of atmospherics Deacon is not known for.  That kind of growth is almost virtually reprised in the middle with “Of the Mountains”, while other tracks start & stay that high, like “Padding Ghost”.

The middle of Bromst sees Deacon reach his farthest, sometimes well, sometimes not so much, but definitely differently.  The strongest is “Snookered”, slow and more echoing, giving it real meaning and making it an accomplishment for Deacon (though probably not the best track live).  However, the high female chorals of “Wet Wings”, while even more original and unexpected, are not that enjoyable.  The combination of high Bromst Deacon and speedy Spiderman Deacon on “Surprise Stefani” doesn’t add up so well, but fits together nicely on “Slow With Horns/Run For Your Life”.

And Deacon doesn’t ignore his pressing Rings side completely on Bromst.  Early on, “Red F” keeps the rapid fire, with a fuzzed-out voice, but it is near the end of the album, with “Woof Woof” and “Baltihorse” that the cartoon-like vocals really return (also retaining the animal theme of “Wooody Woodpecker” and “The Crystal Cat”).  Then Bromst finishes with the speedy instrumental send off, “Get Older”.  Hopefully, Deacon isn’t too old for his live shows, and seems to be aging fairly nicely on record.