It would be easy to dismiss the Daryl Hall & John Oates / Squeeze tour as just another greatest hits nostalgia tour. You’d be only partly correct.... 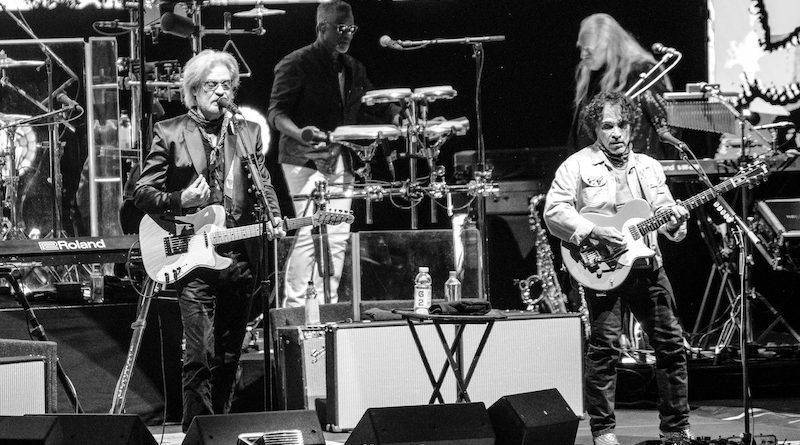 It would be easy to dismiss the Daryl Hall & John Oates / Squeeze tour as just another greatest hits nostalgia tour. You’d be only partly correct. There were indeed lots of hits, rough vocals, and musical miscues, just not from who you’re thinking.

One of the considerations that go into choosing a supporting act on your tour is, or should be, is this act going to outshine us. Somebody should have told Hall & Oates this. What should have been Hall & Oates with “some opening act” at Hard Rock Live in Hollywood, Florida on Wednesday, September 22nd ended up being Squeeze with somebody closing out the night. Squeeze, from the opening notes of “Take Me I’m Yours”, Squeeze dominated the night while only having one song that most people can name. Go ahead, name more than one Squeeze song without help. Right. The East London lads, dressed in splendid suits, were entertaining the whole set through while looking like they were having a blast. Nothing was being phoned in here, this was pure love of making music. On the other hand, there was the phoned-in, roughshod performance of Daryl Hall & John Oates. From the onset, there were sound system problems including a bad mic and guitar feedback, and not the “Hendrix shredding the Star-Spangled Banner” type but the “what is wrong here” type.

Having formed in 1974 and is almost singlehandedly responsible for the birth of the New Wave and the Second British Invasion, Squeeze are the most famous band that you’ve never heard of. This despite Glenn Tilbrook and Chris Difford being once called the next Lennon/McCartney. The ‘70s showmanship that was their hallmark hasn’t dimmed. The beautiful outfits, the contortions and rhythmic gyrations are still there along with their version of the Rhythm Devils featuring a percussionist as well as a drummer. While most of the setlist left the crowd asking one another what the name of the song is these weren’t exactly deep dives or B sides, just songs that weren’t huge in the States. There were, however, three songs that some people knew. There was the smash hit “Tempted” and lesser hits “Pulling Mussels From a Shell” and “Black Coffee In Bed”. Between songs there was the banter between the lads and the audience, there were jokes, stories, and much recalling of the old days. These guys love what they are doing. There were two highlights of this set, one being the Chris Difford handling the baritone lines on “Tempted”, the same lines that Elvis Costello sang on the studio version, the other being the encore “Black Coffee In Bed”, which other than being a tasty little number featured a very Grateful Dead-like jam that ran close to 15 minutes with each member of the ensemble getting the spotlight including both percussion and drums and a yummy bass solo. Now, onto the rest of the evening.

When you queue up to see Hall & Oates there are certain expectations. There will be Hall with his flowing blonde mane and Oates with his moustache, there will be hit after sing-a-long hit. That’s all one should expect and you wouldn’t be disappointed last night if that was where your bar was set. If, however, you were expecting the same guys that you saw at The Spectrum in Philly thirty five years ago, the guys with huge voices, charisma, and a stage presence, you would be disappointed.

Click here for photos of Daryl Hall & John Oates at ACL Live at The Moody Theater in Austin, TX on May 26th, 2013 in the QRO Concert Photo Gallery

To be sure there were hits, lots of hits that the capacity crowd knew every word to. The problem is that the hits were delivered poorly, by a Daryl Hall whose voice seemed to be straining for every note and a band whose miscues however unapparent to the crowd, were there nonetheless. A B minor instead of a B in “She’s Gone” can be forgiven as can other minor annoyances. The problem is that these little glitches went on song after song. This was a band, including its namesake leaders, that seemed to be here in body only, merely going through the motions of yet another show. Where was the bubbly and technical Daryl of “Daryl’s House”, whose spontaneity and riffing made it must-see TV? Where was the Oates of “Mississippi Mile” fame? Not on stage at the Hard Rock Live, that’s for sure. They were replaced by animatronic stand-ins that played well to an oblivious crowd that only cared that they were hearing “Maneater” and “Private Eyes”.

This was a great night of music, just not by the headliners.