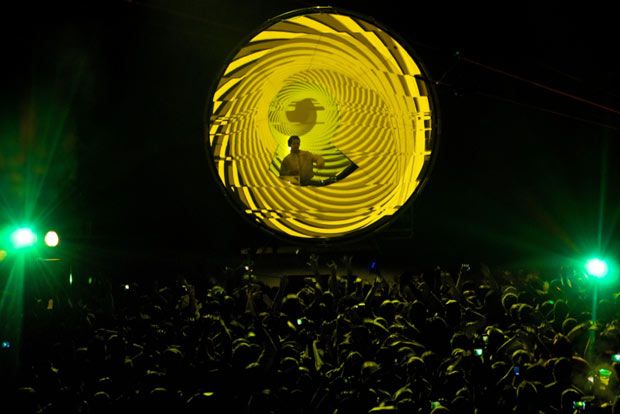 Dubstep shows are a spectacle.  Dubstep shows on Halloween night are a carnival.  At least that was the case this Halloween when British Columbian Dubstepper DatsiK put on a Halloween ball at the Midland in Kansas City.  Concertgoers lined up outside the midland in KC’s Power and Light District, dressed to impress.  There were skeletons, Batgirls, Pokemon trainers, and sexy varieties of every costume imaginable.

The Midland is a terrific venue for such a night.  Built in 1927, the grand old theatre is adorned with French and Italian Baroque style, and when it gets all dressed up for Halloween, it makes for something mysteriously grandiose.  Cobwebs, ghosts, dark corners, all combined with the magnificent high ceiling, the scene felt like a Halloween ball from the past, filled with ghouls, goblins and about three giant deadmau5 heads.

Once the opener took the stage, and the mechanical hip-hop inspired beats and bass wobbles begin to rumble the rafters, the aura shifted from Halloween ball to a good old-fashioned rave.  People were there to dance.  Getting close to somebody and grinding like you’re trying to start a fire was clearly the main objective of the night for most in attendance.  The whole array was reminiscent of the ‘cave rave’ dance scenes in The Matrix.  There was no room to wiggle (unless you plant yourself firmly at the back of the theatre), and everyone surrounding you was completely committed to having a good time.

There came a point in the show where you’re so crammed in that you’ve got no choice but to dance, the very movement of the crowd around you meant it was impossible to stand still, and then it became easier to forget about the outside world and dance your troubles away than it was to be stoic and observe.  It’s almost as though the music didn’t matter.  DatsiK’s special blend of electronica is refreshing in that he uses mostly original samples.  Rather than sampling Dubstep to make Dubstep, he actually seeks out samples to give his music some originality.  But originality is not the trait that mattered at a show like this.  It’s bass, it’s swagger, it’s the ability to craft rhythms that make standing still a physical and musical impossibility.  It’s about throwing the dance floor full of tweaked out teens and pill popping ravers into fits of uncontrollably frenzy.

DatsiK did just that, and that it all took place on Halloween night made it all the more unforgettable.  Dubstep shows are freaky enough on any given weeknight, but give the already costume-prone fan-base an extra excuse to wear something outlandish, and they’ll grab that chance with both hands.  Dubstep is the best Halloween pastime. 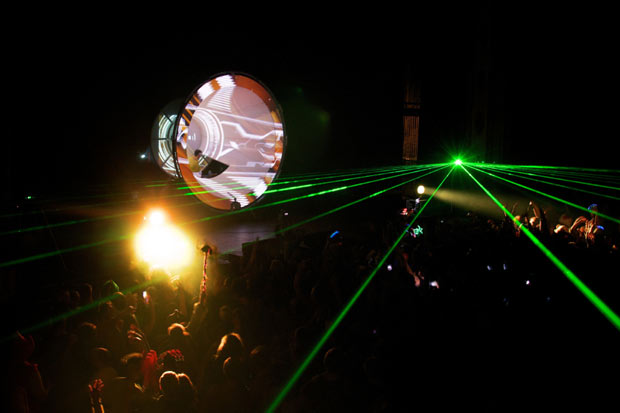