Dave Matthews Band : Away From the World

'Away From the World' does not put off that classic jam band vibe that Dave Matthews Band are so well known for, but it also isn't a drastic departure... 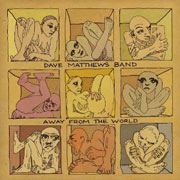 Overall, Dave Matthews Band’s latest studio album Away From the World does not put off that classic jam band vibe that they are so well known for, but it also isn’t a drastic departure from what Dave Matthews Band fans are used to.  Evolution of sound and technique is something to be commended, and this may sound odd, but with an act like Dave Matthews Band (who is so pigeonholed as it is) they might as well stick with what they are good at, at this point in the game.  It would be like if Nickelback in another five or ten years decided to change things up.  There would be a resounding, “Why bother?” from the general public.

This album is, however, a return to form of sorts in that it marks the re-teaming of the band with famed producer Steve Lillywhite whom they have worked with extensively in the past and who is responsible for producing some of their most famous albums (namely, their first three).

Click here for photos of Dave Matthews Band at Lakewood Amphitheater in Atlanta, GA on May 28th, 2016 in the QRO Concert Photo Gallery

Click here for photos of Dave Matthews Band at Cynthia Wood Pavilion in The Woodlands, TX on May 16th, 2014 in the QRO Concert Photo Gallery

Click here for photos of Dave Matthews Band at Cynthia Wood Pavilion on May 18th, 2013 in the QRO Concert Photo Gallery

Click here for photos of Dave Matthews Band at Cynthia Wood Pavilion on May 18th, 2012 in the QRO Concert Photo Gallery

Away From the World is Dave Matthews Band’s first studio album since 2009’s well-received Big Whiskey and the GrooGrux King and is their second studio album without saxophonist LeRoi Moore who passed away in 2008 from complications involving an ATV accident.  While Moore had already recorded some saxophone parts that are featured on Big Whiskey, Away From the World is a bit momentous as it is the first studio album that does not feature him at all.  But Away From the World is absolutely not the group’s only album released since 2009.  In true Dave Matthews Band fashion, there have been a total of four live albums released from then until now, which brings the total number of ‘official’ live albums the band has released to a whopping 18.

Away From the World feels like a bit of a continuation of Big Whiskey in many ways.  First off, Dave Matthews himself drew the cover art for both albums.  Second, both albums feature a more prominent use of electric guitar by none other than long-time Dave Matthews collaborator Tim Reynolds.  The third way that these two albums are very similar is that they employ more of a full ‘horn section’ feel rather than the solo horn feel they have gone with for so many years.  On Away From the World this is best evidenced on the song “Belly Belly Nice” (classic DMB track name, by the way).  As far as electric guitar goes on this record, which shows up best on the songs “Broken Things” and “Rooftop”, the latter of the two sounding a bit more like ‘classic’ Dave Matthews Band.

One thing that Dave Matthews has always had going for him aside from his amazing songwriting talent is his distinct voice, and obviously it is present all over the new album.  Why wouldn’t it be?  However, there are times where it can get slightly old.  If you took a voice continuum and put Scott Stapp at one end and Aaron Neville at the other, Dave Matthews would be smack dab in the middle.

Away From the World is a decent album.  That fact is certain, but one cannot help but wonder if there is still a spot for Dave Matthews Band in popular music.  It may seem odd to draw this comparison, but what they are doing feels a bit reminiscent of what Hootie and the Blowfish was trying to do with their last couple albums – stay relevant.  Both bands seem to fit into a category of music that is somewhat more ‘specialized’ (for lack of a better word) to the point where looking back on their careers, there was a specific time and place they were meant for and maybe nothing more.  *Enter hate mail from Warehouse members here*

*Special thanks to Nick Ficklin for being a consultant on the writing of this review.

The Vaccines : Come of Age