David Bowie – The Next Day

David Bowie. The man, the myth, the legend. You know him, you love him, you’ve been wondering where’s been.... 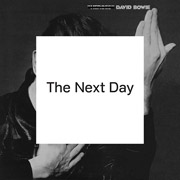 David Bowie.  The man, the myth, the legend.  You know him, you love him, you’ve been wondering where’s been.  Ever since his heart attack a decade ago, the Thin White Duke’s appearances have been few, and new material even less so.  It got to the point where just a sighting of Bowie was an event, and any Bowie activity (like curating 2007’s Highline Festival in New York) was a big deal.  But this is the century/millennium of returns, and even David Bowie isn’t immune – first he shocked the world on January 8th of this year, his birthday (also that of Elvis Presley, Graham Chapman, and Kim Jong-un) by not only releasing his first piece of new material in years, single “Where Are We Now?” (QRO review), but also by announcing his upcoming first new studio album in a decade, The Next Day.  With all of that pent-up anticipation, could anything really live up to it?

After Bowie’s seventies glam-rock heyday and Berlin reinvention, but before his more modern, even neo-classical work in the nineties, the icon tilted towards soul-rock in the eighties, even basically starting and ruling the trend of rock songs with saxophone solos (think “Young Americans”).  While he hit his commercial peak in 1983 with Let’s Dance and songs like “Under Pressure”, his dance-oriented material from that era hasn’t stood the test of time (like so much from the eighties) as his seventies prime.  Yet The Next Day largely, though not entirely, draws from that period, or at least feels more eighties Bowie than any of his other many incarnations.  It all starts with the album’s up-active title track/opener, and goes on with the slyer following “Dirty Boys” (which has lots of sax), nighttime eighties “The Stars (Are Out Tonight)” and “Live Is Lost”, and comes back around in the back half on the dance “Dancing Out In Space” and others.

There are some exceptions to this rule.  “Where Are We Now?” explores seriously sad loss in Bowie’s more recent neoclassical style, making it a stand-out track – and a poor indicator of what the rest of The Next Day would be (admittedly, many who worked on the album said as much after the single came out).  There’s a bit more glam on “Valentine’s Day”, “If You Can See Me”, and “I’d Rather Be High”, but each is mixed with something else – almost country-rock backbeat guitars to “Valentine”, electronic push behind “See Me”, and an airier sixties chorus in “High”.  Bowie evokes the lady superstar of such classics as “Diamond Dogs” and “Suffragette City” on “(You Will) Set the World On Fire”, but it’s still in bigger eighties soul-rock Bowie.  The loss of “Where” comes back in “You Feel So Lonely You Could Die”, but in a maudlin way (just look at the song title…).

David Bowie was never going to repeat the sheer greatness of his seventies stardom (there’s only one Ziggy Stardust, can’t have a second “Life On Mars”…), and wisely & skillfully has reinvented himself numerous times to stay not just relevant but important – and good.  The high hopes of his return were never going to be matched (he was away twice the length the earth had in “Five Years”…) – and his eighties period did produce such wonders as “Modern Love” and Labyrinth (and “Dancing Out In Space” ain’t the cheesy Bowie/Jagger rendition of “Dancing In the Streets”).  So just sit back and love that Bowie is back – and cross your fingers about a tour…