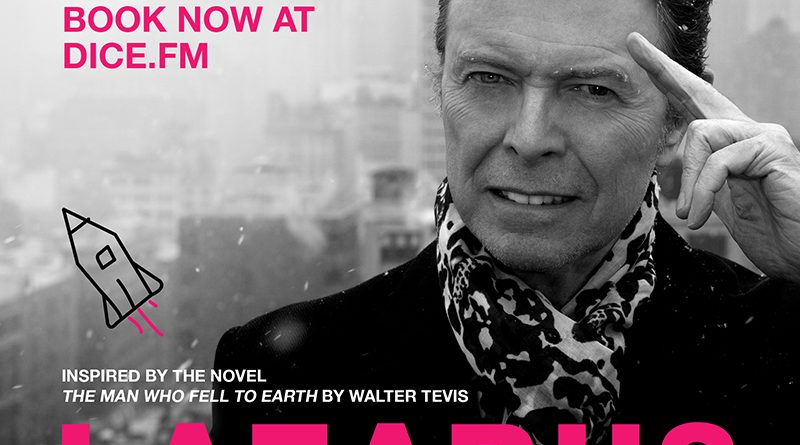 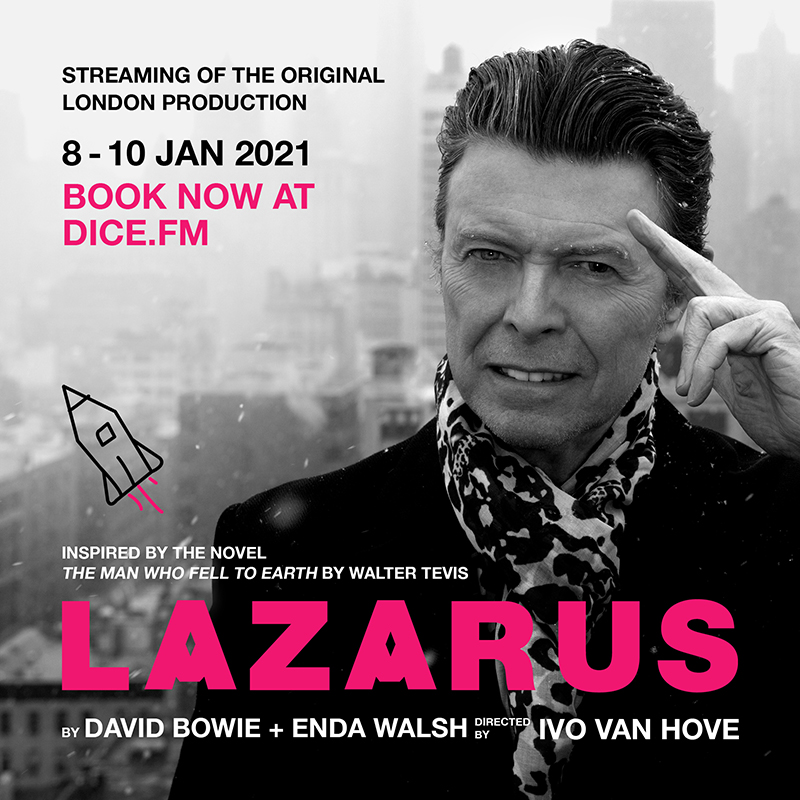 We live in very strange times, from Britain being under lockdown to right-wingers storming the Capitol as the President & others basically egged them on. You are likely reading this stuck at home, either laboring over Zoom, have an at-risk essential job, or out of work and don’t know when/if you’ll be back. Yes, 2020 ended, but as U2 warned us, “Nothing changes on New Year’s Day.” People have been getting by, even reinventing, like a number of livestreams by artists & performances who can’t be in-person. A really special one is coming this weekend, David Bowie’s musical Lazarus.

The iconic Bowie put together Lazarus with Enda Walsh in 2015, and it was one of the last works he completed before his death on January 10th, 2016, two days after his sixty-nineteenth birthday. That death shook not just the musical world but the Earth as a whole, and is still reverberating. Before and after his death, new Bowie material has been released on his birthday [note: also shared by Elvis Presley, Graham Chapman – and your correspondent], from his 2013 single “Where Are We Now?” (QRO review) to his posthumous No Plan EP (QRO review), which was him performing his original songs for Lazarus. For 2021, a recorded performance of it will livestream all weekend, from his birthday to his death-day. 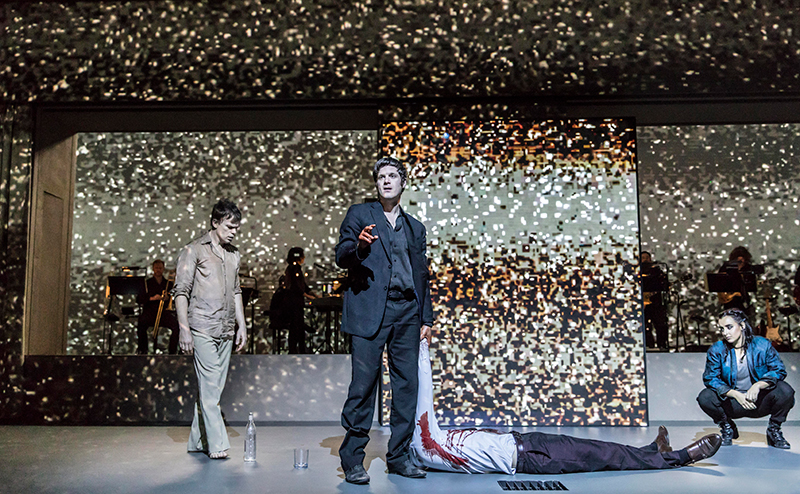 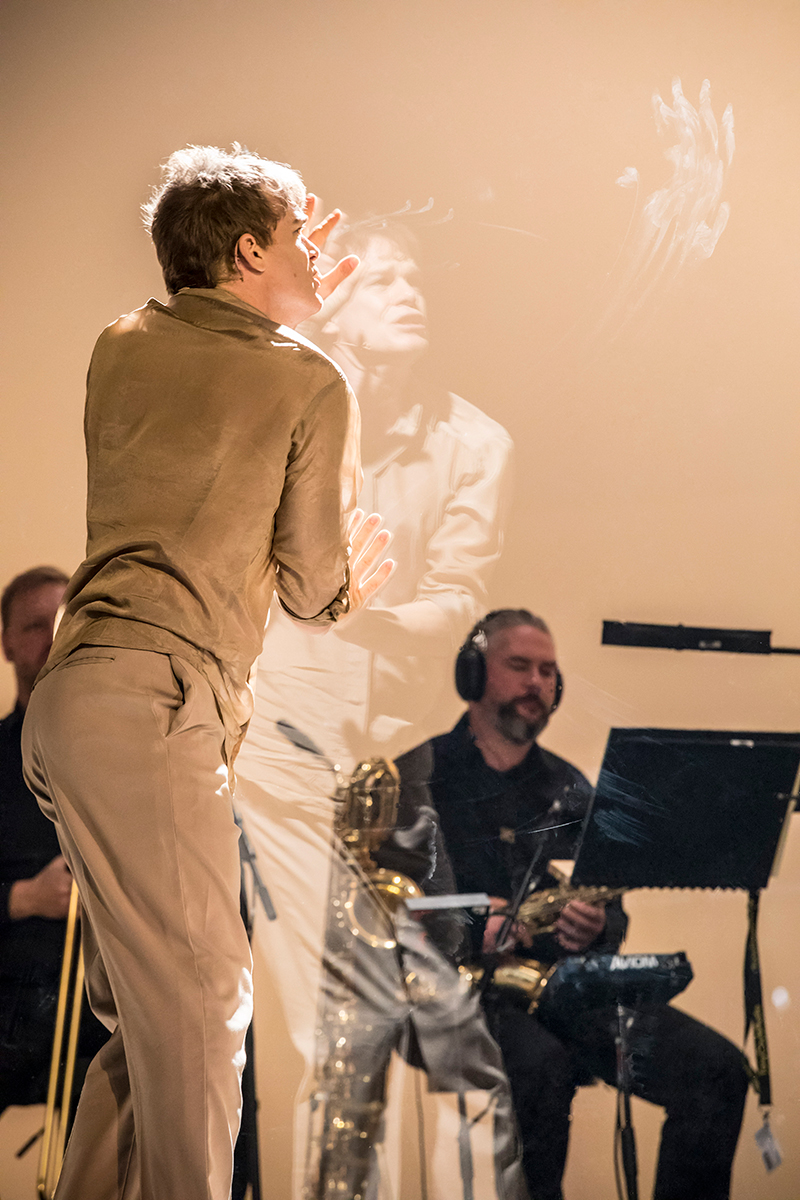 Lazarus is based around a collection of David Bowie’s songs, but it is not some slick, get-rich-quick, ‘play the hits’ Broadway moneymaker. Instead, it takes both well-known, lesser-known & original pieces, and puts them together around a story based off of The Man Who Fell To Earth, both the original 1963 Walter Tevis novel, and the 1976 Nicolas Roeg film adaption that Bowie memorably starred in, the tale of an alien who ‘fell to earth’ in order to save his dying planet, but succumbed to the planet’s corruption and vices. Lazarus starred Michael C. Hall, a.k.a. Dexter of Dexter, as the main character, Thomas Jerome Newton. While it debuted in Bowie’s home of New York City, including starring Cristin Milioti (the long-awaited mother of How I Met Your Mother), and the original cast recording was from them, the filmed version was from London (with British thespian Amy Lennox in Miloti’s role), and had previously been shown for one night only in May of 2018.

The play actually seems to take place well after the events of Earth, sort of a sequel, in a very Bowie way (think “Ashes to Ashes” as the pseudo-sequel to “Space Oddity”), with The Man having locked himself away in an NYC apartment. Michael C. Hall is pretty much perfectly cast as the very human alien Newton, having previously played the rather alien human Dexter. These aren’t the first times that he’s experienced emotions, but he still doesn’t know how to handle them, how to handle still being alive (“I’m the dying man who won’t die”). It is obviously very tricky to play basically the David Bowie stand-in, and Hall has the skill and clout to make it his own role (he also has his own music chops, fronting his own band Princess Goes To the Butterfly Museum – QRO photos). 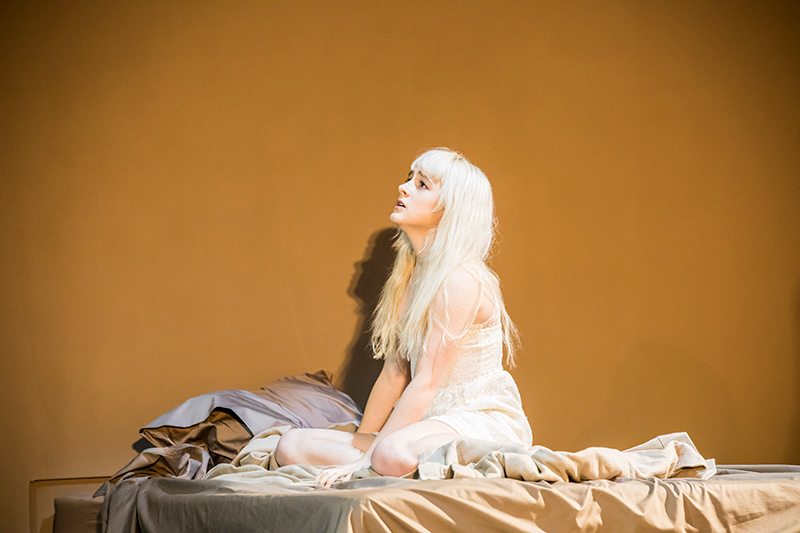 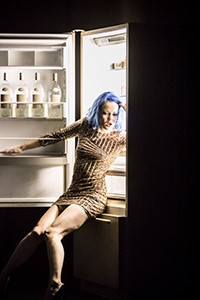 That’s also the case with the song performances. We all have done our own Bowie impressions, even if just in the shower, singing like we’re Ziggy Stardust (or at least a Spider From Mars). Hall and the entire cast don’t sing like a cover band, but also don’t pretend as if they’re not influenced, as if they’re not doing their own Bowie. Hall walks the fine line, leaning into the conflicted, confused emotions of the character, rather than what you might think Bowie would do. The women of the play such as Lennox and Sophia Anne Caruso nicely reposition the songs from the female perspective; Bowie was groundbreakingly transgender in his art, easing the shift, but these are still original takes.

QRO won’t lay out the story, and admittedly it is far from straightforward (there are characters who are only in Newton’s head). Upon the musical’s debut, some theater critics thought it all “pretentious rubbish,” and if you don’t like oblique, symbolic theater, this is not for you. The emotions are also quite grand, which fits when you’re watching live in a crowded venue, but can be a bit much on your computer screen, if you’re used to stoic dramas and ironic comedies. But that also really draws you in, makes it all meaningful without an eight episode binge. If you’re thrown at first by Michael C. Hall clearly going crazy, then everyone else doing the same, pretty soon you’re right there with them. 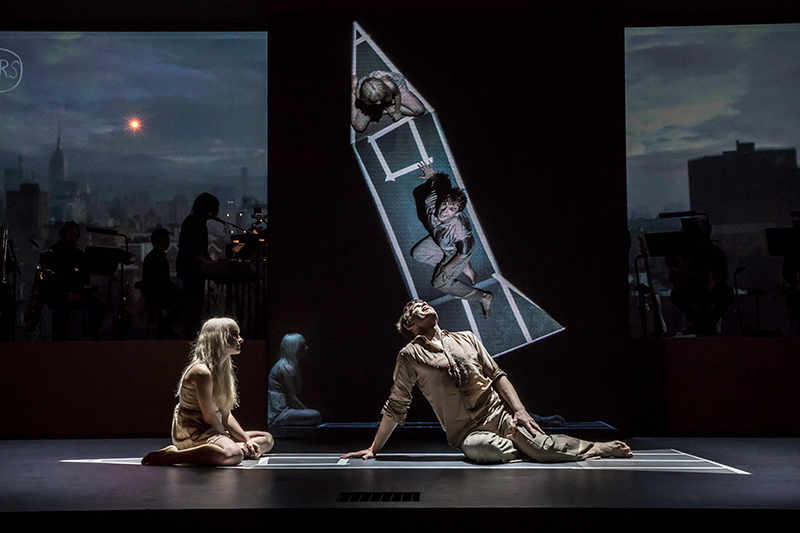 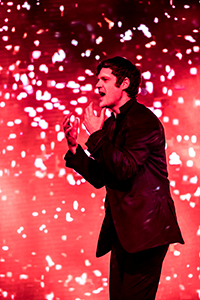 There are eighteen Bowie songs in total, and a number of standouts. Obviously, the originals such as the titular first piece, where Hall defines his definition of his character, both Bowie and not, both The Man and not, but also the powerful penultimate duet “When I Met You”. There are some ‘hits’, including an early “The Man Who Sold the World” by Jamie Muscato as Newton’s despondent former business partner, both a great early reinterpretation of a Bowie classic, and an early other viewpoint; Caruso delivering the had-to-be-in-it “Life On Mars?” with the female voice that the lyrics always asked for; Lennox making “Changes” a working woman’s anthem; and the giant ““Heroes”” closer. But there are also pieces you might not know, from Caruso’s “This Is Not America” (off the soundtrack to 1985’s The Falcon and The Snowman) to “Valentine’s Day”, a contribution from Bowie’s 2013 return The Next Day (QRO review), by a devilish Michael Esper in the character of the same name.

As said above, this is not solely a Hall/Newton story, with multiple characters following their own dramatic arcs – and singing their own songs. One particular flourish of the show is that, even when other characters are doing other scenes that he’s not in, Newton watches and reacts, but struggling to understand (major credit to Hall and others for moving on stage to stay close, but not touch). Esper reminds of Iwan Rheon as Ramsay Bolton, but as troubled rather than evil, and brings the dark glam to the musical. There is even a ‘Greek chorus’ of sorts in three female singers, the Furies to this story, with that appropriate in-your-face attitude. 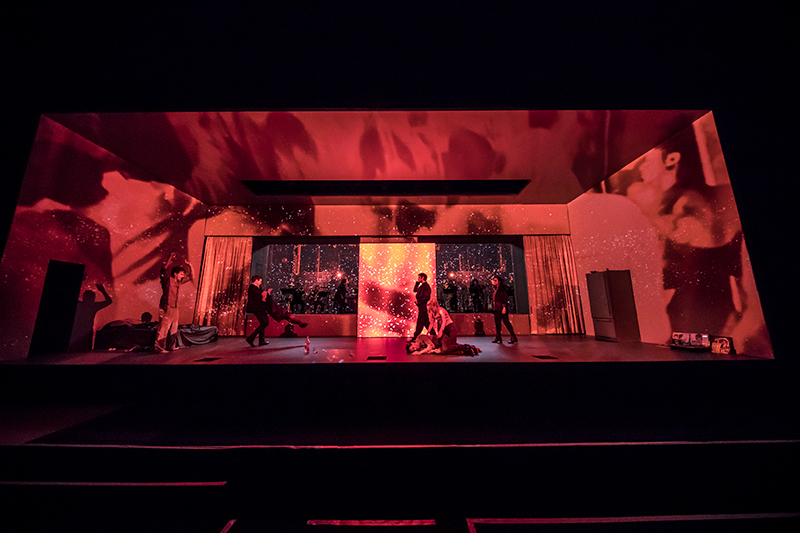 The camera work of the livestream also highlights the great stage set-up. There is a screen in the middle, where characters appear and then step out of (from behind), sometimes showing the stage action before it occurs, showcasing Newton’s fractured view. The screens multiply at times for maximum effect. And the orchestra band plays not from some unseen pit, but behind the screen, lit up when they perform (and get duly acknowledged by the cast after bows, along with a big image of The Thin White Duke himself).

We are all in a very weird place right now, and this planet might seem alien to you. [note: your correspondent watched his press preview of Lazarus while people were storming the U.S. Capitol] We’ve lost so much that we used to rely on, from live performances to beloved figures (the livestream comes out the same day as the broadcast of Alex Trebek’s last Jeopardy!). This weekend, step into David Bowie’s compelling world, both alien and all-too-human. 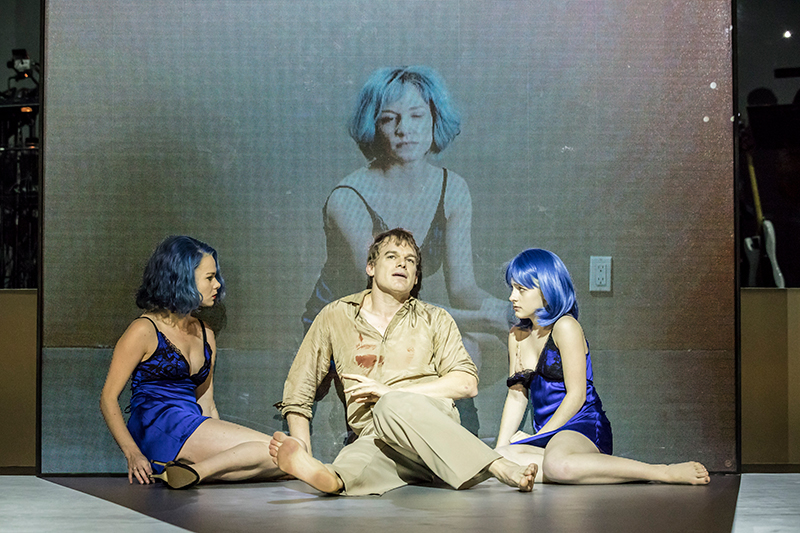