<img src="http://www.qromag.com/wp-content/uploads/2012/11/davidbyrnestvincentlovethisgiant.jpg" alt="David Byrne & St. Vincent : Love This Giant" /><br /> <i>Love This Giant</i> can't be as good as one could hope from such a pairing as... 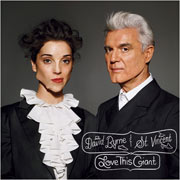 Collaborations are all the rage these days, but when it was announced that David Byrne (of The Talking Heads, as if you had to be told) and Annie Clark (a.k.a. St. Vincent – QRO spotlight on) were teaming up for a record, that still stood out.  In Byrne you’ve got one of the modern world’s iconic songwriters (he even recently wrote the book on it, How Music Works), and in Clark one of today’s hottest alt-commodities.  They had met at a couple of benefit concerts in NYC for other collaborations (like compilation Dark Was the Night – QRO review), and Byrne guest-spotted at Clark’s Lincoln Center performance (QRO live review).  Maybe a song would come out of it (like Clark’s with Bon Iver on Twilight: New Moon soundtrack – QRO review), but a whole album?  Of course, Love This Giant can’t be as good as one could hope from such a pairing – but it also couldn’t be anything less than good.

Like most pair-ups these days between established-in-their-own-right songwriters (such as Divine Fits – QRO album review), Love This Giant is roughly divided between Byrne songs and Clark songs.  However, they do take in the other’s abilities – St. Vincent harmonies on Byrne numbers like single “Who”, “Dinner For Two”, and “Lazarus”, while Byrne-sian disjointedness on Clark pieces such as “Weekend In the Dust”, “Ice Age”, “The Forest Awakes”, and “Lightning”.  Comparatively, the Byrne-led songs are superior – Clark’s harmonies are easier to pull off than Byrne’s disjointedness – but few people’s songs can match your favorite Talking Head.

Love This Giant couldn’t be more than the sum of its impressive parts – but there was also no way it wouldn’t work.  This is not some random pairing (i.e., Lulu – QRO review), or ‘too many cooks in the kitchen’ – Byrne and Clark work very well together on this still impressive album.