Click here for photos of deadmau5 at Austin Music Hall in Austin, TX on September 14th, 2011 in the QRO Concert Photo Gallery

It is very easy to completely dismiss deadmau5 as a gimmick.  The electronic artist (sometimes known by his human name of Joel Zimmerman) wears a giant mouse head when he performs, spells his name with a number, and is a self-proclaimed advocate for the post-DJ movement.  But something about this Toronto native reeked of authenticity when he came to Alliant Energy Center in Madison, WI on Tuesday, October 19th.

Perhaps it’s that he has worked with some of the greatest electronic artists of our generation including Daft Punk and Tiësto – or because he has a passionate understanding for the intricacies of music and is an avid and talented producer.  It could be due to Zimmerman’s prowess with lighting and visual effects, and his affinity for putting on shows that rival New Year’s firework displays – or that he’s been nominated for a Grammy and won a Juno Award.  But honestly Joel’s success can be attributed to sharing a last name with the greatest songwriter and one of the greatest artists in the history of music…

Click here for photos of deadmau5 at 2010 Sasquatch! Music Festival in George, WA in the QRO Concert Photo Gallery

In the past two years, deadmau5 has gone from being virtually unknown to an international sensation, thanks to the hegemonic hype machine that is the blogosphere. Since his debut record, Random Album Title (2008), deadmau5 has amassed formidable and respectable buzz from a bevy of blogs, magazines and, of course, listeners. In this musical age, where the heterodoxy of electronic and post-techno elite threatens to disrupt the balance and position of longhaired guitarists and faux-gravel frontmen, Zimmerman leads the pack. Claiming to, “Rather not fly halfway across the planet to hit a spacebar and do a couple of fist pumps,” deadmau5 is a unique kind of electronic artist that combines lights, visuals and costume to put on one hell of a show.

Now, a deadmau5 show is not so much a conventional concert, as it is an intense audio/visual barrage. Free from the confines of a DJ booth, Zimmerman stands tall and Zeus-like atop his giant cube that has become the defining point of a deadmau5 experience. ‘The Cube’ as it has come to be known, is a seizure inducing, Daft Punk-shaming, visual smorgasbord. Iconic in nature, the only fair comparison is Stanley Kubrick’s Space Odyssey monolith: epic and clearly the work of alien technology. 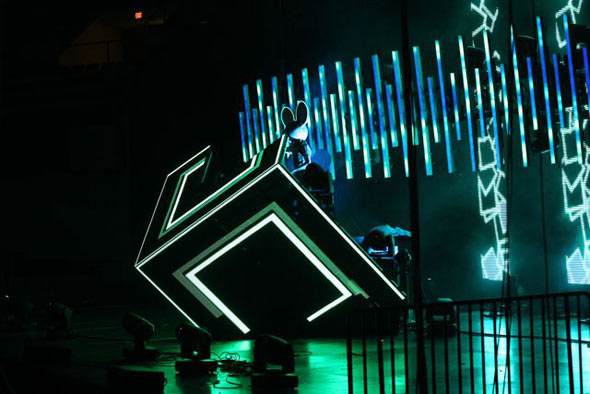 Despite the show beginning at 7:30 and having three openers, true Mau5 fans showed up at six, due to rumours of limited floor space. There were 2000 wristbands (which were required to get on to the floor) given out on a ‘first come, first serve’ basis, and within 20 minutes, they were all gone. This meant that the casual concert attendee, who arrived on time albeit too late for a wristband, was confined to the Alliant Center’s seats. This did not stop folk from dropping a good five feet – from seating section to floor. Thus the security staff’s main focus for the night, involved stopping drunken Collegiates from running onto the coveted and overcrowded dance floor.

The three openers collectively played for an hour, and successfully set the tone for a night of ecstasy-fuelled dancing. Skrillex stood out with his overwhelming dub-step mixes, but both Nick Nice and Dirty Disco Kids thoroughly entertained. But everyone was waiting for their favorite rodent, and when Zimmerman entered the stage, wearing his cartoonishly large mouse head, the crowd went wild.

Forgive your correspondent for not being able to name the songs in which deadmau5 played, or the order in which he played them, for he was too transfixed and aurally stunned to take notes.

As an artist, Zimmerman seemed elated as he sonically assaulted the crowd of thousands. And he danced as much as his crowd. Maniacally shaking his body in rhythm to the music, deadmau5 did a whole lot more then just “press a spacebar.” This is a comforting thing in our age of aloof DJs who stand in frozen poses, or just look generally awkward on stage: a la David Guetta (QRO album review). If the artist does not appear to be enjoying his own music, then how can he expect his fans to?

Though deadmau5’s light show surpassed expectation, the music itself got repetitive after a while and tedious soon after that. Stripped of the impressive, and no doubt expensive, visuals, Zimmerman’s music would have not been very interesting. Towards the end of the night the music got too obscure and outré for dancing and the crowd became restless. Many left early and many others began to throw glow sticks, cups and anything else they could find (including a bra) at the poor creature. This is perhaps what led Mr. Zimmerman to remove his mouse head and up the intensity a significant number of decibels. The show ended on a high, and as the lights turned on and deadmau5-turned-Joel Zimmerman exited, the audience gave him the applause he deserved.

A deadmau5 concert is an experience unrivalled in today’s music scene. Despite a weak middle and an unvaried selection of songs, the night will surely be remembered as one of Wisconsin’s premier music events for the year. 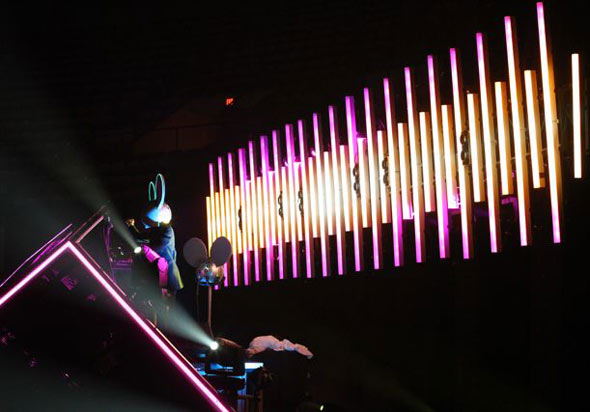