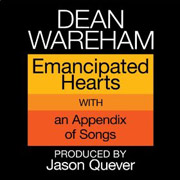 Dean Wareham has done a lot of things that aren’t strictly ‘Dean Wareham music’.  First he fronted acclaimed alternative acts Galaxie 500, then Luna, and then finally went semi-solo, with wife/Luna bassist Britta Phillips as Dean & Britta (QRO spotlight on).  He released an autobiography, Black Postcards (QRO review).  He & Britta did 13 Most Beautiful… Songs For Andy Warhol’s Screen Tests (QRO live review), music to accompany the famed artist’s ‘13 Most Beautiful’ screen tests.  Most recently, he has been performing Galaxie 500 songs (QRO photos).  Now the musician finally slaps his own name on an audio release in Emancipated Hearts, this year’s EP before next year’s first ‘Dean Wareham’ full-length, Dean Wareham.

Emancipated Hearts easily could have been just a glorified teaser single of “Emancipated Hearts”, and it does have a remix of the title track, but it’s more than that – and different.  For starters, it doesn’t start with “Hearts”, but rather “Love Is Colder Than Death”, which sees a slightly country Wareham.  Furthermore, the following “Hearts” might actually be the weakest song on the EP, as it feels a bit simple compared to other songs on it & prior Wareham works.  Indeed, this is the rare case where the remix (by My Robot Friend) is not only worth adding to the release (unlike most superfluous remixes), but perhaps even better than the original, an indietronic spin on a decidedly not indietronic artist.  Other pieces on the seven-track release include an almost folk Wareham in “The Deadliest Day Since the Invasion Began”, a relaxed “The Longest Bridges In the World”, and sweet “The Ticking Is the Bomb” and “Air” (the only piece without a long title…).

Decidedly a ‘Dean Wareham release’, Emancipated Hearts is not a reinvention but a stripping down of the artist, to his strong core.