QRO turns its spotlight back onto two of the most beautiful people in indie-rock, Dean & Britta. ... 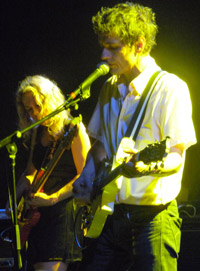 QRO turns its spotlight back onto two of the most beautiful people in indie-rock, Dean & Britta.

Review of Back Numbers

Review as part of CMJ Day One at Bowery Ballroom in New York, NY on October 16th, 2007

Live review of 13 Most Beautiful… show at Prospect Park Bandshell in Brooklyn, NY on August 1st, 2009

Photo gallery of Dean Wareham from Primavera Sound Festival in Barcelona, Spain on May 29th, 2011

Photo gallery from Royale in Boston, MA on November 3rd, 2011

Review of Luna (with Phillips & Wareham) at McCarren Park for Northside Festival in Brooklyn, NY on June 11th, 2015

Review of Dean Wareham’s I Have Nothing to Say to the Mayor of L.A.