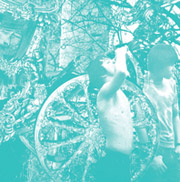 The prolific Bradford Cox & Deerhunter have included a bonus disc of all-original material, Weird Era Cont., with the recent release of Microcastle (QRO review).  Microcastle took the high electronic wash of Florescent Grey EP and singer/guitarist Cox’s solo project, Atlas Sound (QRO album review), to new heights at its beginning and end, but it was weighed down a bit by a relatively stripped middle.  However, Weird Era embraces the high wash from start to finish, and while not hitting the pitch-perfect tops of Microcastle, the atmospheric record is actually a more solid representation of Deerhunter.

Click here for photos of Deerhunter at Hudson River Park in New York, NY on August 12th, 2010 in the QRO Concert Photo Gallery

Click here for photos of Deerhunter at 2010 All Tomorrow’s Parties in Minehead, U.K. in the QRO Concert Photo Gallery

Click here for photos of Deerhunter at McCarren Park Pool in Brooklyn, NY on August 3rd, 2008 in the QRO Concert Photo Gallery

The tracks on Weird Era really flow into and out of each other, making them a little difficult to separate, but giving the album a more together feel, something Microcastle lacked at times.  The repeating electronic guitar wash of “Backspace Century” introduces Weird Era well, with more of a danceable beat in the following “Operation”.  While the sharper nature of “Dot Gain” is not for the best, the speedier wash of “Vox Celeste” is.  Similarly, “Vox Humana” drones a bit, thanks to a relatively monotone, spoken Cox, but the grander “VHS Dream” washes over you and there’s more power to the press of “Focus Group”.

Unlike Microcastle and 2007’s Cryptograms), Weird Era does not begin with an instrumental “Intro”, but the instrumental bill is more than paid back later.  First there is the sub-minute “Ghost Outfit” early on, then the twinkling and jumbled “Cicadas” in the middle.  But it is the end where Deerhunter’s high instrumental wash goes full-bore, with four separate tracks.  While “Slow Swords” is too small and simple, and “Weird Era” a screeching, scratching wander, “Moon Witch Cartridge” finds a strummier, catchier march to the band’s wash.  Finisher “Cavalry Scars II/Aux Out”, at over ten minutes, is a high, expansive, ambitious summing up of Deerhunter as a whole, somewhat revelatory for a ‘throw-in’ record.

Instrumentals take up just about half of Weird Era’s running time, which was probably why it was made a bonus disc to Microcastle (Cox also accidentally leaked an unmastered copy in August via a post on his blog that led to his entire music folder).  In that respect and others, Weird Era Cont. isn’t a record that’s going to make people sit up and take notice.  But it is one that will wash over them well.