One thing is very clear: Whatever the lyrical context or the musical content at play here, Dan Bejar's latest album as Destroyer does anything except go 'Kaputt'.... 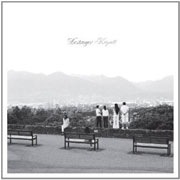 Out of all the things we of the great white north are known for, jazz is likely as far down the list as warm weather.  That’s not to say it doesn’t exist here; in fact, the genre has found a home in a new generation of Canadian artists such as Charles Spearin (QRO interview) and Brasstronaut (QRO album review) – oh, and Alberta can get pretty humid sometimes.  Rocky Mountains aside, the continued evolution of one of Canada’s brightest songwriters sees yet another name to add to the list of jazz infusing Canucks.

Kaputt marks the fourth album in three years for Destroyer’s Dan Bejar.  That the Vancouver native has time to write music of his own, let alone record and tour it on top of his work with New Pornographers (QRO live review) and Swan Lake (QRO album review) is impressive enough, but it’s the finely tuned quality of all three groups lately that’s truly astounding.  Swan Lake’s last recording turned heads across the continent, and the New Pornographers recently built upon their already outstanding discography with 2010’s Together (QRO review).  Despite Bejar’s packed schedule and other musical and creative outlets, his ninth full-length album is no slouch either.

Kaputt opens amidst a blend of chamber folk, synth pop and that infectious jazz sound – a recipe that’s at the heart of most of Destroyer’s thirteenth release.  Opener “Chinatown” leads into “Blue Eyes” just as Bejar’s diverse arsenal of synth settings seems to lead into an ever-steady beat of percussion early on.  Much like Beirut’s electronic material, that already impressive layering allows for frequent brass improvisations and guitar cameos, until the song’s many echelons simply envelop you.  “Poor In Love” and the title track do this best, but each song is an experience in itself thanks to Bejar’s crafty song writing.

In terms of his oft-cryptic lyrics, the band’s sole member addresses Destroyer’s signature trait early on, claiming, “I write poetry for myself” on the aforementioned second track.  Although his pen may veer off into odd avenues and eclectic side streets, the scenic route proves itself worthwhile – especially on the album’s closing track.  “Bay of Pigs” sees Bejar model his writing in a cross between Leonard Cohen postmodernism and a nineties beat-poet.  As the album fades amid his promises of “soon”, one thing becomes very clear: Whatever the lyrical context or the musical content at play here, Dan Bejar’s latest album does anything except go Kaputt.